Nine Consecutive Years of Protests Against Police Repression in Argentina 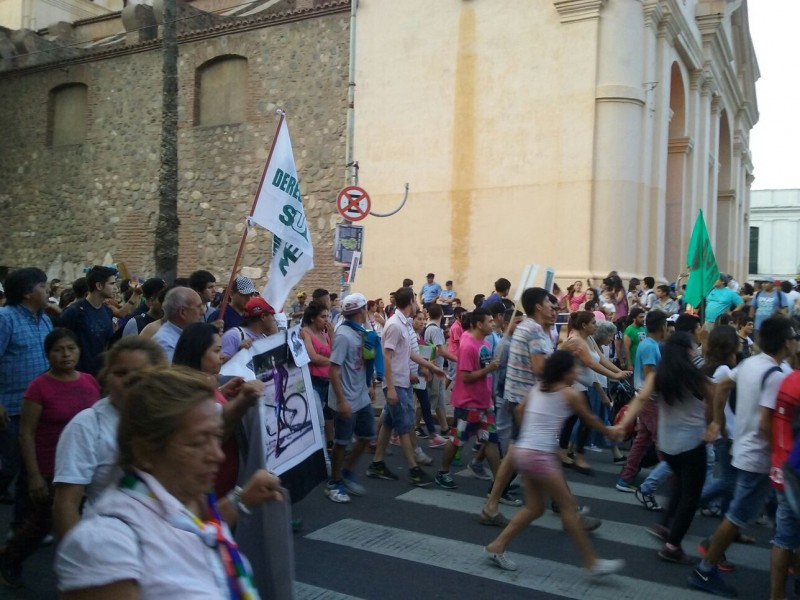 The ninth edition of the “Marcha de la Gorra” or “Cap March” was carried out this past 18th of November. The protest, in which young representatives of social organisations and victims of abuse by those in authority march against the actions of the questionable Cordoba Province Police, took place in the province's capital.

For nine years this march has sought to end police abuse in the second largest city in Argentina. One of the participants’ main claims is the repeal of the Offences Code and the end of unjustified controls, humiliation and abuse of authority, as well as the plea for justice for the victims of police violence:

The name of this mobilisation, “Cap March”, is an allusion to the stigma attached to young people coming from modest areas for the way they look and dress, as is demonstrated by the following stories circulating on Twitter:

As explained in a blog named Resisting the Offense Code, there is a Cordoban province law that punishes certain conduct that “impairs daily life, so as to facilitate coexistence”. Nonetheless, this definition is ambiguous since it allows room for interpretation when identifying disturbing behaviour. Or, as in most cases, it limits “the exercise of rights that appear in the National Constitution”.

An example of this is the figure of the “marauder” (art. 98), that arrests anyone who shows “a suspicious attitude” nearby buildings or vehicles. It is the police's responsibility to determine what “suspicious” means, and as such: any stroll on the street can become a “maraud”, states the blog. Another offense refers to “tumultuous public meetings” (art. 99), in which officers decide what qualifies as a disturbance and can arrest anyone at the march (even if they do not take part in or cause the turmoil). The blog goes on to state that “this can limit the right to free expression and the right to petition the authorities (art. 14 of the Constitution)”.

Even though official data concerning the quantity of arrests is scarce, poorly systematized and not regularly updated, according to a study conducted by researchers at the Córdoba National University, in 2011 there was a total of 42,700 arrests for infringements to the Offense Code.

This figure reflects an increase in the number of arrests in comparison to previous years. At present, social organisations estimate that there is an arrest every 7 minutes due to “violations of the Offense Code”:

New Cap March. Find out the numbers of police abuse

These numbers reflect a notion of government based on bulky investment in security to the detriment of health and education, just as the report by the investigation group Llano en Llamas indicates:

[…] The same happens if we comparatively analyse the expenditure per capita in 2015: the ‘Initial and Primary Education’ category registers a total of $1,311 per inhabitant; the budget for the ‘Health’ category implies $1,734 annual spending per person; and for the ‘Security and Justice Services’ category, the amount is $2,255 per capita.

The outcome of this “security” policy is measured by the quantity of arrests carried out by the provincial police. As such, there have been complaints concerning institutionalised practices to incentivize arrests amongst police officers, with or without motive, in order to account for the effectiveness of police authority, therefore justifying the high level of spending on security.

The “Cap March” protests against this repressive security policy, which is intended to replace the social and educational policy. During the latest protest, participants publicised a document in which they explicitly expose their complaints and requests, particularly against the governor of the province, José Manuel de la Sota, who is responsible for the security policy that is in force:

DLS [abbreviation of de la Sota] you are mistaken: We are family and friends of victims of an easy trigger, never of police officers who steal guns and plant them in our neighbourhoods, nor of the murderers commanded by criminals like you and Julio César Suárez.

We are the biggest and most systematic March in Córdoba and the COUNTRY, who claims its popular cultures and strongly repudiates this police State that excludes us, represses us, persecutes us, stigmatises and kills us.

The ninth edition of the march counted on the support of educational, social and workers’ organisations, such as:

Not one lad less: The ninth cap march “marauds” for Cordoba

On this occasion, even some sectors of the Catholic Church supported the protest:

25 catholic priests at the cap march

The magnitude and significance of this march is not solely for the most modest areas, it involves all Cordoban citizens collectively, especially the youth. The claims and questioning of the legitimacy of the police authority overcome educational, economic and social barriers.

Even though the march took place in a peaceful and festive environment, an outdoor broadcast unit belonging to a local television channel, Canal 12, was criticized for its coverage on the subject, which ended in vandalism.

Vandalism in the cap march – The Morning Show – Cordoba

In sum, the topicality of the claims of citizenship in the so-called mediterranean province of Argentina was reasserted by new complaints of young individuals being arrested without any motive. In this context, young engineering students also denounced new police abuse against them on social media.