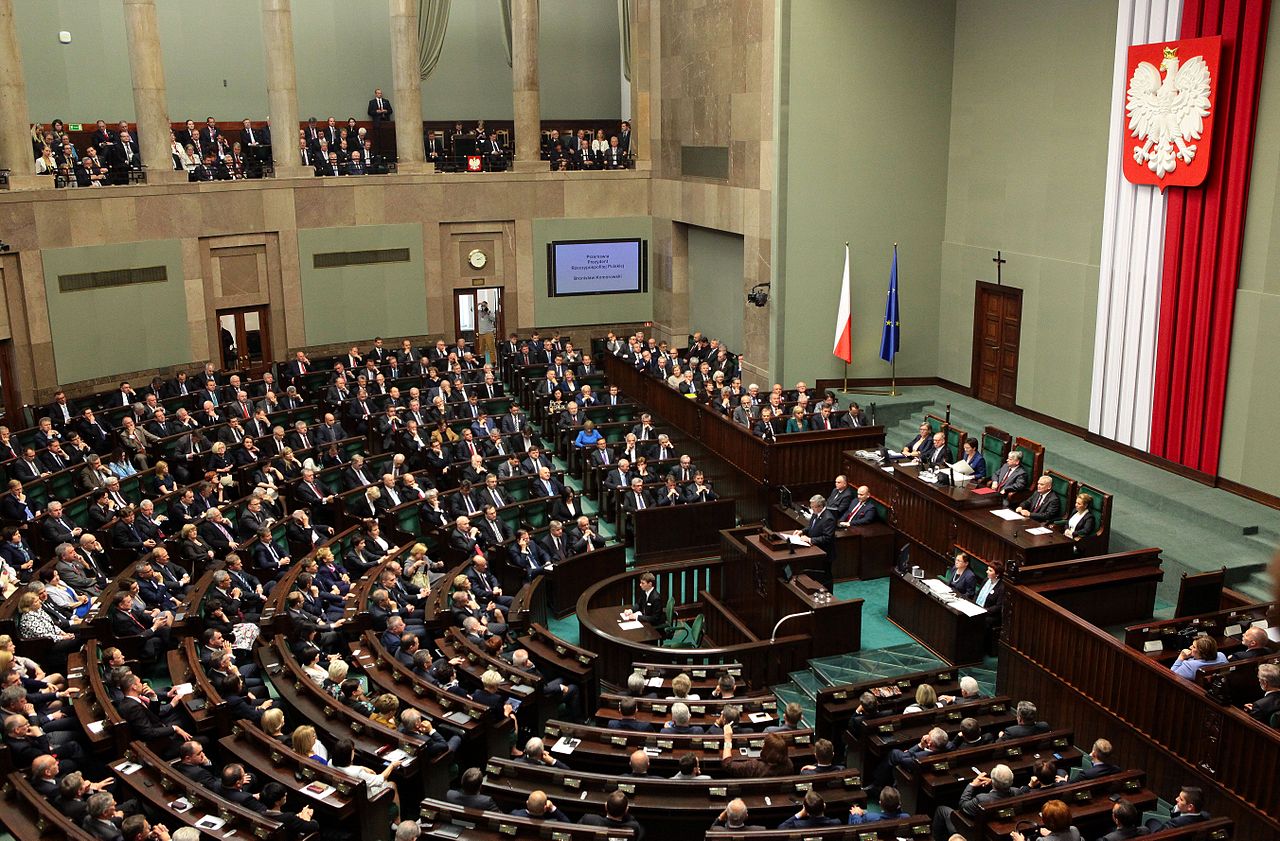 Several dozen people spontaneously gathered on Wednesday, November 25 in front of the Polish Parliament building, ignoring the late hour and below-zero temperature, to protest the latest resolution passed by Parliament during a special night sitting.

It wasn't the first time since the recent elections that an important decision was brought in a rush, during the night, making it impossible for either the public or the opposition to discuss the bill before it was put to the vote.

If all this is to go on, we should change Parliament's agenda from a daily agenda to a nightly one

The highly controversial resolution passed by the newly elected ruling party, Law and Justice [3], cancels the appointment of five judges to the Constitutional Tribunal [4], who had been appointed by the previous parliament. Many authorities on the country's constitution have gone as far as claiming that the new resolution is unconstitutional and, hence, illegal. This decision not only seems to ignore provisions of Poland's Constitution, but also breaks one of the oldest rules of any legal state — that laws cannot and should not be retroactively applied. What makes things even more complicated is the fact that such a decision could only be made null and void by the Constitutional Tribunal itself, if it were to discover the incompatibility between the act of choice itself, and the law on which it was based.

Marcin Deutschmann [5] attached a video from the demonstration, saying:

And so it begins…Quite fast…

Around 40 people gathered in front of the Parliament, people are getting fed up quite fast.

I go to sleep keeping my fingers crossed for those in front of the Parliament.

Although the decision is mostly seen as unconstitutional, it has its supporters.

Nitras [another Twitter user] writes that crowds are gathering in front of the Parliament. The only ones present were Stefan, Ligia and families of those who have just lost their cushy jobs

Many people seem to think the protest is temporary, doubting the ability of citizens to get politically involved.

So as for tonight's events both on the lawn in front of the Parliament and in the Parliament itself (I have no clue what's going on) are they going to influence an average guy or is it just bullshit?

There was a protest once, called by the [former ruling party, now opposition] Civic Platform, there were a lot of them in front of the Parliament building. It lasted bravely till the first drop of rain.

Attaching a picture of events in Jakowice, Marcin Strzymiński [19] noted:

More people have come to protest the construction of a power line in Jankowice city than to protest in front of the Parliament.

The following day, November 26, almost 200 people gathered in front of the Parliament building. “Keep your hands off of the Tribunal,” was the only demand of the protesters. The protests and discussion continued into the early days of December, as Parliament prepared to vote on the appointment of five new judges on December 2.

Ahead of the December 2 vote, legislative expert and member of Law and Justice Stanislaw Piotrowicz accused the former ruling party Civic Platform of appointing certain individuals to the Constitutional Tribunal in order to use the tribunal to “block reforms” that Law and Justice has promised in its recent campaign. The accusations against Civic Platform of politicizing the Tribunal are not unfounded, as the previous choice of the judges was made in the transition period, and two out of five judges would rightfully be elected by the new Parliament (with Law and Justice majority) if it wasn't for a convenient transitional provision in the new law regulating the Tribunal, passed on 25 June by Civic Platform, giving it the right to choose all five judges.

The newly appointed judges still remain to be confirmed by President Duda, which he reportedly began doing as soon as the appointments reached his desk. On December 3, however, just as President Duda had confirmed four of the five judges, a new ruling came from the existing Constitutional Tribunal, stating that three out of five judges appointed to the court by the previous ruling party — which the controversial November 25 vote had aimed to remove — were in fact legally nominated and should keep their appointments.

The new resolutions are part of a wider debate about the functioning of the Constitutional Tribunal, which has been going on in Poland since June 2015 — starting with these new developments have caused a major political row in the country. Many experts see current events as an effort to break the balance in the tripartite division of power and as a true threat to Polish democracy.

This article is a brief report on current events. Situations described are part of a broader picture, with chain of events starting way before today’s Parliament was elected. A complex article on the whole issue is to be published soon.