A screenshot of the Jambole video from YouTube showing Alex Ssempijja (in a red shirt) dancing.

A member of Ugandan dance group the Ghetto Kids, Alex Ssempijja, died on November 30, 2015 at the age of 14 after a bicycle accident. Alex danced in the popular Ugandan music video for the song “Sitya Loss”. The video, which went viral, received over 15 million views.

Alex was riding the bicycle with his fellow dancer, 12-year-old Patricia Nabakooza in Makindye, a Kampala surburb, when the brakes malfunctioned. The pair were thrown onto stones and a house veranda on the roadside, which cut Alex's throat. He was later pronounced dead in the hospital.

Patricia is currently in the intensive care unit at Case Clinic Kampala where doctors say she is responding well to medication despite online rumors that she also passed away. The #PrayForPatricia hashtag is being used to send quick recovery messages to her.

The kids troupe got international recognition after appearing in the Sitya Loss video in 2014. The song also saw the musician behind the hit track, Eddy Kenzo, win the BET Viewer's Choice Best New International Artist.

The YouTube video below is the music video for the song Sitya Loss:

The group has appeared in many other of Eddy Kenzo's videos, including Zivuga, So Good and Jambole.

The YouTube video below shows the group dancing to the song Jambole: 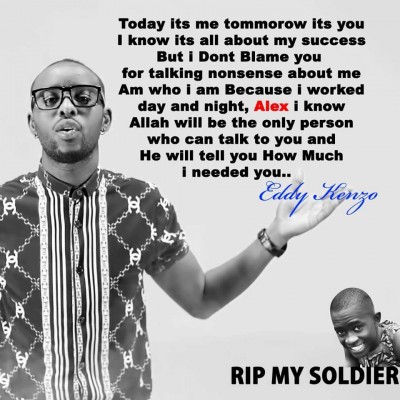 Eddy Kenzo's tribute message to Alex, which he shared on Facebook.

Many Ugandan celebrities and netizens took to social media to express their shock and offer their condolences to the fallen young superstar.

Kenzo shared a photo and message on Facebook expressing “how much I needed you” in his musical career. He also alluded to rumors circulating that he was somehow involved in Alex's death. He asked the family to let the body of Alex spend a night at his office premises because he felt it was a better place for his fans to pay their last respects.

Kenzo also shared his photo with Patricia and Alex, saying:

Alex my young brother your legacy you left as a dancer in this industry will always trend your skills going to inspire a lot of kids from the ghetto and you will always be remembered as a great man who once lived in this dancing fraternity.‪#‎Alex‬ may your soul rest in peace….my young brother..you will forever be my super star. I can't stop crying my Salongo banange. 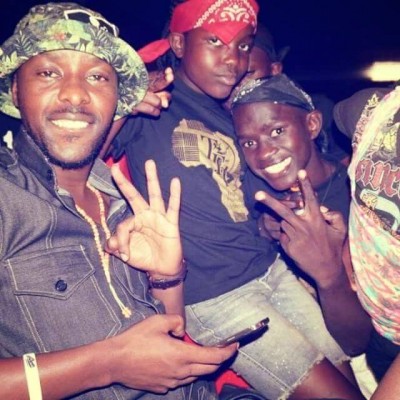 Another Ugandan artist, Jose Chameleone, posted the following on Facebook:

I am really saddened by the Death of a youngstar Alex Ssempijja. All of us are with your Family, Fans and Friends in this sudden loss! You are gone to soon and left us the Memories of your always happy Character from since we Watched you dance in “Sitya Loss” May the lord strengthen Eddy Kenzo and team as we all pray God Rests your Young Soul in Eternal peace.We pray for The Lil’ Patricia who is hospitalized. May the Lord lay his healing Hands on you.

RIP Alex (of Sitya Loss), in your short life, you have impacted the world through dance, more than some will ever do in a lifetime. Your purpose on earth has been fulfilled. Continue to dance with the rest of the angels in heaven.
We continue to lift Patricia up in prayer.
Eddy Kenzo, praying for you bro. Be strong.

While Geosteady, a Ugandan artist, could not believe the news:

It's unbelievable for the loss of Alex (I call him Salongo) one of the dancers in Sitya loss. Ooooooh… https://t.co/tuKHxv4Jzn — Geosteady imagine (@geosteadyOffici) November 30, 2015

Alex was laid to rest on December 2, 2015, in Kibibi at his ancestral home, about 100 kilometers from the capital, Kampala.