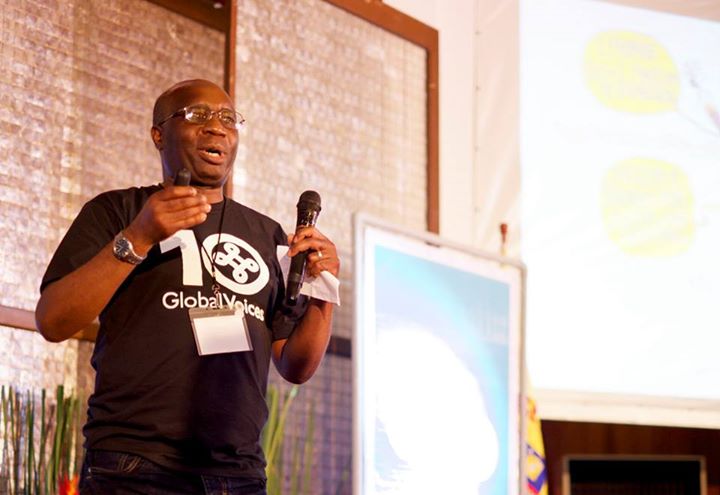 Humble. Jovial. Patient. Fearless. Following the passing of Global Voices contributor Gershom Ndhlovu in the United Kingdom on Sunday, November 22, 2015, at the age of 51, his friends at GV shared their messages of remembrance of the dedicated Zambian journalist.

Gershom, who will be buried in the UK on December 10, 2015, joined GV in 2010. In that time, he worked with many community members and attended two summits, one in Nairobi, Kenya, and the other in Cebu, Philippines.

Jillian York, a volunteer representative for the Global Voices Board of Directors, wrote on Facebook:

We took this photo in Cebu in January…the last of the party people, the “bad kids”, hanging on for one more drink the night before work started. Today I learned that Gershom Ndhlovu, second from left, passed away yesterday from unknown causes. I'd met him twice—in Nairobi in 2012 and in Cebu—and while I didn't know him well, I won't forget his spirit, his attitude, and his willingness to be one of the bad kids with us. 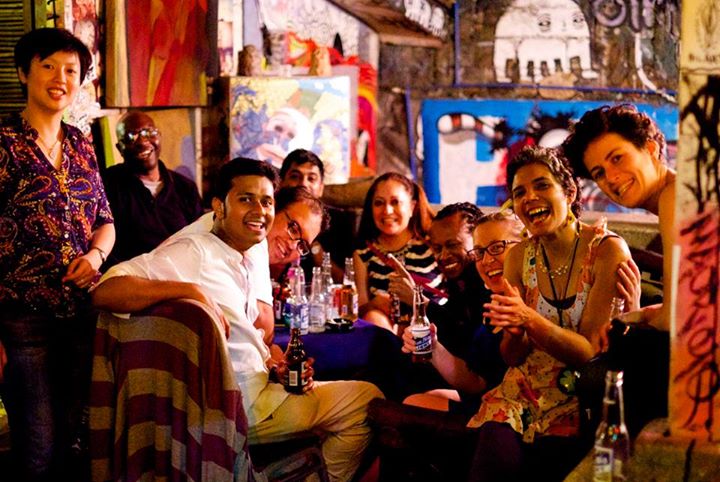 Lova Rakotomalala, GV editor of the Francophone region, wrote on the GV Google group, where most of these messages were shared:

I still cannot believe that you are no longer among us. Writing to say farewell is terribly difficult because we it means your departure is real and I am not sure I am ready to accept it just yet. The only time we got the chance to really talk was at the roof top bar of the hotel in Cebu. We were unwinding from one of the workshop and we just sat there, observing pedestrians trying to cross the intense traffic on one of the main road. You said it felt like home and I knew exactly what you meant. We both called the Southern African region home but as is the case with GV, the bar in Cebu was were we discussed the merits of Mosilager,a Zambian brew and THB, the Malagasy beer and why on earth those beers are not better recognized/marketed. I did not have a chance to get to know you better but I know I will miss you and the unique perspective you brought to the community.

Heartfelt condolences to your family from your extended one at GV. Veloma soava dia,

It is hard to believe that Gershom you are gone. For the first time, I met with you in Cebu where among other things, we had some discussions about African countries political trends including Zambia and Tanzania. I learned that you were such a humble, charming and thoughtful person. May your soul rest in eternal peace our one and only one Gershom.

Hi all.
It has been a very sad news when I learnt about Gershom death. I met him in Kenya during Global Voices meet up 2012. He was a very kind a sociable man.

You took leave for this journey beyond without farewells. What can I say, who dares takes a fight to God's house?

Was it not five days ago that you sent that DM on Twitter telling me that you've been in hospital for nine days? I tried calling but to no avail.

When we met in Cebu this January you were the same jovial and happy fellow – just like our first offline meeting in Nairobi in 2012. You loved your country Zambia. Your posts about the political climate there were both thorough and incisive. A passion that once marked you for an unmerited inline hate.

Gershom you were both a friend and colleague. The age difference didn't count. Your passion for the work Global Voices does, especially the SSA team was legendary. Ever willing and available to ponder issues affecting the community off list.

Ba Gershom Ndhlovu ,
It is sad news to hear of your death. My plans to bring you home as resource person to help train Zambian Journalists in Reporting Elections using new media particularly on Online Radio which is not practiced in Zambia have now been shattered. As political Blogger your works are all over the Internet for our reference to read your opinion on different issues. You supported our right to access to the Internet even as Zambian Bloggers Network we picketed to educate people on Internet Rights. Will greatly miss you and thanks for access to CrossFire BlogRadio. Global Voices and Zambian Bloggers Network mourn you. Rest in Peace

This is such sad news! When I think of the first few months of my job as an editor, I always think of Gershom because he was so generous and understanding as both a person and author, during that time and ever after. I was anxious my first time working with Gershom — I was very fresh to the work and knew practically nothing about Zambia, while Gershom was a seasoned journalist and very much my senior. But this did not phase him at all. He was kind and patient, always happy to explain to me the complex political and cultural landscape of his country and help decipher linguistic particularities of social media in Zambia. For the first year that I worked with GV, we regularly worked on stories about the ever-embattled anonymously-run news site the Zambian Watchdog.
These were regularly among our most-read stories on Advox. I was always so proud of this, and I know Gershom was too — it was a clear demonstration of the value that GVers like Gershom bring to the media landscape, especially when it comes to reporting on countries that are all but forgotten by western media.

Gershom was my roommate in Cebu [the location of Global Voices Citizen Media Summit 2015]. His easy-going, gentle personality, his wit and humour ensured that we had a very special time. At a loss for words. Vale, my friend!

I remember in Nairobi, I shared the seat with Gershom on the vehicle that took a bunch of us from one hotel to the other. When he knew I came from Peru, he started asking me if I had visited La Paz, in Bolivia, as he was intrigued about how people lived in that city, located over 4,100 meters.

I'll always remember this curiosity as I felt related to it!

Gershom was an amazing man. When we met in Cebu, he kept referring to me as Nyabo – lady in Luganda. GV has lost a great writer. I will greatly miss Gershom.

I just met Gershom at the summit in Cebu. He attended GV Radio workshop… He talked about one of his live debates he hosted on his program from London about Zambia's political issues that made headlines all over the country…

I didn't know him much but pretty sure he was a respected and fearless journalist like it says on this headline shared by Rezwan on Facebook:

http://zambiareports.com/2015/11/23/respected-uk-based-journalist-gershom-ndhlovu-dies/
My respects to his family…

Such sad news! Like the others I didn't get much time to talk to Gershom but his grace and wisdom was obvious as soon as you got close. We've lost a great leader and thinker.

Sad to hear this news. I met Gershom in Nairobi. He was a very friendly and humble person. May he rest in peace.

Gershom, I remember our first mails, while I was translating your post about Zambia, asking for help, or context. I remember your ‘easiness’ when we met during the GV summits. Gershom, this is not easy, so let me tell you, in few words: you are a gentleman.

It is very sad to learn of Gershom's passing. Even if he was a fellow Zambian, I only got to know him when I became a contributor on GV. Having been away from home and trying to connect with current affairs back home was very difficult for me, often I looked up to Gershom to see what he was doing and how he was doing it. I was forever impressed by his ability to participate fully in occurrences back home even when he was not there. I learned a few things from him about networking. Further, Gershom was very helpful in providing me a platform when I wanted to reach out to the people back home with a message about education and reaching out to the community. Throughout the years since then, we remained in touch. I am grateful for the down to earth man Gershom was and how he was not begrudging of knowledge or the need to help others when need arose. We have lost a man who knew a lot about Zambian politics and the former years. I am so glad I bought a copy of his book about Zambia being declared a Christian Nation. He shared a lot of insights in that book, some I did not agree with, but I was glad he could share and I was waiting for an opportunity to have a full discussion with him about the work. It seems I will not be doing that, but in his honor I hope to some day write a review for that work to add to his Amazon collection, because I would like young Zambians to read that work for themselves and in it find some of our history as a country. Rest in peace Gershom. So long, farewell.

It is with deep sorrow that I learned of the sudden death of our colleague Gershom Ndhlovu.

Translating his posts about Zambia in french was for me a unique experience. I often found myself smiling when translating his witty reports on politics in Zambia or the authorities’ attempts at censoring Zambia Watchdog.

The posts were full of humor while dealing with very serious topics. That's one of the reason why I was curious to know him in person. The latest Global Voices summit gave me this opportunity. I found him even more brilliant in person than online.

Rest in peace, my friend!