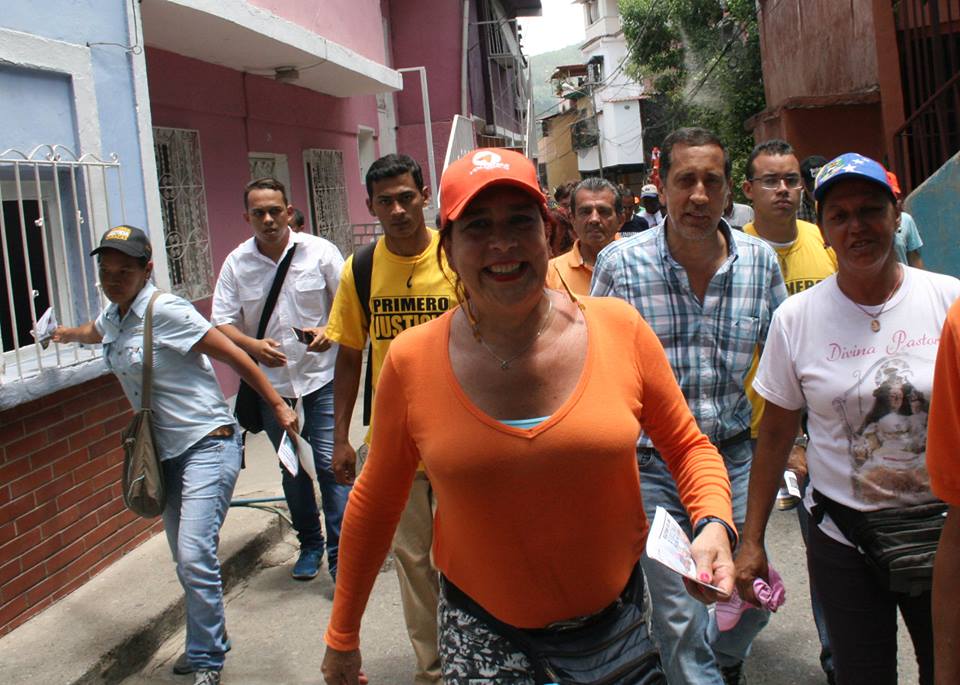 Tamara Adrián, centre, during one of her tours to promote her candidacy for the National Assembly of Venezuela. Image taken from her Facebook account.

For Tamara Adrián, seeing her name written on the ballot of the parliamentary elections on 6 December 2015 in Venezuela is a milestone — not only for being acknowledged as the first transgender candidate in the electoral history of the country, which is already an achievement, but also for the fact that, at least on this particular document, her identity corresponds with her gender.

The same cannot be said for her identity card, passport or bank cards, in which she is still Tomás Adrián. This, despite undergoing a sex change in Thailand in 2002 and having applied to the Supreme Court of Justice two years later to have her new identity recognised.

More than a decade later, she is still waiting for a response.

Hers is not the only case, nor is it the most high-profile. It is a widespread issue in the South American country's LGBT community. Marriage equality, simple name and sex changes on identity cards and legal protection for couples are just some of the matters yet to be touched on in parliamentary debate.

Under the circumstances, the rise of a transgender candidate on the local scene is surprising. She is running with opposition party Voluntad Popular in the party-line vote for the Capital District.

“I've never belonged to a party before, but Voluntad Popular has welcomed us,” she reveals to Global Voices via Skype.

Adrián speaks of a “debt” that the Venezuelan National Assembly owes the sexually diverse minority.

The absence of recognition in Venezuela is even more evident when compared to the reality of neighbouring countries. The entirety of Latin America recognises trans people's identity. With regards to Mexico, Colombia, Ecuador, Uruguay, Argentina and Chile, this recognition is possible without the need for surgery. With regards to the region, Venezuela has lagged behind. However, it was the first Latin American country to recognise trans people's identity in 1977.

Before 1998, 150 changes to identity documents were recognised, but none since then, Adrián says. “This happened under the standards of that time, after gender reassignment surgery,” she explains. Subsequently, a political change began in the country at the hand of Hugo Chávez. Some political and community associations within the government's circle attempted to include LGBT demands in the political debate, but they were disregarded by the ruling elite.

“Unfortunately, Chavism has misunderstood many modern aspects due to several traits such as militarism, evangelical overrepresentation, ignorance of human rights and the classical Marxist-Leninist-Stalinist training of some of its leaders. The above have trickled down to cause this lack of commitment to the LGBT community,” says Adrián, who trained as a lawyer in the Andrés Bello Catholic University in Venezuela and the Panthéon-Assas University in Paris.

In Adrián's opinion, the government's stance does not reflect the Venezuelan society's sentiments towards the rights of the sexually diverse community. She would also like to clarify that not all members of the LGBT community identify with the ruling PSUV (United Socialist Party of Venezuela), but their political views are spread over more than one party.

On social media, 97 percent of people's reactions towards the work I am doing with Voluntad Popular is positive. There are only a few negative responses from a few Opus Dei religious fanatics, evangelical groups or Chavistas. They see my candidacy as a threat to their propaganda, which ensures that acknowledging our rights is only possible ‘through a revolution’. This propaganda might have worked seven years ago when the region had no rights, but they've already run out of options.