From Coyotes to Vultures: What Happens When Migrants Borrow 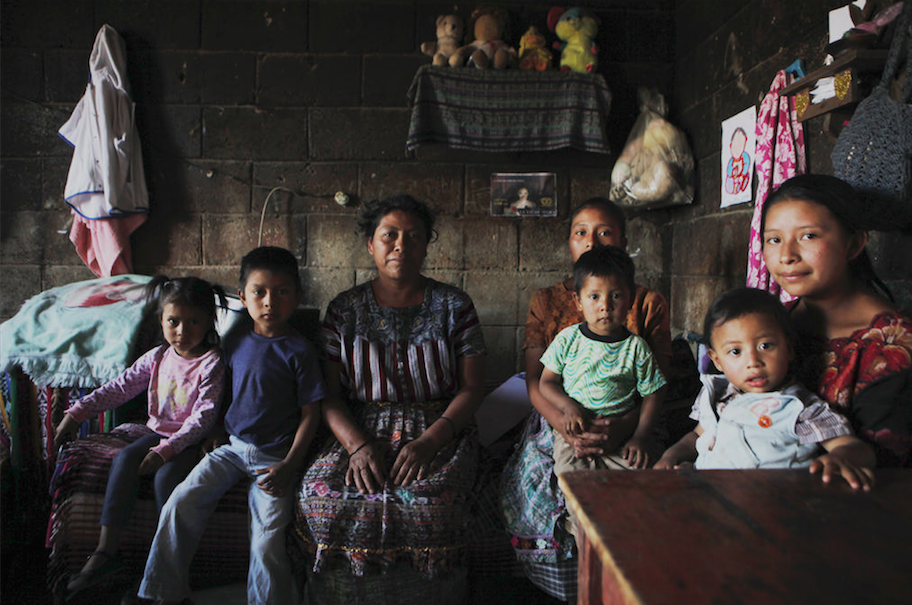 Abel Majzul's family in Guatemala, who had to cope with the cost of sending the only man of the family to the United States and the subsequent interest. Photo by Diario19.

This report is by Rodrigo Soberanes created for Diario19.com and is within the framework of the Iniciative for Investigative Journalism in the Americas by the International Center for Journalists (ICFJ) in alliance with CONNECTAS. It is published here as part of an editorial agreement.

For the Majzuls, saying goodbye to the only man of the family when he emigrated from Guatemala to the United States wasn't the only difficult thing they faced. They also had to deal with the fact that he was tied to a debt that grew every month—a time-bomb that could only be deactivated if everything went entirely according to plan.

If they hadn't chosen to take out a loan, the only other option was to go it alone: travel on freight trains from Mexico and hope not to be murdered or involved in an accident along the way.

Abel Majzul worked sending shipments for two years and paid part of his debt, but in the end he was deported and the “bomb” exploded on him and his family. Thanks to the unaffordable interest payments, they found themselves in a worse situation than they ever could have expected before taking on the adventure of the American Dream.

Abel is one of many who have travelled this way: they get into debt with a local lender to pay the “coyote”—a people trafficker—who takes them over the border. It has become common in this country; they go with debts up to their eyes, as much as $4,000-$9,000. It's a high-risk gamble in which they put not only their futures on the table, but also however much or little that they've built up in the past, as has become clear in a report published on the Platform of Latin-American Journalism, CONNECTAS.

Abel Majzul owed 40,000 Quetzals ($5,240)—a figure that grew by $524 every month due to the 10-percent interest he agreed to, when he signed a paper with no legal value whatsoever, we were told by Abel's mother, Florinda Majzul, in Patzún in the department of Chimaltenango, Guatemala.

“People have to leave their deeds here. Rather than having mortgages, they are forced to sign over the deeds of their land or house, with a verbal guarantee,” says Vinicio Solís, a businessman from Patzún.

This is what Abel Majzul's family did. His sisters and his mother Florinda talk of the worry they have lived with for years that they could lose their little two-bedroom house. According to Chimaltenango Magistrate's Court, this house now belongs to their lender, who has also reported them for “threats and aggravated usurpation.” They are now facing an order from court to vacate the property.

In this building, which has a sheet for a ceiling, doors made of recycled wood, and no cement or pictures, the family speaks the Mayan language Kaqchikel. They also only wear traditional dress and their diet consists mostly of corn and other grains—meat and dairy products being occasional luxuries.

The set of papers that Mrs. Majzul has collected in a folder shows how these agreements between the lenders and the migrants work. This is where Abel's mother keeps a notarial contract issued by a lawyer from Patzún, which states that the house was “sold” for 40,000 Quetzals to a loanshark. This debt is the shackle trapping the family, the weight hanging over them that has become more and more enormous as the years pass.

The document, signed in December 2006, states:

For the present public deed they have agreed to a purchase contract of possessive rights over the property.

The property in question is the two-bedroom house where Florinda Majzul, her two daughters, and her grandchildren live.

The story behind Mrs. Majzul's documents continues with a large number of receipts from bank deposits made between June 2007 and January 2008 to a Banco de Desarrollo Rural (Rural Development Bank) account in the name of the lender, which total 75,400 Quetzals ($9,800).

These deposits were made through shipments sent by Abel Majzul while he was working in the United States, but the loanshark doesn't recognize them as valid.

In Guatemala, 42 percent of people live in rural areas, and according to the social organization Vida Digna (Dignified Life), this is where there are ever more lenders and savings banks offering credit to poor people who wouldn't qualify for a bank loan.

According to Alejandra Gordillo, the director of Conamigua, who is in charge of defending those affected, the case of the Majzul family and their conflict with the lender is one of thousands of similar situations.

“They're lenders who appear to be rural banks. They work where the banks don't reach: they're there for a few weeks and then they disappear,” says a community organizer from the Quetzaltenango department who wanted to keep their identity hidden.

Florinda and her two daughters, like the majority of Patzún's indigenous population, are looking for work in the countryside, where men earn 40 Quetzals a day but women only earn 20. With this kind of budget, they cannot afford additional payments to lenders.

They have spent six years hoarding these depositary receipts, which are now like substitutes for the deeds that the Majzul family had to give up in their contract. Other people who don't have these papers to defend themselves with have ended up on the streets – or in prison.

“We've had people being locked up just for living in their own houses,” says the director of Conamigua.

Juan Barragán lives on the other side of Patzún. He was recently released from prison, and refused to speak about his case. “He's one of those who have been imprisoned for living in their own homes,” says the Conamigua director, who served as Barragán's legal defense. Calls to other people who have been affected are met begrudgingly or are refused.

Making these cases public will not help those affected get their homes back. “It only causes more problems,” they say. “It scares me seeing him, it makes me panic. When I see him my stomach hurts,” complains a citizen of Patzún about his lender.

No wonder they're scared. An important part of the negotiations involved in the loans is the work that the coyotes do capturing clients for the loan-sharks. “The lenders become partners with the coyotes and the drug traffickers,” the community leader assures us.

“The majority of the lenders that give this kind of service are linked to notaries and coyotes, and some are connected to organized crime,” says Alejandra Gordillo. A coyote identified only as “José,” who was interviewed in San Pedro Sula in Honduras, said, “We all have to have a specific boss and you have to work with a cartel. You can't go it alone.”

Alejandra Gordillo estimates that the Majzuls’ lender is one of “hundreds” in Guatemala, and that he has some 250 properties taken from clients that borrowed money from him. However, there is no exact register because, she says, these properties are not in his name, but under aliases.

To read the complete report, click the banner below: