Welcome to Trinidad, Where You Can Spend a White Christmas (at Least in the Airport) 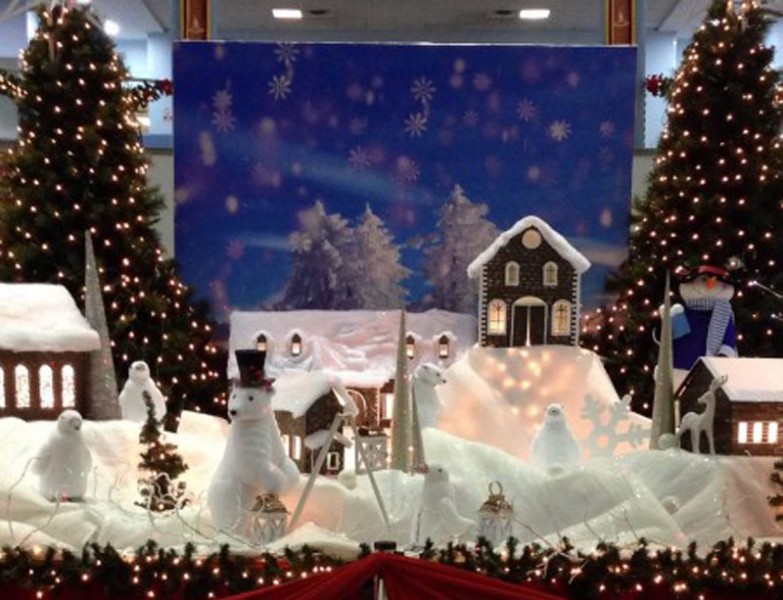 There is a brouhaha brewing on Facebook over the theme of the Christmas decorations on display in the rotunda of the Piarco International Airport in Trinidad.

Instead of warmly welcoming visitors with a tropical scene, the decor is decidedly chilly, thanks to a snowy Christmas village scene complete with polar bears and penguins. Many netizens were disappointed in the approach, saying that the theme had nothing to do with what Trinidad and Tobago should represent to the travelling public.

A slap in the face to local culture?

In a public post, Facebook user Gregory McGuire shared photos of the scene and admitted that for a moment, he wasn't quite sure where he was:

Yes, I know that there are those among us who celebrate Halloween and who climb on top of each other in the mad ‘Black Friday’ shopping specials. Yes I know the American pop culture pervades our airways […] But those are all private decisions made by individuals or by [the] private sector […] seeking to exploit the well known consumer preferences for things foreign. This is different.

How so? McGuire felt that the foreign scene was an insult to the wonders of a local Christmas:

It was more than 35 years ago that the emergence of parang soca ushered in a new consciousness of the uniquely wonderful Trinbago Christmas. […] Now to face this abomination. This is NOT private space people. […] This is our International Airport. This is the space where we only recently mounted a display in celebration of Divali. This is the space where, in three weeks time, we will be showcasing our Carnival- our mas, music and pan. To my mind, these displays are consistent with what I percieve [sic] to be the purpose of the Hall as a [sic] exhibition space. These displays have highlighted the our rich cultural heritage to visitors and locals alike.

Local Christmas landscapes typically involve vibrant decorations, sometimes made out of local materials such as fig leaves, hardy tropical plants or calabash fruit. In public spaces like shopping plazas and malls, holiday music is an eclectic blend of Christmas classics, parang (folk music with a Spanish influence) and its hybrid, soca parang, which incorporates the soul of calypso into the rhythm. And in honour of the ‘reason for the season’, there is usually a creche on display. This mix of influences is usually reflected in Trinidad and Tobago's cultural celebrations, thanks to the country's ethnic and religious diversity.

Indignant about the fact that there was likely little or no local spend on the display, his post went on to ask relevant questions, including whether “any consideration given to an alternative design with a local theme” and how much money was spent on the design and installation:

Can those in charge of the Airports Authority please provide some answers to the people of Trinidad and Tobago? Perhaps it may be simpler to kindly remove this eyesore and replace it with something that represents our Christmas. 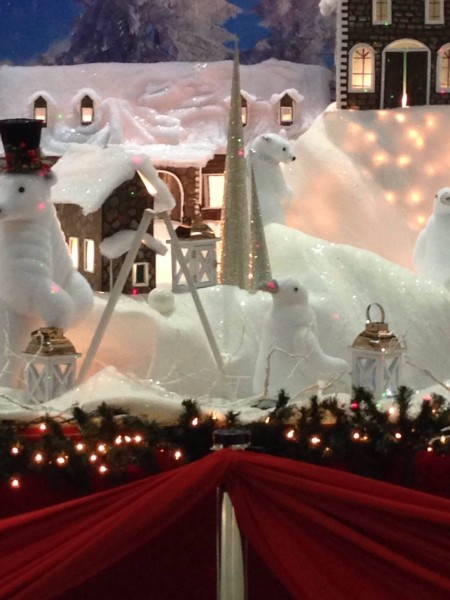 Detail of the 2015 Christmas decor at the Piarco International Airport, Trinidad. Photo by Gregory McGuire, used with permission.

Frosty the snowman, Polar Bears, Snow and Snowcapped Rooftops, Mistletoe, Holly and Reindeer!!!
This is what the Airports Authority of Trinidad & Tobago (AATT) pay for and put up as a LOCAL CHRISTMAS DISPLAY in the public foyer of PIARCO INTERNATIONAL AIRPORT !!!! […]

Is one thing if a PRIVATE COMPANY wants to pay for this kind of display…but this is Trinidad & Tobago TAXPAYERS DOLLARS that funding something that is inimical to my culture and totally foreign to my Christmas sensibilities!!!

Where are the representations of my Parang Band? Where are my Poinsettias in their Red and Green glory???? Where is my table laden with Sorrel and Ginger Beer and Pastelles and Black Cake???

Piarco? Embarrassing. Who okayed that?

We continue to throw away our unique culture!!

It's nice but does not say T And T Christmas, if I am coming to Trinidad I want to see a display of a trinbago Christmas especially if I just left snow. I just saying.

As I agree with the view that it is an international airport I do not however see the need to decorate our airport based on a western view of what Christmas is supposed to look like. People travel from their various homes around the world not to see the same things that they left behind but to experience new cultures and ideas. We should be proud to decorate our airport with our local ideas of Christmas. Maybe showing a scene of a street with houses decorated, kids playing outside, adults old talking on the porch, and a parang band moving from house to house. Not a white Christmas with freshly fallen snow and polar bears. Kudos to the decorator on a job well done but shame on you for putting someone's else's culture over your own.

A differing opinion came from Nyikluss Seales SC, who posted an image of a billboard at London's Heathrow airport of a Trinidad Carnival masquerader and explained:

Trinidadians need to understand that not everything needs to be local. I love the idea and concept. Yes I am also Trini to my heart. However not everyone has trini representation and it is nice to come home to the Caribbean and feel special knowing that they support and look at the many different ways of celebrating Christmas. It is an international airport and it is nice to see that different cultures are represented even in the sweet island of Trinidad. I have been to the airport as recent as Sunday and I saw different parts of the airport decorations represent[ing] a […] culture of local designs and expressions. So please before you speech off and express negative behavior, remember […] it is nice to give some consideration to others. Snow does not fall in Trinidad but it can be represented for others as how coconut trees with a lady sitting under it with a cold icy Carib [beer] can be represented in the Italian airport.

It comes down to a matter of personal taste and whether your perspective is local or global; netizens might just have to agree to disagree on this one.

Update: The social media outcry had such an impact that Zola Joseph, Corporate Communications Manager of The Trinidad and Tobago Airports Authority, has since announced that “the […] contracted decorator would make adjustments to the controversial side of the display. The snow and winter characters would be removed and would be replaced—at no further cost—by other ornaments which would highlight the nature of a T&T Christmas.” Some netizens, however, were not placated by the ‘improvements’, saying that the tropical display showed “no thought, no artistic sense, no cultural integrity”.