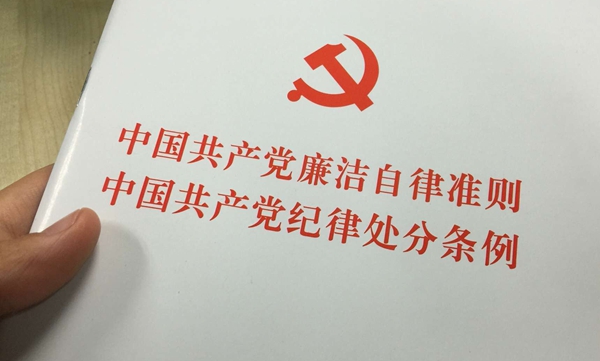 Under the pretext of improving the management of its 88 million members, the Central Committee of the Communist Party of China (CPC) announced a new set of disciplinary rules on October 22, 2015.

The most controversial rule was against the “improper discussion of central government policy” (妄議中央), which could result in members being expelled from the party. Though the rule applies only to the CPC's members, some observers have theorized that it represents an effort by central leadership to consolidate its power by purging the party of dissent.

The first party corruption case based on the “improper discussion” rule involved the sacking of Xinjiang Daily editor-in-chief Zhao Xinwei in early November. The CPC accused him of making public comments criticizing the central government's anti-terrorism and anti-extremism policy in Xinjiang, a region home to the Muslim Uyghur minority where ethnic tensions between authorities and locals have erupted in violence since 2008. Zhao was expelled from the party and could face further criminal charges of corruption.

In a separate corruption investigation carried out by the Central Commission for Discipline Inspection, a number of top officials — including Zhou Benshun, former party secretary of Hebei Province, Yu Yuanhui, former party secretary of Nanning city in Guangxi Province, among others — have also been accused of “making public comments that go against the spirit of the central committee.”

Many opinion leaders have criticized the new “improper discussion” rule as hindering the development of “intra-party democracy”, the idea that China's single-party system could incorporate internal checks and balances based on deliberation and voting. Those who support the rule, on the other hand, argued that it will not affect society as it only applies to party members in order to protect the central authority's leadership.

Yet, as the majority of employees from the public sector, including media outlets, schools and universities, are party members, the rule's impact is potentially pervasive. Liang Xinsheng, the vice department head of the English Department at Lingnan Normal University in Zhanjiang city, was also sacked under the new rule for making comments on social media platform Weibo that allegedly defame the party and the country.

A history of political persecution

The rule is ambiguous in nature; the basic question of who judges what is inappropriate remains unanswered. In fact, those who raised that very question on social media saw their comment censored. Law professor He Weifang's post below, in which he mentions famous party members who were persecuted by the party's leadership, only to later be “rehabilitated” posthumously years later in recognition of the injustice, was among the deleted posts:

Improper discussion? When the Central Committee launched the Great Leap Forward [an economic campaign in the late 1950s and early 1960s that forced rural peasants to form agricultural collectives and give up private farming, which contributed to widespread famine], [senior military leader] Peng Dehuai questioned the policy. Is that improper discussion? When Mao Zedong launched the Cultural Revolution and attacked [statesman] Liu Xiaoqi, it was central committee's policy. [Party member] Zhang Zhixin raised her voice in opposition. Is that improper discussion? Back then, the way the party punished Peng and Zhang, they were more than improperly discussing — they were anti-party or anti-revolution. But eventually, their persecution was rectified. So the question is: who defines what is improper or not? Who is the judge?

Many saw worrisome parallels between the “improper discussion” rule and the Anti-Rightist Movement (1957-59) and the Cultural Revolution (1966-1976), both campaigns that sought to purge undesirables from the communist party. As the term “improper discussion” is newly invented, blogger Sima Dang traced its origin to a historical term — “criticism in public” (指斥乘輿). Similar to He Weifang, he feared the rule would be used as justification for widespread political persecution:

After the new China was established [in 1949], to consolidate the dictatorship of the proletariat, the Anti-Rightist Movement in 1957 made extensive use of “criticism in public” — “anyone having an opinion on their working unit leaders is anti-party, and hence they are also rightist.” The rightists argued back that they were not against the Central Committee but just wanted to raise their opinions on their working unit's leaders. The answer they got was “party leadership is not abstract but concrete. Isn't the leadership of the Central Committee also embodied in the leadership of working unit's leadership?” […]

A decade later, in order to crack down on the bourgeoisie, “criticism in public” became more specific. On 13 January 1967, “Regulations on Strengthening Public Security during the Great Proletarian Cultural Revolution” were announced. They specifically stated that “any attack and defamation of great leader Mao Zedong and his comrade Lin Biao is anti-revolutionary.” After that, Zhang Zhixin and Li Jiulian, among numerous others who participated in “improper discussion” of Mao Zedong and Lin Biao, were arrested, silenced and murdered.

Where will it end?

The anxiety over a possible return of violent political struggle nationwide is reflected in the following satirical comment that went viral on Chinese social media platforms:

The satire isn't so far off the mark. Recently, a high school teacher named Zhang Aijia from Hubei province was fired for reposting a comment that mocked the online propaganda surrounding Xi Jinping's reading list. Even though Zhang did not make any comment of her own and the reposted comment did not mention Xi Jinping's name, the school was under political pressure to dismiss Zhang. All this dark humor risks turning into political reality.