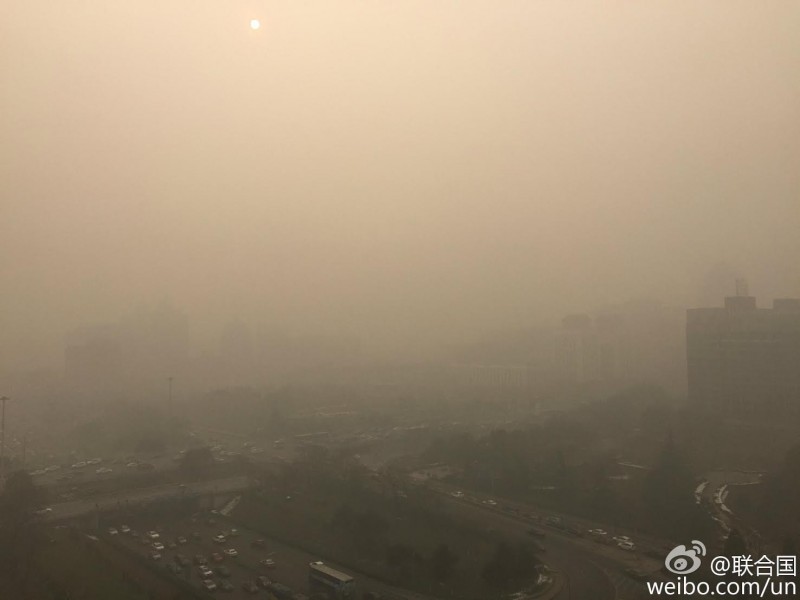 “Beijing today…Smog. The United Nations Climate Change Conference will convene today. What do you expect?” asked the United Nations account on Chinese Twitter-like Weibo on November 30, the day that the much anticipated summit on climate change kicked off in Paris.

“The conference should be held in Beijing,” responded one Chinese netizen, referring to the short-lived blue skies that the city experienced during high-profile events  — like “Military Parade Blue” and “APEC Blue” — when the government ensured the air quality by shutting down factories and limiting the number of vehicles on the roads.

But once again, Beijing is shrouded in hazardous smog. The city registered the worst record of this year on November 30, with the PM 2.5 reading in some districts reaching almost 1000 μg/㎥, 100 times above what's considered healthy by the World Health Organization. The Chinese government has launched the orange alert — the third level of four tiers — instructing citizens to limit their outdoors activities and construction work, according to the Beijing Emergency Plan for Heavy Air Pollution.

PM 2.5 is fine particulate matter; its diameter is less than 20 percent of a single hair. Due to its size, it can enter the lungs, increasing the risk of cardiovascular diseases including lung cancer, stroke, and asthma. 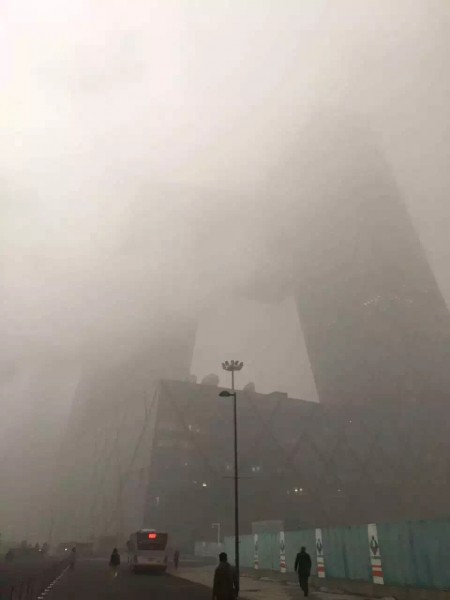 The building of Central Television in Beijing shrouded in thick smog. Photo from Weibo's user @Yaba

As the Beijing Municipal Bureau of Environmental Protection shows that in the first half of 2015, the number of days when air quality fell within healthy limits was 55, eight more days year on year, and the density of PM 2.5 dropped by 15.2 percent. Beijing Mayor Wang Anshun has promised the control of PM 2.5 will reach 70 μg/cm² by 2017, according to central government’s pollution resolve plan in 2013.

At the Paris climate talks on November 30, Chinese President Xi Jinping resolved to “reduce carbon dioxide emissions to between 60-65% per GDP compared to 2005 and increase the amount of energy coming from non-fossil fuel sources by 20% by 2030.”

‘Why was Chai Jing’s documentary censored so eagerly?’

The yellow and brown sky reminded people of an independent documentary known as “Under the Dome” released this February by Chai Jing, a well-known journalist who used to work for state-run Chinese Central Television (CCTV). One netizen remarked:

Major skyscrapers and landmarks disappear overnight. I cannot for the life of me see what color the traffic lights at the opposite end of the road are. I want to ask some officials: Why was Chai Jing’s documentary censored so eagerly? And whoever did it, why did they decide that the issue of air pollution is so irresponsible?

Chai's documentary begins by recounting the operation her baby, born with benign tumor in 2013, had to undergo. Touched by her baby’s suffering, she staged an investigation with her own money into heavy industrial plants and the government's air pollution regulations, further revealing vested interests behind Petroleum China and Sinopec — two state-run energy tycoons monopolizing the domestic market. She made several visits to western countries like the United Kingdom and the United States to explore better ways of controlling the emission of pollutants.

For the first time, a Chinese journalist brought the issue of air pollution into the realm of public discussion, despite criticism of some scientific mistakes and lack of accurate statistical data in the film.

Fearing the potential public pressure the documentary could generate, censors later pulled the documentary from domestic websites, including government mouthpiece People’s Daily, and silenced the furious online discussion ahead of the annual sessions of the National People’s Congress.

Chai’s investigation aside, it is rare to see in-depth coverage of those players who have an interest in keeping the environmental status quo in Chinese media, whose reports mostly focus on personal steps people can take to protect their health and the government’s measures on already smoggy days.

“Whether reports on haze or on other environmental issues, domestic media should bear the burden of responsibility,” a People’s Daily article pointed out last year, “to provide more scientific and deeper reports to public, and to make effort to present a good image of the country.”

Edward Wong, the Beijing bureau chief of The New York Times, suggested state-run Xinhua News Agency should make use of its status to dig deep into the reasons for the air pollution:

Xinhua should do journalism and use their 内参 to write public reports on vested interests behind the pollution. https://t.co/AnLr2OBv7h