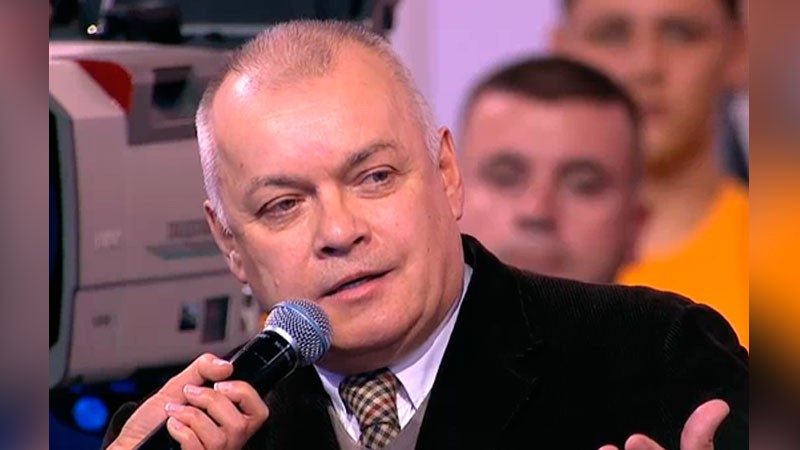 The Russian state media has joined the worldwide debate about what to call the Al Qaeda offshoot that has come to control large parts of Iraq and Syria. This militant organization is known to most English-language readers as ISIS (the “Islamic State of Iraq and Syria”) or simply “the Islamic State.” In Russia, the group is typically called ИГИЛ (the Russian form of ISIL, or “Islamic State of Iraq and the Levant”) or just ИГ (“IG,” which in Russian stands for “Islamic State”). Like the French news media, much of the Arab world’s journalists, and reporters in several other countries, Russia is now shifting to a new name for the group, adopting the Arabic acronym for ISIS, “Daesh,” which the group itself rejects as insulting.

What brought about the Russian media’s sudden policy change? Those who prefer the word “Daesh” over “ISIS” and “ISIL” have Dmitry Kiselyov, Russia’s so-called “propagandist-in-chief,” to thank for the shift. Kiselyov, who heads the government-owned international news agency Rossiya Segodnya, introduced the new terminology on Sunday, November 29, during his weekly news program, which airs on national television. The next morning, he told the newspaper Komsomolskaya Pravda that Rossiya Segodnya will gradually replace the word “ISIL” with “Daesh” in reports about the organization.

Kiselyov listed several reasons for the change. Journalists around the world, including Western outlets, he explained, are switching to the term “Daesh.” He also pointed out that the French government uses the word Daesh (though he didn’t mention that France has used this terminology for more than a year now). Finally, Kiselyov cited a request from Russian Grand Mufti Rawil Gaynetdin, who recently asked a joint session of the Russian parliament to adopt “Daesh” in place of “ISIL.” (Indeed, Russia’s Council of Muftis has been asking as much for the past eight months.) Russia’s Muslim leaders say the linguistic change would remove a term that inadvertently reinforces the idea that Islam is inherently violent.

But why is Kiselyov responding to these developments only now?

Since the November 13 attacks in Paris, Russia has intensified efforts to present itself as France’s steadfast ally in Syria. So far, it seems to be working. On November 26, French President Francois Hollande even visited Moscow, where he and Vladimir Putin discussed the possibility of broadening the coalition against militant groups in Syria.

On his television show, Kiselyov also used the Daesh/IGIL split among Western countries to take a jab at Turkey (with whom tensions have been high, following a border incident in Syria), saying NATO members’ approaches to the Syrian conflict are worryingly “heterogeneous.” In the show, he then pivoted to a story about Ankara buying oil from ISIS, arguing that Turkey thereby sustains terrorism in Syria. A day later in Paris, incidentally, Vladimir Putin stated publicly that Turkey only shot down a Russian jet a week earlier to protect its oil trade with terrorists.

One of the first people to notice that Kiselyov’s Sunday-night broadcast signaled an industry-wide shift for Russia’s news was Alexey Kovalev, who runs the counter-propaganda website Noodleremover.news. Writing on Facebook on November 29, he reported that top figures in Rossiya Segodnya’s news empire had begun circulating a memo announcing a shift from “ISIL” to “Daesh.” Kiselyov’s decision was already filtering down, throughout Russia’s state-run media. On November 30, RIA Novosti’s David Burghardt confirmed on Kovalev’s Facebook page that he’d received a memo dictating a change of terminology regarding ISIS that applies to all state-owned media outlets.

Judging by its most recent articles, RIA Novosti (which Rossiya Segodnya controls) has already dedicated itself to the gradual transition, using the term “Daesh” with an explanatory note. TASS, another state-run newswire service, also seems to be changing its terminology. While many independent outlets, like Lenta.ru, RBC, Slon, Dozhd, and Kommersant, have not showed signs of switching to “Daesh,” the pro-Kremlin publications LifeNews and Izvestia say they have been searching for a way to distance the so-called “Islamic State” from Islam for three months already. According to LifeNews Executive Director Anatoly Suleimanov, the outlet’s publisher, Aram Gabrelyanov, finally made the decision to adopt the term “Daesh,” informing his staff of the change on November 30, a day after Kiselyov’s broadcast.

The debate about what to call the organization that’s seized control of eastern Syria and western Iraq is undoubtedly important. It should come as no surprise that we at Global Voices have also discussed the matter. In fact, in a Community Blog post by GV Managing Editor Sahar Habib Ghazi on July 20, we aired our internal conversation about this rhetorical riddle.

The switch by the Kremlin’s media outlets to “Daesh” promises at least two features unique to Russia. First, it could be a loophole that allows journalists to avoid the tiresome requirement set down by federal censors, which mandates that journalists mention—in every article about the group—that the “Islamic State” is “banned in Russia as an extremist organization.” (Kiselyov himself endorses this advantage.) Second, and more importantly, the speed and order in which different publications change their ISIS terminology could inadvertently reveal Kiselyov’s grip on Russia’s media, power over much of which Vladimir Putin placed in his hands two years ago this month.