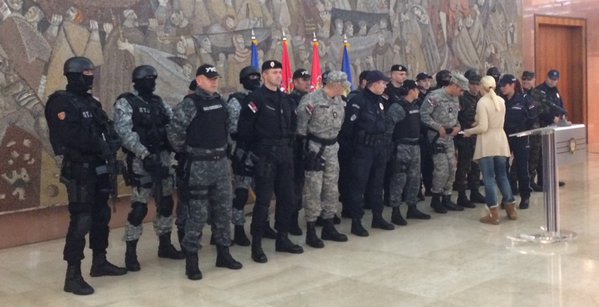 Following accusations by Serbian daily Kurir that the country's prime minister was involved in threatening the newspaper's former director, Serbian Interior Minister Nebojša Stefanović announced during a press conference that the prime minister had “passed” all questions in a voluntary polygraph test on the matter.

Stefanović, speaking on Sunday, November 29, with two rows of armed police officers standing behind him, added that “lies being spread about the PM must stop.”

All this press conference is missing is an armored vehicle.

The unexpected press conference was held in response to a video released by Kurir that Sunday morning. In the footage, the paper's ex-director Aleksandar Kornic stated that Prime Minister Aleksandar Vučić, his brother Andrija Vučić, and the director and editor-in-chief of government mouthpiece Informer met with him in a Belgrade restaurant and pressured him for days to give false testimony regarding the activities of Aleksandar Rodić, owner of Adria Media, which owns several national publications including Kurir.

Kornic said he sought the help of his former colleagues at the daily, claiming he feared for his safety and had been “going through hell” over the past 15 to 20 days. In the 15-minute video released online, Kornic describes the event.

That afternoon, Serbian Interior Minister Stefanović called a press conference to inform the public regarding the investigation into this matter. Before the event, reporters present began tweeting photos of the two rows of fully equipped officers from several different police units lining up behind where the minister was expected to speak, sparking worried speculation over what the government's message was. Journalist Suzana Trninić was among the first to share the image that spent the day circulating social networks:

And what were you? We were the backdrop. pic.twitter.com/LkQXdCtkbD

During the press conference, which was broadcast live by several television channels and uploaded to YouTube later on the official account of the ruling Serbian Progressive Party, Stefanović stated that the prime minister was cooperating fully with the police investigation into the allegations of Kornic and Kurir daily. He then explained that the prime minister came to speak to police before being summoned and volunteered to take a polygraph test. Stefanović said Vučić passed with flying colors, “answering all questions with ‘no'” in reference to his knowledge of the events described by Kornic and whether the prime minister had ever met Kornic at all.

Stefanović called the accusations an “obvious” attempt at discrediting the prime minister and “destabilizing Serbia.” He said the public prosecutor would be launching an investigation that day into who was “organizing and spreading lies” and that two men had been arrested, at least one of whom was caught “passing by the prime minister's home eight times” in one day, although he did not specifically explain how the two matters were related. The prime minister and his family as well as some other members of the government had added security assigned to them, Stefanović said, hinting that their safety might be in jeopardy.

“What is good in all this is that we have seen that the prime minister demonstrated today that he is a common citizen of Serbia and one of us,” Stefanović added, saying, “He showed he is a normal man, for whom the truth and justice are above any function.”

‘This is a public threat to EVERYONE’

When he finished his statement, Stefanović turned to the press and asked for questions. After 10 seconds of silence, Stefanović wrapped up the press conference, stating, “Well, if you don't have any questions,” and left.

Other journalists and the general public soon chimed in with comments.

Internationally acclaimed Serbian journalist Brankica Stanković, who is the host of the only investigative journalism television show in Serbia and who has a security detail assigned to her by the government because she began receiving threats several years ago, commented almost immediately:

When the minister of police speaks at a press conference backed by a BUNCH OF ARMED police officers then this is a public threat to EVERYONE not just criminals!!!

Stankovic later tweeted that she had requested her security detail, assigned by the Ministry of Interior, be removed and would accept responsibility for her personal safety. The request was denied by authorities, Stankovic said, offering no further explanation.

Other users noted that former regional leaders who had been known for tight security and strong-arming the public hadn't flaunted their police forces like this:

After the assassination of Đinđić [former Prime Minister of Serbia, assassinated in 2003] and the rebellion of the Special Operations Unit [disbanded special unit of the former regime] there were no police forces lined up at press conferences. Now they've lined them up to say that Vučić passed a polygraph.

President of the Independent Journalists’ Association of Serbia (IJAS) Vukašin Obradović made a statement saying he was deeply concerned for the safety of journalists in the country and that the press conference and statements made by Minister Stefanović could only be construed as a “call for lynching journalists” in Serbia. In that statement, IJAS expressed particular concern for “labeling certain journalists and media as participants or organizers in a possible state coup”:

“This is a way of openly calling for persecution and lynching of individual journalists and directly puts their safety at risk,” the IJAS statement, signed by its president Vukašin Obradović, says.

“IJAS is calling on the responsible state bodies to investigate the accuracy of the claims published by the daily Kurir and, after the conducted investigation, inform the public [of their findings].”

IJAS holds that it is very dangerous to conduct investigations and bring judgement in the media instead of institutions of the system.