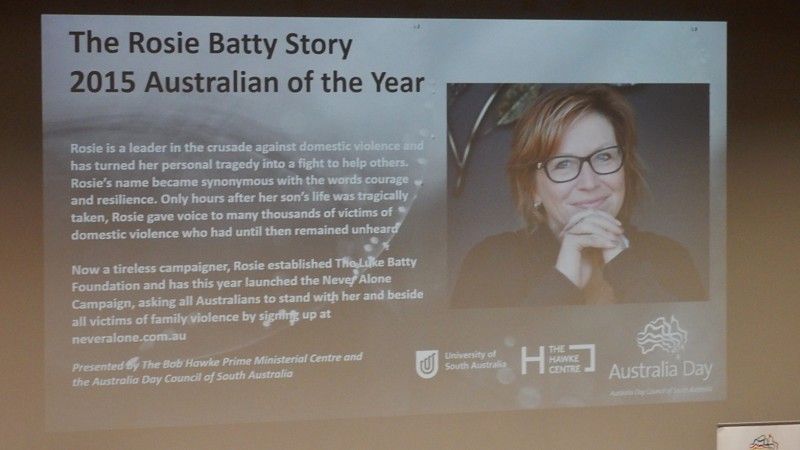 #WhiteRibbonDay, which observes the International Day of the Elimination of Violence against Women, took on a strong sense of urgency in Australia on 25 November 2015.

Richard O'Brien in his post Men's Business for the Australian Independent Media Network shared some of the alarming statistics:

Rosie Batty, Australian of the Year, has been a key figure in stimulating this focus on domestic violence. She has campaigned relentlessly since the murder of her 11-year-old son Luke by his father in February 2014. She set up the Luke Batty Foundation with the goal “to raise funds to support women and children affected by the trauma of family violence.”

I want to tell everybody that family violence happens to everybody. No matter how nice your house is, how intelligent you are. It happens to anyone and everyone.

One of the organisations working actively to bring about change is Fair Agenda. It has pushed for ‘full funding of family violence services’. Fair Agenda won social network Care2‘s Impact Award 2015 for its ‘What it will take’ campaign:

Fair Agenda’s ‘What it will take’ campaign mobilised people around the fact that thousands of women fleeing family violence are being turned away from frontline family violence services because those services don’t have enough funding.

New media have been very successful in rousing old media on the issue. Fair Agenda was highlighted on national television in Waleed Aly's segment ‘Show Me The Money’ on Channel 10's The Project, a nightly current affairs program. The May 2015 video of that piece has had over 700,000 views and 1,000 comments on The Project's Facebook page. The Twitter response was also substantial:

Over 400 ppl turned away from homelessness services every day, many are escaping violence @theprojecttv http://t.co/BvW9jPrKD5

Fair Agenda was a popular winner with participants at the #FWD2015 Digital Campaigners conference when it was announced:

ABC TV (Australian Broadcasting Corporation) has shown a two-part special, Hitting Home, to coincide with White Ribbon Day. Journalist Sarah Ferguson (@FergusonNews) has been immersed in the justice and health systems, embedded in a women's refuge, and tackling male perpetrators in prison. The #HittingHome hashtag has seen heavy traffic:

So has #QandA, a debate program, during the special panel that followed episode 2:

These tweets touched on the unity of purpose that has emerged recently around the need to tackle the domestic violence emergency:

Side note: how refreshing is it to have politicians speaking passionately and not bickering on #qanda? #Hittinghome

Police are now great allies battling DV and this is great example of deep cultural change. There is hope! #QandA #HittingHome

Many hope that a consensus will emerge about providing domestic violence leave in workplaces:

Meanwhile, the Victorian State government's Royal Commission into Family Violence has finished its hearings and should report its recommendations for action early in 2016. The publicity generated by Rosie Batty was one of the key motivations behind the setting up of this inquiry. She has had the rare privilege of addressing both houses of the Victorian parliament:

Getting ready to address both houses of @VicParliament You can watch here at 10.30am https://t.co/FNgjGbXkwZ

Her address certainly had a impact on parliamentarian Frank McGuire:

Rosie Batty likens family violence to terrorism. We need honest look at attitudes and culture. As individuals we must change our attitudes.

Finally, Emeline Gaske had a practical reminder for our lawmakers and governments: