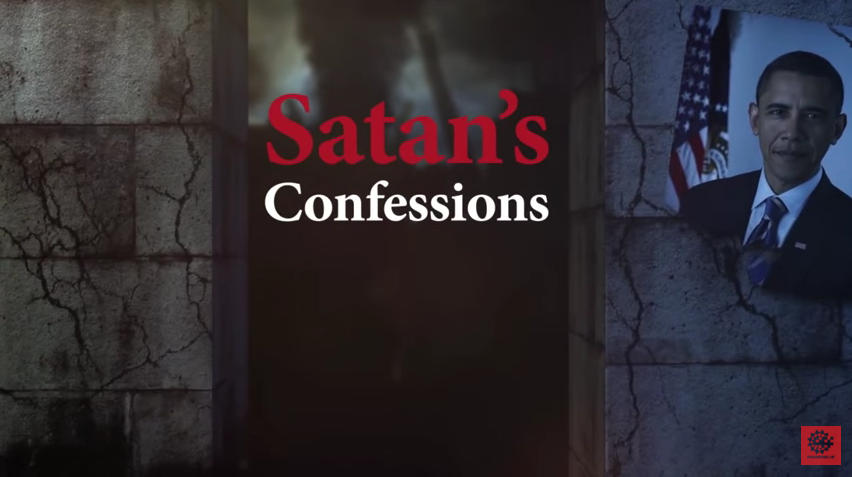 The current state of affairs in the world is troubling. From recent attacks in France, Lebanon, Mali, Nigeria and Tunisia, to military lockdowns in Brussels and ongoing wars in Iraq, Syria and Yemen, the lists of armed conflicts are long and ever growing. In the midst of all this, Iran's Supreme Leader Ayatollah Khamenei has taken an opportune moment to voice his opinions on these global issues in a series of consecutive tweets, presented as snippets from his daily talks and meetings.

Throughout these messages, he points to what he identifies as the destructive and hypocritical policies of the United States and its allies, while offering no self-reflection on the Iranian government's own policies. It should be mentioned that Iran has an elected president, but the unelected and divine figure of the supreme leader wields ultimate decision-making power in Iran.

The video featured below, posted on his Twitter account on November 1, 2015, also summarizes Khamenei's feelings toward the US and the infamous narrative of the US as “the great Satan,” despite the joint nuclear agreement made in July between Iran, the US and the P5+1 countries. The video associates any local protests or opposition movements in Iran with American influence or infiltration.

Khamenei maintains an English-language Twitter account known as @khamenei_ir, often complimented with Arabic- and Spanish-language translations on @khamenei_ar and @khamenei_es, respectively. Although Twitter is blocked in Iran and the account remains unverified by Twitter, the exclusive photos and information that it publishes points to Khamenei's office running the account for him. Meanwhile, the ayatollah's Farsi-language Twitter account, @farsi.khamenei.ir, has remained inactive since May 2015, indicating that his office is using the platform as a tool of international public diplomacy to propagate his views outside of Iran.

The following looks at Khamenei's tweets from the past three days.

‘Mr. Putin is an outstanding figure in today world’

Starting on Tuesday, November 23, 2015, Khamenei participated in a series of state visits, which resulted in several tweets highlighting the discussions between him and the visiting heads of state. The main theme that arose was the negative interventions of the US in regional conflicts.

In conversation with Nigerian President Muhammadu Buhari, Khamenei seems to conclude that the problems posed by Daesh (or ISIS, as the militant group that has come to control swathes of Iraq and Syria is also known) and Boko Haram to Nigeria, Iran and the wider region are exacerbated by the US and “the west”:

Investing hope in cooperation and aids from US & west in fight against terrorist movements like #DAESH or #BokoHaram is erroneous.

While most visits resulted in two or three tweets, the visit of Russian President Vladimir Putin with the ayatollah took up 16 tweets and included a photo album of the event featured on his website farsi.khamenei.ir. The tweets mainly included praise for Putin, criticism of the United States and mention of their joint cooperation on Syria and commitment to maintaining Bashar Al-Assad's sovereignty as Syria's “democratically elected president.”

Leader in meeting with Russian president: America always try to put rivals in status of passiveness but you neutralized this policy.

Moscow’s decisions and measures on #Syria lead to improvement of regional and global position of Russia and of Mr. Putin himself. — Khamenei.ir (@khamenei_ir) November 23, 2015

Any solution for #Syria must be known and agreed upon by Syrian people and authorities. — Khamenei.ir (@khamenei_ir) November 23, 2015

Putin in Monday meeting with Leader of Revolution: Iran is a trustworthy and reliable ally, no one can decide instead of Syrian people. — Khamenei.ir (@khamenei_ir) November 23, 2015

In the midst of the war raging in Syria, Assad was reelected as president in 2014, winning nearly 90% of the votes. Voting was only held in areas of the country controlled by his forces; the European Union and the US condemned the election as a sham.

Russia and Iran have been strong supporters and allies of Assad since the beginning of the civil war in 2011, providing military aid, weaponry, training and advisers. As of September 2015, the Russian military has been deployed in Syria to fight militant groups such as Daesh at the request of Assad, however, it is known that these strikes have included rebel groups and populations opposed to Assad.

The US offered support for the moderate rebels of the Free Syrian Army against the Assad government during the onset of the civil war in 2011. As of September 2015, the US alongside a coalition including Saudi Arabia, UAE, Jordan, Qatar and Bahrain began airstrikes against Daesh strongholds.

Support for anyone ‘who confronts and resists against oppression’

In a meeting with Iraqi President Fuad Masum, Khamenei reflected on the sectarian tensions in the country that he blamed on American influence and alluded to the much criticized invasion of Iraq in 2003.

The Iraqis have lived together with no problems for centuries, but some regional countries & aliens exaggerate discords; it must be opposed. — Khamenei.ir (@khamenei_ir) November 24, 2015

Situation in #Iraq must not provide grounds for US to dare speak of disintegration of this country. 2/2 — Khamenei.ir (@khamenei_ir) November 24, 2015

In meeting with #Iraq president: Americans must not be allowed to see Iraq their own asset & behave or speak about it in any way they like. — Khamenei.ir (@khamenei_ir) November 24, 2015

Amongst this week's last state visits was one from Bolivian President Evo Morales. Again, the theme was standing up against American policy, especially in their efforts to influence and “ruin” local cultures and politics in Latin America and the Middle East. During this discussion, Khamenei highlighted Iran's support of the oppressed anywhere in the world.

In meeting with Bolivian president: it is necessary to strengthen wills to confront US policy of changing identity of nations. — Khamenei.ir (@khamenei_ir) November 24, 2015

The Islamic Republic of #Iran supports anyone, anywhere in the world who confronts and resists against oppression and dominance. — Khamenei.ir (@khamenei_ir) November 24, 2015

In a speech to Iran's paramilitary organization the Basij, the Ayatollah broke down his thoughts on a number of ongoing conflicts in the Middle East, including the brutally repressed protest movement in Bahrain, the civil war in Yemen, the Palestinian movement against Israeli occupation, and the direct and indirect supporters of militant organisations such as Daesh.

Again, he spoke of all this as an indictment of the US, both in its legacy in Iraq and the wider region in aiding the rise of Daesh, as well as its support of allies such as Bahrain, Saudi Arabia (which is leading a coalition intervening in Yemen on behalf of President Abd Rabbuh Mansur Hadi's contested government) and Israel.

Thousands of Basij commanders from across the country met with Leader of the Islamic Revolution. pic.twitter.com/Ne7MtMeu7p — Khamenei.ir (@khamenei_ir) November 25, 2015

On #Bahrain: What is wrong with demands of Bahrain people? They demand suffrage for all. Don’t you claim democracy? Anything more clear?! — Khamenei.ir (@khamenei_ir) November 25, 2015

Innocent Yemeni people are being bombarded for months now, yet human rights organizations still support aggressors! This is #Arrogance.

Palestinian #Intifada has begun in #WestBank, over 60 years after occupation, generations have changed, but Palestinian cause still exists. — Khamenei.ir (@khamenei_ir) November 25, 2015

Arrogance is directly and indirectly supporting most devilish terrorists in #Syria. pic.twitter.com/CYpQHXMK3J