Ahmadi Muslims Once Again Become a Target for Violence in Pakistan 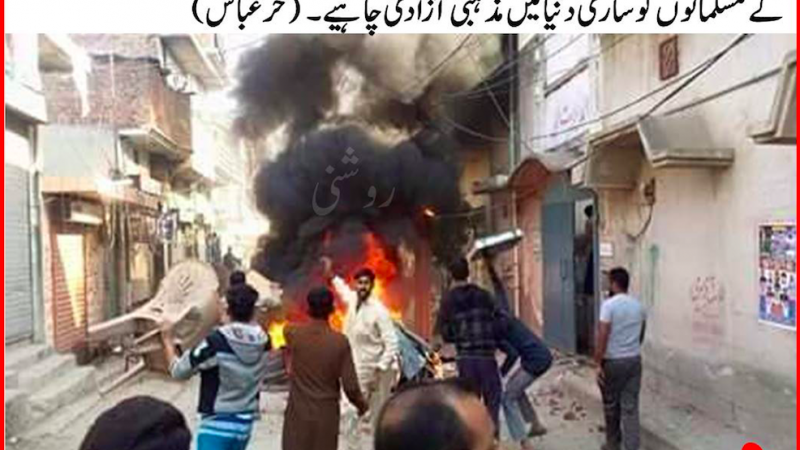 This image, shared by alternative debate platform Roshni, says: “The Jhelum incident proved that the minority communities are not safe in Pakistan, but Pakistani Muslims want religious freedom around the world. (Hur Abbas)”

A contingent of the Pakistan army was called in to quell riots in northern Punjab's Jhelum city after angry mobs torched a factory owned by a member of Islamic sect Ahmadiyah, broke through a police cordon at an Ahmadi mosque and ransacked it as well as burned homes owned by Ahmadis.

According to the Pakistani newspaper Dawn, the mob was incited at a local mosque that accused a factory worker of  ‘desecrating the Quran’, a common accusation used to target minorities and abuse Pakistan's unforgiving blasphemous laws. Ahmadis are a persecuted minority group in Pakistan and victim of frequent hate campaigns and blasphemy accusations. Local reports say 18 Ahmadi families had fled their homes for protection.

Police have arrested up to 35 people in connection with the incitement and violence and are hunting for another 70. The police also arrested three Ahmadis accused of blasphemy.

This is not the first time violence has been directed at Ahmadi Muslims. A year ago, 60 miles from Jhelum, in Gujranwala a similar mob sparked at a mosque by an alleged “blasphemous Facebook post by an Ahmadi man” set fire to five houses belonging to the Ahmadi community. Three Ahmadis were killed including an eight-month-old baby and a seven-year-old girl.

Another eight Ahmadis were murdered for their beliefs in 2014. More than 80 Ahmadis where killed in 2010, when militants stormed two Ahmadi mosques in Lahore and killed indiscriminately. Hundreds of Ahmadis were killed in the 1953 Lahore riots and then in the brutal 1974 anti-Ahmadiyya riots. After the 1974 riots, the country's first elected parliament and Prime Minister Zulfiqar Ali Bhutto officially declared Ahmadis non-Muslims, making Pakistan the first state to do so.

Ahmadiyya is an Islamic sect founded in 1889 in India by Mirza Ghulam Ahmad. With 5 million Ahmadis in Pakistan, persecution of Ahmadis has been particularly severe and systematic in Pakistan. Anti-Ahmadi sentiment runs high in Pakistan and is fostered by various religious groups, many of which publish and distribute anti-Ahmadi brochures at mosques. Pakistan's free media has also incited anger against the community a few times.

According to the constitution's second amendment, Ahmadis aren't allowed to call themselves Muslim or call their place of worship a mosque, use any Islamic symbols such as name of Allah, read the Quran, the holy book of Muslims, or perform the annual pilgrim of Hajj. Newspapers and media organisations use the word “place of worship” rather than a “mosque” while reporting about Ahmadi mosque because it is a punishable act under the law.

‘Staunch silence towards the heinous actions’

An Express Tribune editorial shed light on the lives of Ahmadis in comparison to another religious minority in Pakistan — Christians:

There is no member of any religious minority in Pakistan that can sleep safe in their beds. The virulent intolerance displayed against minorities has left two groups particularly vulnerable to attack and discrimination — Christians and the Ahmadis. The latter have the added disadvantage of discriminatory practices being institutionalised constitutionally. Their places of worship are attacked, the buses they commute to work on boarded by terrorists who go on to commit mass murder, and their homes and businesses destroyed.

Many Pakistani Ahmadis have taken refuge in the UK, Germany, Canada and the United States. But even in leaving the country behind they are faced with intolerance — when an Ahmedi Muslim applies for a passport or an identity card in Pakistan, they are asked to sign an oath that calls their spiritual leader an ‘imposter’ and refer to Ahmadis as Qadianis, which is a derogatory term.

Pakistani newspaper The Daily Times published a letter to the editor by US-based Shumaila Ahmed on November 23 following the torching of the factory. In it, she questioned the silence of Pakistani Muslims over attacks on minorities, referencing the recent murder of three young Muslim people in Chapel Hill in the US state of North Carolina for comparison:

In the case of the Chapel Hill tragedy as well as other Islamophobia-motivated attacks, Pakistani Muslims have been very verbal in voicing their outrage and indignation at the senseless actions towards the Muslim community. So why are these same Muslims silent in the case of Ahmedi persecution? The difference, quite simply, lies in the law of the land: the Constitution of Pakistan declares Ahmedis as non-Muslims. This allows the vast majority of Muslims to escape the moral responsibility that prompts them into solidarity in the aftermath of tragedies like Chapel Hill or the Syrian refugee crisis. With their staunch silence towards the heinous actions committed against their countrymen, Pakistani Muslims continue to fan the smoke of hatred and bigotry.

‘Lets focus on what's happening in our back yard!’

Reports of the factory being burned first broke on Twitter. One social media user, Luqman, tweeted photos reportedly of the scene:

The events were also reported on Roshni, a Facebook page that promotes alternative opinion and debate in Pakistan, which has been blocked in the past. 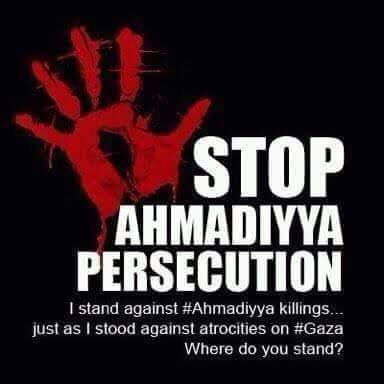 The violence reminded Tahir Imran Mian, a BBC journalist, of the 2014 Gujranwala attacks:

This is repeat of Gujranwalla situation all over again. Hope this time we don't loose precious human lives. 😔 https://t.co/Q4i5xzv1ko

Rabia Mehmood, a journalist who has done in-depth reporting on the persecution of Ahmadis, questioned the authority of the government, which established the National Action Plan (NAP) in January 2015 to crack down on “terrorism”:

While the news was all over social media as the factory burned, some users complained that mainstream media was slow to pick up the story or absent altogether. Farah Naz Ispahani tweeted:

#Ahmadi owned factory under attack in #Jhelum. Why is the media silent? #Pakistan https://t.co/uNtUAcWL5c

Kala Kawa, a blogger, argued there are double standards at play in Pakistani society:

We bleat about the West callously turning back refugees while we sit in abject silence at continued Ahmadi persecution in Pakistan.

Lets focus on what's happening in our back yard! #AhmadiyyaPersecution pic.twitter.com/hCHO3AhS5l

A video was circulating on social media showing a local Sunni religious leader addressing the crowd outside the Ahmedi mosque in Jhelum on November 22. While standing alongside army personals and local deputy commissioner officer, he promises the crowd that the authorities will punish those accused of blasphemy and tells everyone gathered that they have done a “great” deed as a good Muslim and a follower of the Prophet Muhammad by attacking the factory and the mosque. He requests the crowd to be peaceful now and not destroy any public property. In the end, he subtly warns the deputy commissioner officer to continue his cooperation or he would call people on the streets again.