Chinese Netizens Have Their Own Version of Thanksgiving: Fried Rice With Egg Day 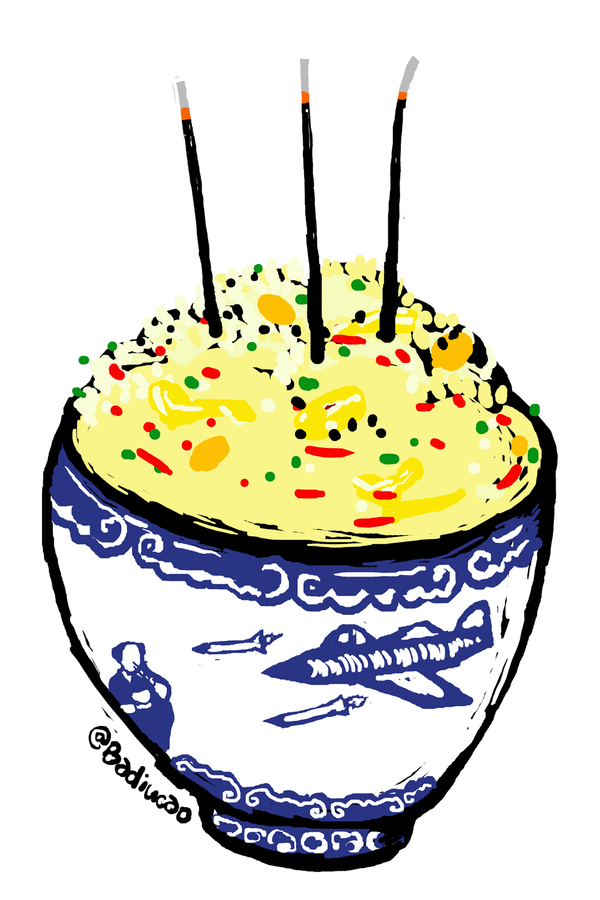 Very few people know that just like the United States and Canada, China also has a Thanksgiving Day — albeit an informal one. Indeed, netizens invented the holiday a few years back as political satire commenting on the death of Mao Anying, former Chinese leader Mao Zedong's eldest son, during the Korean War (1950-1953).

Fried rice with egg is the traditional meal. Why? Because Mao Anying was killed by an air strike during the Korean War when he was reheating the rice for a late breakfast, according to historical literature on Mao Anying and the Korean War written by former People's Liberation Army solider Wu Lijin. It is believed that the smoke from the fried rice alongside burned apple peel caught the enemy air force's attention and led to the bombing.

For those who celebrate the Chinese Thanksgiving on November 25, they believe that had Mao Anying survived the war, China would have become like North Korea. Hence, they use the occasion to express their thanks to the “enemy” air force.

This year, many Chinese netizens moved to Twitter — which is technically unavailable in China, but uncensored if you can circumvent the official block on the service — to celebrate the Chinese Thanksgiving Day. Participants published messages for the day and photos of fried rice under the hashtags #蛋炒饭节 (Rice With Egg Day) or #中国感恩节 (Chinese Thanksgiving).

Friendly reminder: Today is Rice With Egg Day. The standard delicacy is fried rice with egg and ham, apple as a side dish. Enjoy your meal and remember to upload the photo. Chinese people please retweet this. #ChineseThanksgiving

Today is Rice With Egg Day. Thank heavens that we didn't turn into North Korea. Today is also my birthday. For seven years, I have this [fried rice] for lunch. 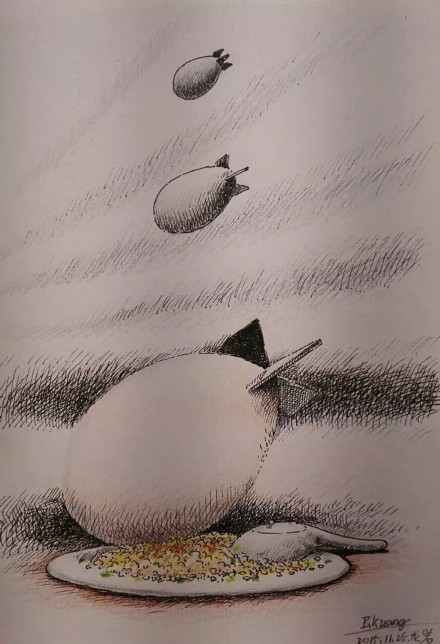 Over on China's Twitter-like Weibo, a number of netizens posted cartoonist Bill Kwong's festival artwork — although the posts were deleted quickly, given that the platform is heavily censored.

Below is a selection of posts on Weibo:

Sixty-five years ago, a plate of fried rice with egg changed the fate of China. We would have become North Korea without this dish (although the two are becoming alike). Thanks to the US Imperialist Air Force, thanks to fried rice with egg.

Just finished cooking fried rice with egg. My father came along and I had to share the dish with him. He was very happy. I wanted to tell him why I cooked fried rice today, but considering that he worships Mao as much like today's young people's worship [pop-singer] Jay Chou, I stopped myself from telling the story.

Today is Chinese Thanksgiving day. It is also called Rice With Egg Day, or Thanks-Bombing Day. Thanks to the courageous air force of the USA. You have changed the fate of a country.

But not everyone enjoys the dark humor of the day. Dissident writer @mozhixu commented:

The Chinese Communist Party's market reform and entrance into the global economy has improved people's livelihood and solved the poverty problem. People to a certain extent enjoy [freedom in] cultural and economic activities. This is the psychology behind the celebration of Rice With Egg Day. However, you have the right to eat, but no civil right. Pigs are pigs, even they are grateful [for their status]. The current marketization will likely help the dictatorship to survive longer. There is nothing for us to celebrate.

For people living outside China, at least, the hashtag was amusing:

@crehage really? Is that true? but not really matter, now I have an appetite for #蛋炒饭 🍚🍚🍚🍚🍚