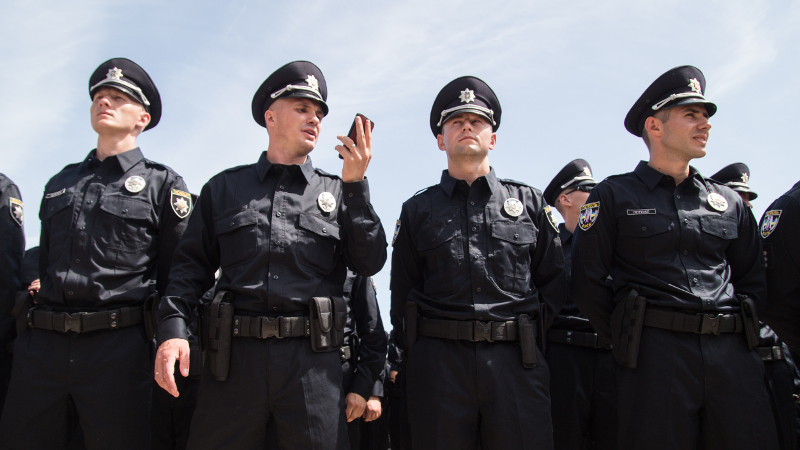 No more VK or Odnokklassniki for Ukraine's patrol police, pictured here on their first day of work in Kyiv in July 2015. Photo by Oleksandr Ratushniak for Demotix.

Members of Ukraine's new patrol police force make frequent appearances on social media—in fact, their penchant for posing for selfies and featuring in testimonials on social media pages seems to be part of their strategy to get Ukrainians to trust the reformed police ranks.

But now Ukraine's Interior Ministry has decided to ban its police officers from using Russian social networks. This means that VKontakte and Odnoklassniki, the two Russian platforms most popular in Ukraine, will be off limits for Ukrainian law enforcement.

Interior Ministry's spokesperson Artyom Shevchenko told LIGA.net news agency that the restrictions on social media use only apply to VKontakte and Odnoklassniki, but will not not affect Facebook or Twitter accounts. Shevchenko also noted, however, that police officers would be banned from “discussing information connected to their professional activities” on their profile pages.

The decision to regulate police social media practices is likely connected to a series of recent discoveries of older social media posts by Ukrainian Internet users currently serving in the new parol police that were deemed to be “unethical” by some commentators. The most prominent case is that of Kyiv police officer Alexey Savkin, whose posts on Twitter and VKontakte from the period of Euromaidan protests called for “disbanding the Maidan bums” and contained other critical comments about the protesters and the political opposition at the time.

After users discovered the posts and exposed them, Savkin deleted the entries and closed his accounts to the public, but screenshots of the posts made their way to the Interior Ministry. The patrol police department suspended Savkin while his behavior was being investigated, and later said they found his social media posts to contain “violations of disciplinary, ethical, and moral norms,” according to a Facebook post by Interior Ministry spokesperson Shevchenko.

Ukrainian social media users engaged in heated discussions about Savkin's posts (published before he served in the police) and repercussions for his actions. Several pointed out that Savkin was not the only police officer posting and sharing questionable content on social media, and even compiled archives of what they claimed were “posts indicating pro-separatist sentiment” among Odessa patrol police officers. After these became public, Odessa regional governor Mikheil Saakashvili demanded the police officers be suspended from their jobs for “publishing anti-Ukrainian content.”