If You Want to Know What #1in5Muslims Thinks, Don't Ask UK Newspaper The Sun 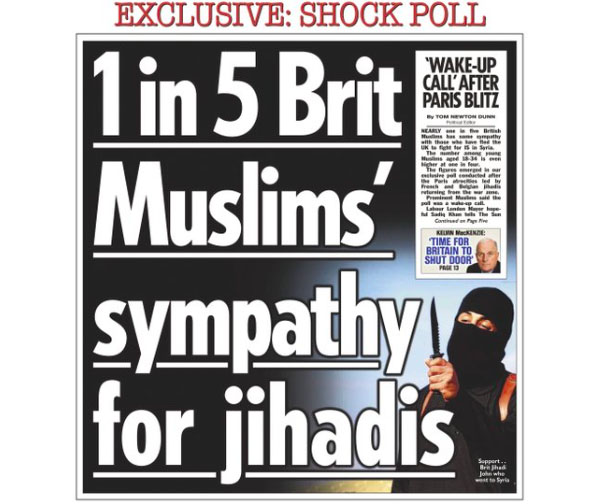 Screenshot: The UK's Independent Press Standards received 450 complaints about the front page of The Sun.

British tabloid The Sun is facing an immense backlash after publishing a front-page story with the questionable claim that “1 in 5 Brit Muslims’ Sympathy for jihadis” at a time when Islamaphobia is on the rise in the UK. So far, the publication has inspired a record number of 450 complaints made to the UK's Independent Press Standards Organisation and a popular hashtag, #1in5Muslims, lampooning The Sun's Islamophobia.

Of the UK's population of 64 million, about 5% is Muslim. The Sun arrived at its extraordinary claim through a telephone survey of 1,003 Muslims carried out by polling company Survation, in which respondents were asked to choose among a list of statements (which do not include “jihadi”, even though the word appears in The Sun's headline).

The Sun, which is the newspaper with the largest daily circulation in the UK, added together the last two groups to reach 20%, or 1 in 5.

Other criticism has been directed at Survation's methodology, which included phoning people with “Muslim surnames”, and at the lack of control group to see how people of other faiths responded to the same questions. The Sun originally approached a different survey company, which refused to carry out the poll because, according to the Guardian, “it could not be confident that it could accurately represent the British Muslim population within the timeframe and budget set by the paper.”

A touch of humour to counter Islamaphobia

Islamophobia is on a rise in the UK. According to latest figures, there has been 300 percent increase in Islamophobic hate crimes in the week following Paris attacks. These figures were collected by Tell Mama Helpline, an organisation that measures anti-Muslims attacks, both verbal and physical, across the country. According to the report, which was prepared for the government's working group on anti-Muslim hatred:

Most victims of the UK hate crimes were Muslim girls and women aged from 14 to 45 in traditional Islamic dress. The perpetrators were mainly white males aged from 15 to 35 […] the reported attacks were in public places, including on buses and trains. Thirty-four victims were women wearing the hijab, while eight involved young children.

Meanwhile, Twitter users around the world have mocked The Sun’s headline and story using the hashtag #1in5Muslims to offer similarly dubious, but much more hilarious claims about Muslims.

#1in5Muslims is married to their cousin. The other 4 are trying very hard to do the same.

#1in5Muslims go to mosques only during Ramadan. To socialise and have free food.

#1in5Muslims are French… if they score. Otherwise, they're Arab. pic.twitter.com/YY4h7CYbOG

#1in5Muslims won the Nobel Prize before they were old enough to start college pic.twitter.com/5YSU50ZOIF

#1in5Muslims probably uses this at work. Especially in #Dubai pic.twitter.com/FJO6nrhJW6

#1in5Muslims have a secret pet that looks like this. pic.twitter.com/h7lsH2uXoi

Users seem to be appreciating the lighthearted responses: