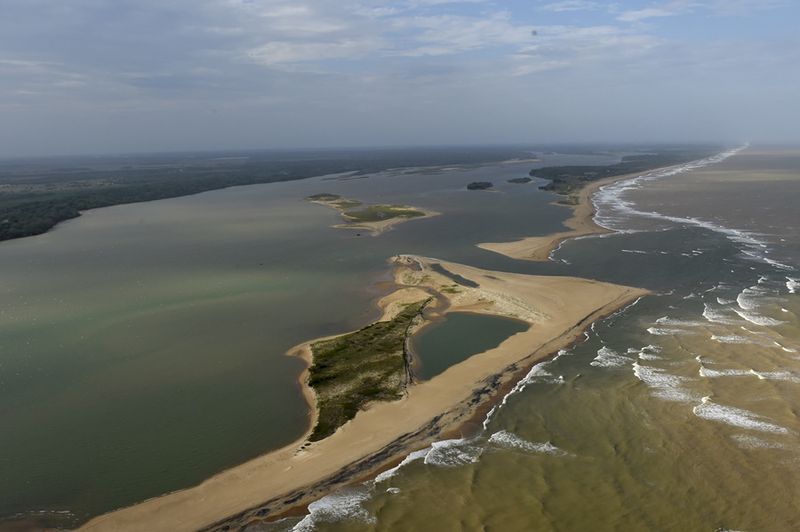 The mud that came from the Samarco dams with mining waste reached the mouth of the Rio Doce (Sweet River), located in in the state of Espírito Santo. Foto: Fred Loureiro/Secom, use permitted

When the Brazilian poet Carlos Drummond de Andrade wrote “Lira Itabirana” in 1984, he certainly didn't think of it as a prophecy. “The river? It's sweet. Vale? Bitter”, the poem goes.

On 5 November, the collapse of a dam belonging to mining company Samarco, a joint venture between Vale (Brazil) and BHP Billinton (Australia), poured an avalanche of 62 billion liters of mining waste into the Rio Doce (the “sweet river”) watershed in the southeastern region of Brazil. “If only the load was lighter,” Drummond de Andrade wrote 30 years ago.

After flowing more than 600 kilometers down the Sweet River, bringing despair to several cities bathed by it, the mud started to empty into the Atlantic Ocean in the week of 23 of November.

And if the impact of the toxic waste on the riverbed was extremely worrying, experts warn that the damage to the marine ecosystem could be even bigger, since it is more vulnerable than its terrestrial counterpart. Biologist André Ruschi, director of the school Biologic Station Augusto Ruschi in the state of Espírito Santo, says that the damage could be equivalent of “decimating the Pantanal, the world's largest tropical wetland area.

The mouth of the Sweet River is close to a nesting ground for the leatherback sea turtle, the biggest turtle species to inhabit the Brazilian coast. The timing couldn't be worst: November is mating season for those turtles. The Tamar Project has taken the initiative to move the nests away from the beach, but no one is sure of what the longer-term effects will be, since turtles always come back to the same place to lay their eggs year after year.

Chronology of an ecocide 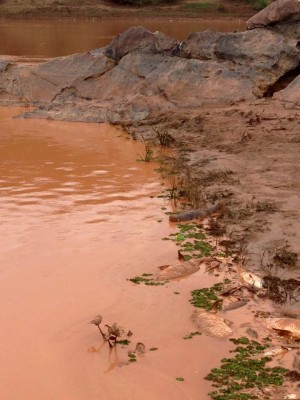 Dead fish on the banks of the river after the passage of the mud. Photo: Apurina Krenak/Facebook

The collapsed dam, called “Fundão”, is located on the eastern part of Minas Gerais state near the city of Mariana. Around Mariana lies Bento Rodrigues, a village home to 600 people that was completely engulfed by the toxic avalanche and risks disappearing off the map. Seven people have died and 12 are still missing, nine of whom are Samarco employees.

The mud merciless swam down the Rio Doce, hitting other towns and reaching the state of Espírito Santo. In total, about 800,000 people were affected by water supply interruptions in those places.

Samarco and Vale managed to deliver 250,000 liters of water in tank trucks to the population of Governador Valadares, home to 240,000 people (the largest population center in eastern Minas Gerais), but the water was soon discovered to contain large amounts of kerosene, making it unsuitable for drinking.

This was not the only clumsy attempt by Samarco to mitigate the impact since November 5. In the week after the dam collapsed, the company gave a press conference asserting that the mud wasn't toxic, but two lab analyses conducted by the towns of Governador Valadares and Baixo Guandu detected high levels of iron and other metals such as mercury in it.

Experts explained that even if the composition of the waste isn't toxic in itself, the mud acts as a “sponge”, attracting other pollutants to the river. 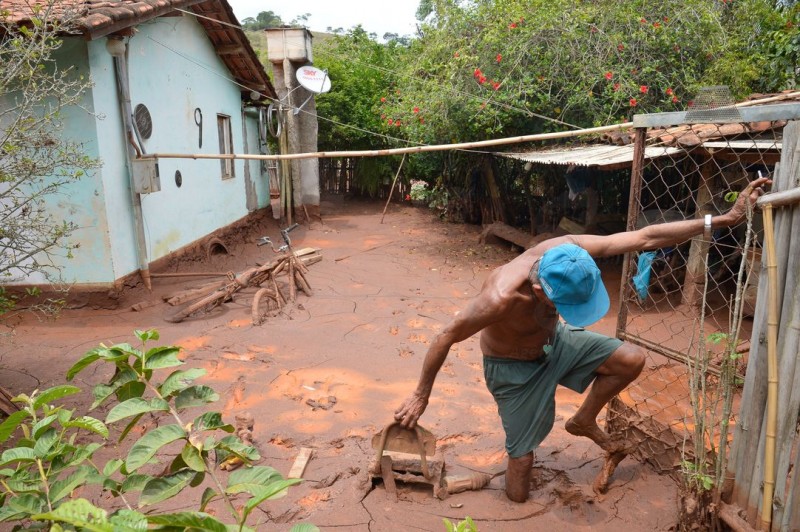 Citizen of Barra Longa, one of the towns hit by the mud. Photo: Antonio Cruz/Agência Brasil CC 3.0

The state governor of Minas Gerais, Fernando Pimentel, of the ruling Workers’ Party, gave a press conference in the headquarters of Samarco itself, defending the company and asking for “caution” before pointing fingers. The governor's attitude attracted criticism from citizens. Fabrício Costa, who is from Minas Gerais, commented on his Facebook page:

Can anyone imagine after the Fukushima disaster, the Japanese Prime Minister Shinzo Abe going to the headquarters of the company that manages the nuclear power plant and from there giving a press conference saying that the company has been doing its part to mitigate the damage to the victims and the environment? […]

Similarly, like Maurício Caleiro said, “Imagine Obama at the headquarters of Exxon, assuring that the company is taking all the necessary measures”. […]

That's exactly what happened in my state. Governor Fernando Pimentel, doing some public relations for the company, walks down to Samarco and from there gives a press conference saying that the same company that caused this ecocide is doing everything it can and that “we can't point fingers before a technical investigation is conducted”.

The Brazilian press has had restricted access to affected sites, controlled by Samarco. The citizens of the villages hit by the mud have been removed to hotels, which also makes press access difficult since visiting hours are controlled. All the clean-up work is being conducted by Samarco/Vale, who, until now, still hasn't explained the causes of the accident.

The federal government has established a fine for Samarco of R$250 million (US$70 million). In 2014, the company had revenues of about R$7.6 billion (US$2 billion).

The end of the Rio Doce?

The Mariana disaster is already being nicknamed the “Brazilian Fukushima”. The shocking images of the devastation, the lack of answers about the causes of the accident and the passive attitude of the federal and state governments have scandalized and angered the public.

The little village of Bento Rodrigues, unknown to many Brazilians, became the center of a national debate on Brazil's apparent failed environmental policies. An old video showing life in Bento Rodrigues before the tragedy has made the rounds on Facebook throughout the past week:

About the video, columnist for O Globo newspaper Cora Ronai wrote on her Facebook page:

I think about the lives that don't exist anymore, about their lives and the lives of so many other people affected by this tragedy. I think about the little villages that we're not even hearing about, about the animals, about the countryside songs, the vanished afternoons, the ease that will never be again, and I feel an enormous sadness, a profound anger and unspeakable shame to live in a such negligent and irresponsible country.

The toxic mud contaminated land and water, killing a large part of the fauna and flora in its path. Biologists and ecologists fear that it might alter the course of the river and its fauna forever, since the mud will likely settle on its riverbed, altering the morphology of the water. Worries that endemic species from the region might go extinct are also circulating.

Luiz Carlos Azenha uploaded a video to Vimeo of dead fish in the river:

Biologist Maurício Ehrlich told newspaper Folha de São Paulo that the mud might transform the river banks into “deserts of mud” and that the reconstitution of the soil might take hundreds of years (the geological timeframe for a new soil to form).

But if Brazilian authorities are accused of a lack of leadership to mitigate the impacts of the disaster, ordinary citizens promptly took the matter into their own hands. Residents, fishermen, scouts and biologists set up operations nicknamed “Noah's Arc”, salvaging different species from the river before the mud arrived. Neighboring cities also quickly donated water to the towns hit by the waste.

The Independent Group for Analysis of Environmental Impact (GIAIA) created a Facebook group to mobilize a task force of citizen scientists, guiding those interested on the basic protocols for collecting water samples from the river, so that they could independently analyse its quality later on.

GIAIA also launched a crowdfunding campaign to cover the costs of an independent study of the environmental impacts caused by the mud. In a few days, the groups raised more than R$70,000 (US$18,000), almost 50% above its original target.

Citizen efforts aside, many are pointing out that it's crucial to punish those responsible for the tragedy: online petitions have been circulating demanding from the company and the government justice for victims, and the hashtag #NotAnAccident (#NãoFoiAcidente) has been appearing on social media in the past weeks.

Minas Gerais literally translates to “general mines”. The name is no accident: since colonial times, mining activity has been crucial to the public revenue of this state, which prompted a cosy relationship between government and extractive industries.

This relationship is even more evident in the cities closer to the mines themselves. About 80% of the public revenue of the city of Mariana, for example, comes from the Germano mine, owned by Samarco. However, in the whole of Minas Gerais state there are only four public inspectors to supervise more than 700 waste dams. According to one member of the Movement of People Affected by Dams (MAB), Minas Gerais has at least 50 dams under alert for risk of collapse.

On 18 November, the company acknowledged that two other dams in the region, Santarém and Germano, risk collapsing as well. The Germano dam, the largest of them, is the one in the most critical state. 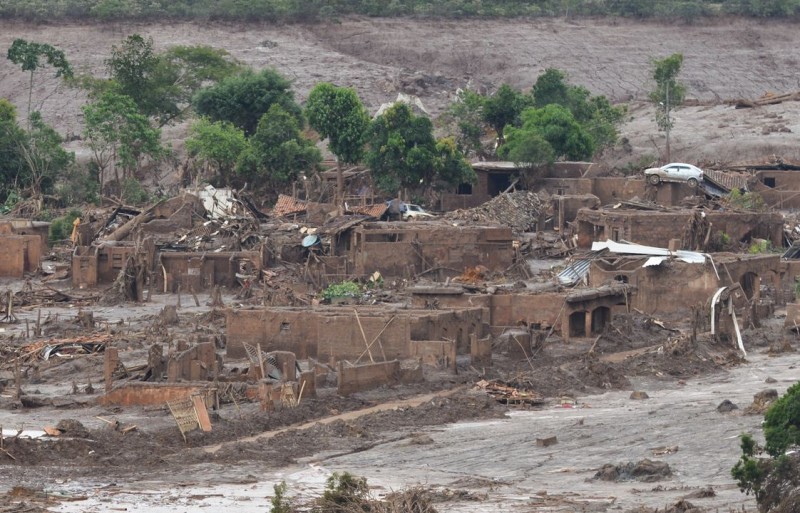 Bento Rodrigues village, in Mariana (MG), destroyed after being hit by an avalanche of mud. Photo: Antonio Cruz/Agência Brasil CC 3.0

The newspaper of the Institute of Arts and Social Communication of Fluminense Federal University highlighted a technical report from 2013, requested by the state prosecutor's office of Minas Gerais, that warned of the risks of collapse among Samarco dams.

They also pointed out that Australian BHP Billinton was involved in a similar disaster in Papua New Guinea in the 1980s, where billions of liters of mining waste were poured into the river Ok Tedi, affecting the lives of about 50,000 people.

Vale, the other company behind Samarco, also isn't just some small enterprise. It's the third biggest mining company in the world by some measures, with operations on five continents. Originally a state company, it was privatized in 1997 in a process allegedly clouded by irregularities that were never investigated.

Though both companies, in theory, have know-how when it comes to disaster management, they have been accused of using Samarco as a shield to distance themselves from the media after the tragedy.

Accident or not, the pain of the people is clear. In the minidocumentary “Doce Rio” uploaded a week ago, Governador Valadares native Caíque Castro assures that “with all we're going through, faith must not falter”.