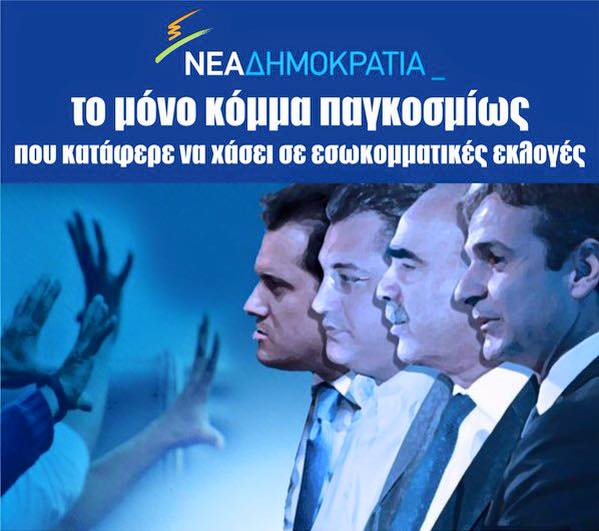 The caption reads: “New Democracy, the only political party in the whole world that achieved loosing in its own internal party elections.” Image seen at “Leme tin Alitheia” (We tell The Truth) Facebook page, widely circulated online.

After a turbulent pre-election period, followed by an unexpectedly large victory in September 2015 voting for Prime Minister Alexis Tsipras's political party SYRIZA, Greece's biggest opposition party, New Democracy, was supposed to hold an internal election to choose a new party president on Sunday, November 22. During the past three months, four candidates (Evaggelos Meϊmarakis, Kyriakos Mitsotakis, Adonis Georgiadis, and Apostolos Tzitzikostas) have campaigned nearly everywhere imaginable, visiting cities and reaching through Greece's mainstream and social media to tell the public about their platforms and visions for the future of the party.

On Sunday morning, though, with the party's supporters already gathered at polling stations, the process for counting votes malfunctioned, leading to election's postponement.

According to reports, the company “Infosolution” won a contract against three competitors to manage the voting process. That Infosolution's own website is still “under construction” did not seem to worry the officials in New Democracy who chose it. The malfunction on November 22 that's made the election impossible is believed to be a glitch that Infosolution's software suffered from an error that made it impossible to synchronize voting machines with the party's electronic electoral register, which is necessary to prevent double voting.

New Democracy's incapability of holding its own party elections for a new president is a globally trending topic.

The final screen before the system broke down.

Twittergr on fire mocking @neademokratia for not being able to carry out party leader elections #eklogesnd is a TT pic.twitter.com/Zjj300ofSO

New Democracy's election fiasco begs the qstn: if they cannot organize a vote who will trust them 2 run the country? https://t.co/YPmchqthCW

Just woke up, found out about the #eklogesnd fiasco. Can't. Stop. Laughing. What a sorry state for the opposition. And the country.

#eklogesnd Elections for the new @neademocratia leader postponed this morning after software glitz! This party aims to govern again #Greece.

The Greek government itself couldn't resist the opportunity to mock its opponents on Twitter:

SYRIZA: We hope that the country will soon have a serious and responsible opposition party.

CNN Greece reported that angry New-Democracy supporters are looking for Mr. Andreas Papamimikos (the President of the country's Central Election Committee and the party's Secretary), believing him to be responsible for the fiasco.

In the aftermath of the botched election, the party's next steps remain unclear. Whatever New Democracy and its four candidates decide to do, they can likely expect a rough period ahead, until they live down the embarrassment of this weekend.