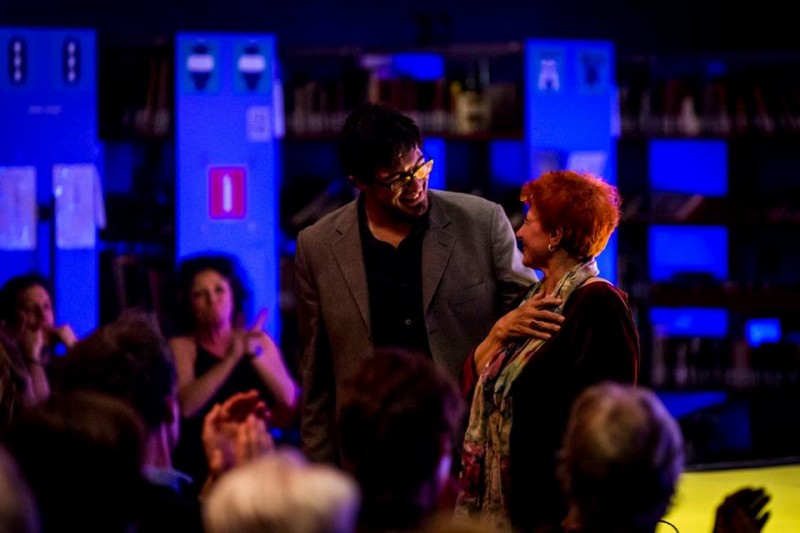 In the spirit of cultural exchange and the celebration of ethnic hybrids, the Mezrab was created to gather people around music and storytelling. Located in Amsterdam, the Mezrab is a space where people come together to share stories, music, rhythms, and more. Today, it's also become known for concerts, improv, and comedy, and it represents a beloved spot for culture lovers in Amsterdam. Following years of charming storytelling nights, a school to teach this very art opened in this cultural center not long ago. The idea of the Mezrab, moreover, has developed together with its founder, Sahand Sahebdivani, and his family. Resilience, identity, art, and a bit of jinns (Arabian and Muslim folklore demons)—it's all part of the Mezrab's story.

To learn more about the Mezrab, Global Voices recently spoke to Sahand, who told us about its origins and his own beginning. He discussed cultural hybrids, women’s representation in traditional stories from Iran, and the story of the Mezrab, which started as a small family tradition and today is one of Amsterdam’s most celebrated cultural spaces.

Basically [the Mezrab] starts with two key ingredients: I grew up with my parents having all these talents, that they weren’t using. They were highly educated but when they came here [to the Netherlands], all they could do was wash and cook, which they did, without complaining. This is a life they reconciled with. But at the same time at home, they were these amazing, cultured people. Always involved with cooking, reciting poetry, singing.

When I was about 20 I started inviting people to my house, to eat together […]. It became such a success that we opened a place where this could also happen. To be fair, when I was ten my dad opened a similar place, a cultural center in Amsterdam. It was called Khaneye Aftab (“The House of Sunlight”), and this place was close to the Mezrab. I remember I saw my first Persian storytellers there. They would come from France. A lot of cool things happened there. My dad would cook, there was video tape music, poetry, but it didn’t work because it was only for Iranians. Everything that happened was in Persian. So, non Persians wouldn’t feel at home there. […]

[So, we thought of] another place like this, but open for all cultures. We opened this place that was about 30 square meters. I remember it would strongly appeal to people from South Europe, Spain, Italy, Latin America. Not so much from the Middle East as you would expect, but a lot of Latin Americans, Spaniards, Italians, Portuguese… Few Kurdish people… In 5 years we did storytelling, but mostly we had music as a way to connect people. We did a lot of jam sessions. For me, that place was my conservatory. I never studied formal music, so playing there every week was very important. I learned in the field how to make music. That was the birth of the Mezrab.

As the project developed, Sahand trained himself as a storyteller and realized the art form's need for a bigger stage. It’s this way that the Mezrab started to become known as a place where storytellers could go and tell all kinds of stories. Real, mythological, imagined, and from different traditions—in both English and Dutch. The online presence of the Mezrab also started to develop, and this evolution is visible on YouTube.

Both the Mezrab Cafe and fans share videos of performances. These recordings offer a taste of what this phenomenon is about. A video from 8 years ago, for instance, shows a jam session taking place in room 20 square meters (about 200 square feet), where Parvin, Sahand’s mother, accompanies the musicians.

Some videos of this period are available through MezrabCafe on Youtube:

Storytelling is about more than passing old tales from one generation to the next; it's also about recovering lost narratives, like stories highlighting the roles of women in old epics, for example. In this way, the Mezrab embraces ideas and movements that aren't just about intercultural communication, but also equality. These stories come from distant, ancient places, but they resonate with the ideals of our time. The Mezrab has become a place of living dialogue between the past and present.

There is a bit of an idealist me when I tell a story. For sure this is true. But I think the wrong approach would be to find stories and then to put my idealism in the stories. What appeals to me is that a lot of these stories already have these ideas. Much more than we would expect. We come from countries—I’m thinking of the Middle East, or maybe when we look at India—where women have an inferior role to men.

What I could do is that I could find these stories of oppression and change them to suit my ideals, but I don’t think the good way of going about it, specially if the stories themselves already have so much empowering stories about women. So, for instance the story of Rostam and Tahmineh. This is a story that as a kid my father would tell me as an example of strength in a woman. […] At the end there are so many examples of strong fierce women. My idealism is more to point that out than to try to invent those details in the story.

It’s very beautiful to see that these strong women exist in these stories, and it’s also in a way, quite gratifying to know that the current regimes, that want to keep women down, are ones who have to change the stories, to fit their narrative.

Finally the same thing goes for nationalism, because Iranians, they can be incredibly nationalistic, horribly nationalistic, and if you’re very nationalistic one of your points of pride is this Shahnameh [the epic poem written by the Persian poet Ferdowsi]. Now, the most important heroes of the Shahnameh they were all mixed of Iranian and the blood of the enemy. Almost none of them were “pure blood” Iranians. They all had a grandparent or a mother that was from the so-called “enemy side,” and, in a way it can serve as an antidote, this book, this old collection of stories. That for me is very inspiring.

In the second part of this interview, Sahand talks more in-depth about people's encounters, cultural hybrids, and the power of stories, both online and offline.