On Covering the Paris Attacks, and Other Thoughts on Journalism 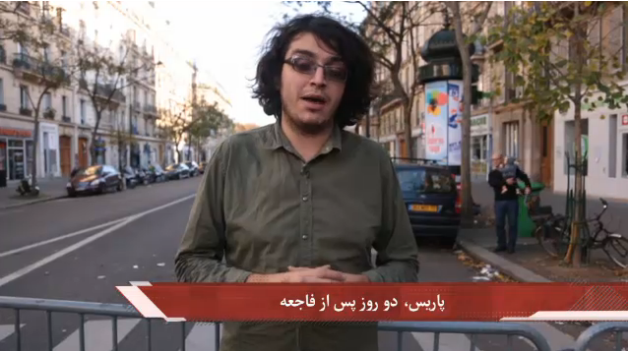 Arash Azizi reported on Parisian reactions to the November 13, 2015 attacks near the Bataclan theatre, scene of one of the attacks, on the day after the events. Image from Manoto report.

Arash Azizi is an Iranian journalist who has worked for BBC and is currently a journalist for the UK-based Persian media outlet Manoto. He was sent on assignment to Paris on Saturday November 14, the day after the attacks to cover the visit of Iranian President Hassan Rouhani. After the President's visit was canceled, Azizi was left covering the aftermath of the attacks.

“You are just like other mainstream journalists,” wrote a fellow leftist friend, angry at my casual suggestion that some deaths are more “newsworthy” than others (my putting the term in quotation marks not having helped much, it seems).

My original argument, however, was simple: human misery and death are constant happenings around the globe. What made the Paris attack such a global hit wasn’t a particularly high death count (it's somewhere around 130), but the fact that it had happened in a “first world” city that is usually considered “safe”. That explosions in Baghdad and Beirut, scarcely a day before, had killed a similar number of people, in similar types of attacks, perpetuated by the same group, didn’t change one sad fact. Sadly, massacres are much more common in Baghdad and Beirut and thus less “newsworthy”. By definition, the more uncommon an event, the more “newsworthy” it is. If, for instance, an entire year passed in Baghdad without any terrorist explosions, that would be quite newsworthy. In areas outside the 15 percent of the world where people live in bubbles of safety, human life is more easily taken away.

Did my friend not have the right to be angry?

Of course she did. That our world is so unequal is the brutal legacy of hundreds of years of colonialism and oppression. All the joyous celebrations of “globalization” aside, the fact remains that in 2015, our global system is still feudalistic in one fundamental sense: where you are born determines your chances of success (or how long you will live) than almost any other factor.

Life expectancy in Africa’s richest country, South Africa, is 59 years. That’s a good 20 years lower than Europe or parts of East Asia. To make another comparison, that is just nine years higher than the average world life expectancy in 1950, and 11 years lower than the current world average of 70. And looking at the numbers for black South Africans gives an even clearer picture of the startlingly unequal world we live in. Media must find a way to remind the public of this fundamental reality.

But the point remains that it is not “The Media” (I capitalize deliberately here) that somehow miraculously and mischievously runs a racist conspiracy to “value” some deaths more than others. Mainstream media tend to reflect some of the existing norms, values and prejudices of a society, though thankfully some public service outlets, such as the BBC or Canada's CBC, also challenge many of these prejudices.

The condescending view of certain liberals that the masses are stupefied by The Media is not quite true. Dark forces like racism and prejudice have deep roots in our societies, and different media work differently around them. Some choose to fight them, some encourage them (think Fox News). But the Orwellian conception of a single “Mainstream Media” that runs our brains, à la 1984, doesn’t quite match the reality of things. 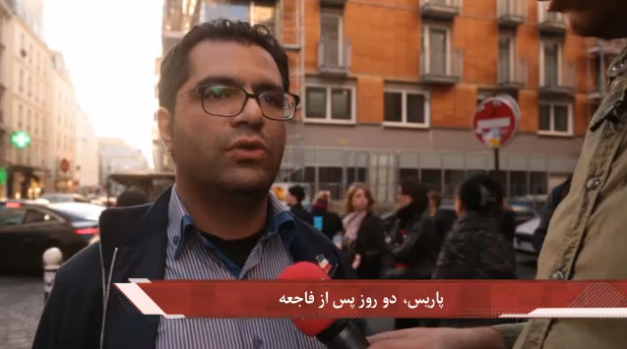 Arash interviewed an Iranian-Parisian who canceled plans to attend the concert at the Bataclan theatre that was disrupted by the attacks. Image from Manoto report.

It is true that monopoly ownership in media is a problem in most countries. In this capitalist world we live in, most of our information sources are controlled by just a handful of people. Even in the case of public service media like the BBC, democratic oversight is missing, and certain “men in suits” tend to run things at the highest levels. But, as this journalist can tell you, journalists and media workers aren’t simply sheep without agency, merely channeling the propaganda of media owners. Years of unionizing and struggle on the part of journalists means that we have gotten a certain degree of autonomy. People don’t usually become journalists because they want to be the hacks of the ruling class. Generally, it's because they're committed to some version of truth-telling and speaking truth to power.

Which brings me back to the Paris versus Baghdad and Beirut comparison.

Is it true that “The Media” didn't report on those atrocities? Of course, not. They did and they do everyday. As I check the BBC website right now, the news of deaths in Palestine and civil war in Colombia are on the front page. Or take the example of refugees. Can we honestly say that “The Media” didn’t cover the refugees story sufficiently? Or that they were anti-refugee? Of course, this also depends on which media you are talking about—but the Daily Mails of this world were, arguably, not more prominent than media who reported the story with compassion.

So if knowledge of international events is not widespread enough in a certain society, it can’t simply be fault of The Media.

This doesn’t mean that you don’t get to criticize media coverage. It just means that the criticism loses its meaning if it is done without much study or thought and trades in generalizations.

One of the criticisms that could be made is the short historical memory of most journalists. As a journalist and also as a student of history, I am very aware of that. As people whose bread and butter is tied to daily changes in a situation, journalists can sometimes miss the bigger (historical) picture. Common events can be mistaken for phenomenal; common prejudices that a dose of historical knowledge could easily refute can be taken for granted.

For example, the horrendous attacks of last Friday were widely reported as “unprecedented” in post-war France. On 17 October 1961, however, a group of 30,000 people demonstrating in Paris in favor of Algerian independence was brutally repressed by the French police. The official estimate of the number of deaths is 40, though it is believed to have been as many as 200.

But there wasn’t some racist conspiracy behind this lack of reporting. It was basic lack of historical knowledge, a serious problem for many journalists, who often are more versed in current affairs than in history, even though the latter is arguably as, if not more, useful, to the honest exercise of our profession.

What to take from all this?

That instead of making blanket conspiratorial denouncements, it is more useful to engage your media and show where it is wrong—but also remember that media outlets don’t exist outside society.

One should also bear in mind the most persistent cause of bad journalism: lack of resources.

With the recent disruptions in the media industry, which are themselves the result of an anarchic and irrational capitalist economy, many outlets simply don’t employ enough people to produce the quality journalism the public deserves. Will you do anything to change that? Add media consumption to the household budget? Call your MP and ask for more funding for the publicly-owned media?

As your correspondent landed in Paris a day after the massacre, he had just about 24 hours to tell a story on TV. Where should I have gone? Who should I have talked to? How to maintain a balance between telling personal human stories and giving you the bigger picture? Show the beautiful feelings of solidarity in Paris but also report the ugly side of things? These are questions journalists always have to consider, while knowing that they often lack sufficient resources to do the kind of stories they would wish to tell.

After a busy day of filming, my cameraman and I were walking the streets of Paris, anxiously debating whether we had done a fair job of reporting that day. Thinking we were done for the day, we suddenly came upon a panicked group of hundreds running away from what we were certain were gun shots (they later turned out to be firecrackers). Had a second round of attacks started? Were there terrorists mere steps away? 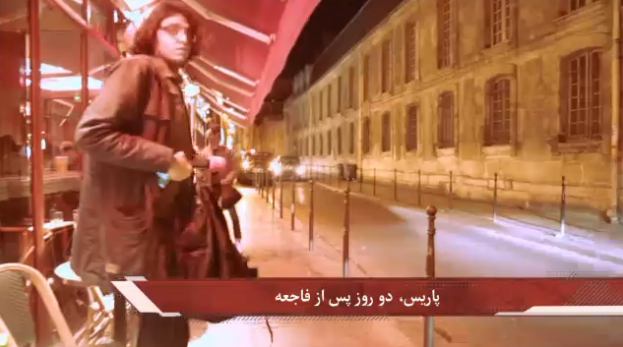 Arash's cameraman starts rolling as gunshots are heard on the streets of Paris the day after the attacks. The sounds were later revealed to be firecrackers.

Instinct might have caused us to run away but instead the cameraman whipped out his camera so we could tell the story as it happened. We didn't want to sensationalize events, but we simply couldn’t do anything else.

At the end of the day, there is one thing you can trust: it is that, irrespective of bias, most journalists have one simple desire, and that's to tell a good story.