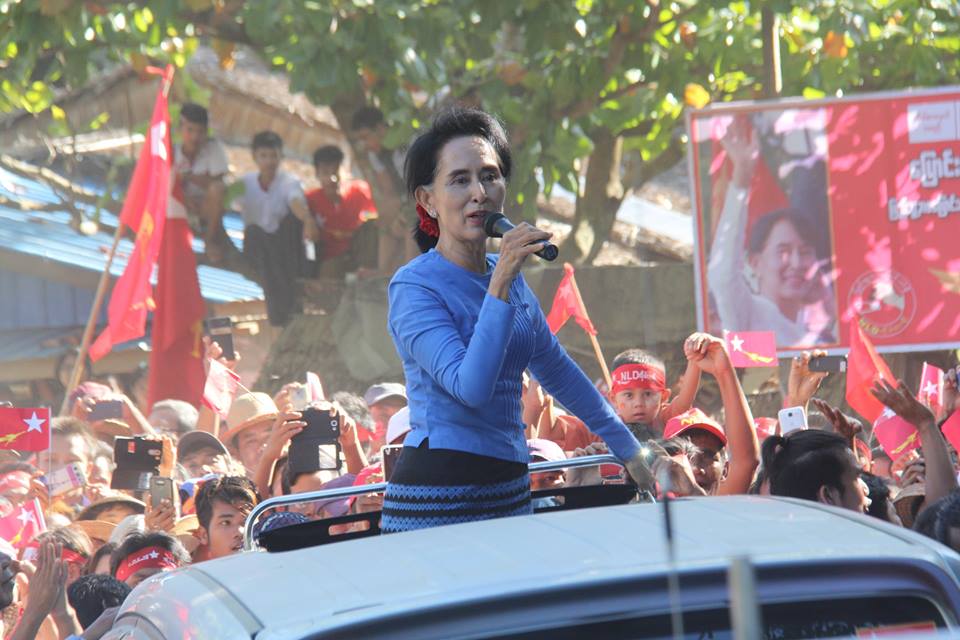 The opposition National League for Democracy secured a landslide victory in the recent election in Myanmar. It is headed by Aung San Suu Kyi, a former political prisoner. Photo from the Facebook page of the NLD

This edited article by Nyein Nyein is from The Irrawaddy, an independent news site in Myanmar, and is republished on Global Voices as part of a content-sharing agreement.

Despite having been locked away for 21 years, Aung Kyaw Soe, 47, chose to run as a candidate of the opposition party National League for Democracy (NLD) in sparsely populated Karenni State, where he was born.

Securing a seat in the Upper House representing the Shadaw Township, among the rivals he defeated was Aung Min, head of the Myanmar Peace Center and a confidante of Myanmar's incumbent President Thein Sein, who was running as a well-funded independent.

Myanmar’s November 8 election saw a landslide victory by the NLD, but the result is historic for many reasons. Although technically Myanmar's second general election, many considered the vote to be the country's first free and fair election following decades of authoritarian rule and political turmoil. And of the 1,139 candidates declared winners so far, 110—or around 10 percent—have spent years behind bars as political prisoners.

Aung Kyaw Soe, also known as Phoe Khwar, who will take his seat at the end of January alongside former political prisoners in the NLD and ethnic Mon, Zomi and Arakan parties, says his victory was far from certain. The new Upper House lawmaker said:

There are bigger duties ahead, but I decided to run in my state because it is in need of development. I was at a disadvantage from the start because my rivals were in better condition than I was in terms of power and money.

Many of those who spent time behind bars for their political activities plan to use their new platform in Naypyidaw, the nation's political capital, to call for an end to the incarceration of prisoners of conscience.

Arrested for being a member of the once-outlawed All Burma Students’ Democratic Front (ABSDF), Aung Kyaw Soe was sentenced to life in prison in 1990 but was released in 2012. Before entering politics, he worked with a local youth group in Karenni State.

According to the Assistance Association for Political Prisoners (AAPP), there are still 112 political prisoners in Myanmar, with 486 more people awaiting court hearings for protesting against farmland confiscation and advocating for peace, education reform, and justice.

Even with the changing political tide in Myanmar, it is unlikely that all political prisoners will be released until the new government takes office in 2016.

Tate Naing, secretary of the AAPP, said that he is hopeful that the current government will release more of the remaining political prisoners before it must hand over power. He said:

Bo Bo Oo, 51, another incoming Lower House lawmaker for Yangon’s Sanchaung, said that legislative changes have to be introduced gradually after members of parliament are sworn in.

“There are many amendments to be made, as well as some legislation to be removed,” he said, highlighting that many of the current political prisoners are being sentenced under section 18 of the Peaceful Assembly Law, which was enacted under the current government, along with other antiquated sections of the colonial-era Burma Penal Code and Unlawful Associations Act.

Bo Bo Oo was also a student activist at Rangoon University in 1988, and he was sentenced to 20 years in jail after communicating with the ABSDF in 1989, though he was never a member. He was sent to Insein Prison in September 1989 and released from Myin Chan prison in September 2009.

And like Aung Kyaw Soe, he beat out prominent politicians—such as Thu Wai of Myanmar's Democratic Party, Soe Win of the National Democratic Front, and Win Myint Than of the ruling Union Solidarity and Development Party—in the election. The former two parties did not win any seats in either house of Union Parliament.

Some of Myanmar’s most prominent faces are among the growing army of lawmakers who were once political dissidents, including NLD chairwoman and current lawmaker Aung San Suu Kyi; founder of the Rangoon School of Political Science Zin Mar Aung; 88 Generation Peace and Open Society leader Pyone Cho, rights activist Ma Thandar; poet Yi Mon (aka Tin Thit); current lawmakers Phyo Zeya Thaw and Sandar Min; and writer Nay Phone Latt, among many others.

The NLD’s elected members of parliament who spoke with The Irrawaddy highlighted the party’s policies on national reconciliation and said that they would work toward peace and justice for their constituents.