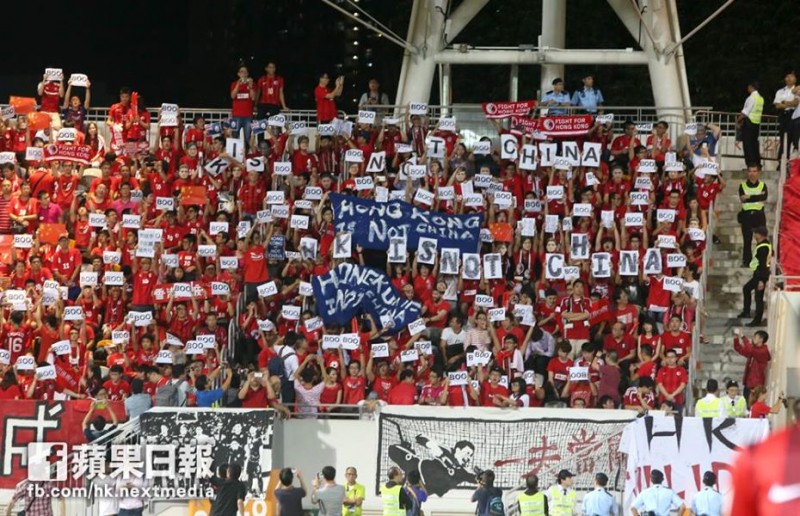 Tensions between China and Hong Kong are constantly spilling over into what's supposed to be non-political, such as city planning and subway baggage rules. [2] The latest to be affected is the football field.

Many Hong Kongers who were not interested in football before have turned into supporters of their city's team overnight following the 0-0 draw between China and Hong Kong during the second World Cup qualifier match on November 17.

The goalless draw put a dent in China's 2018 World Cup qualifying hopes. Beyond sports, some in Hong Kong saw a parallel between their team's parry against China on the football field and the Hong Kong people's efforts to safeguard their city against Beijing intervention.

The relationship between China and Hong Kong, a special administrative region of the mainland with a high degree of autonomy, has only gotten rockier in recent years. Beijing's has increasingly had a hand in many aspects of city governance, including the mechanism for the election of lawmakers and the city's top leader [4], local district and legislative council elections by coordinating pro-Beijing forces [5], the allocation of free-to-air TV licenses [6], and the appointment of Hong Kong University's vice president [7].

Hong Kong fans had previously booed the Chinese anthem, which has been shared by Hong Kong and the mainland Chinese football teams since 1997, when Hong Kong was returned to Chinese rule from the British, during a match with Qatar in early September. Those cries of disapproval were a direct and spontaneous response [9] to a poster designed and publicized by the mainland Chinese Football Association that read:

Don't underestimate any opponent. This team has people with black skin, yellow skin and white skin. For such a diverse team, be on guard!

Though the act could not be interpreted as disrespectful to Qatar since it was a verbal thumbs down to the Hong Kong team's own anthem, FIFA fined [10] the Hong Kong Football Association for the behavior and warned that further infringements would lead to more severe sanctions.

To avoid sanctions, Hong Kong football fans “booed” the national anthem with paper signs in the second qualifier match with China. Many also displayed slogans such as “We are Hong Kong” and “Hong Kong is not China” to emphasize the autonomous status of the city.

‘Either side can't win and can't lose’

Outside the football stadium, thousands of Hong Kong team supporters gathered in more than a dozen spots around the city to watch the match and cheer for the Hong Kong team together. 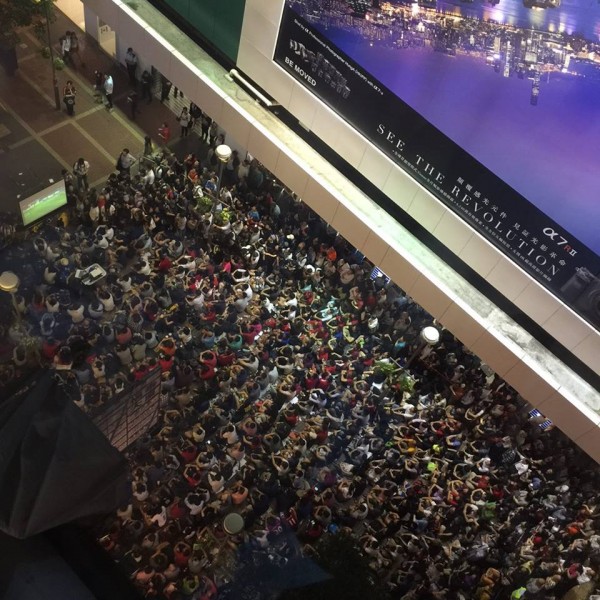 A few hundred people gathered outdoor in Mongkok to watch the match together and cheer for Hong Kong team. Photo from inmediahk.net's Facebook. CC: AT-NC.

While pro-Beijing politicians in Hong Kong bid people to stop bringing politics to the football field, mainland Chinese authorities threw fuel on the flames by adopting a real-name registration system [12] for the first qualifier match between Hong Kong and China that took place in Shenzhen, China, on September 3. Some Hong Kong fans who joined the Occupy Movement last year, which camped in downtown Hong Kong for months demanding citizens’ right to nominate their own leaders, claimed that they were forced to return their tickets following the identity verification process.

Before the second qualifier match, top Hong Kong government officials refrained from commenting on which team they supported. When posed with the question, Chief Executive C.Y Leung dodged and said that he would not be able to watch the game as he would be out of town.

“Farewell bridge”, a columnist for citizen news platform inmediahk.net, is one of the newly converted football fans. She saw the match and the 0-0 result as karma coming to Hong Kong [13]:

Some say that Hong Kong's spirit is a lose-lose situation.
Yes, Hong Kong's team won't give way to others, even though it's unlikely that the team will not qualify. Likewise, the Hong Kong people won't give up their belief in justice and the rule of law, even though they can't win against Beijing in a political match. With non-cooperative movements in civil society, filibusters in the Legislative Council, and universities’ resistance against Beijing intervention, Hong Kongers keep struggling against pro-Beijing forces. Though we are unlikely to gain victory, we keep insisting and never give in. […] Hong Kong people are very practical — unless they are cornered, the majority of people are apolitical. But the apolitical crowd is now waving a “die for Hong Kong” flag on the football field.
The ultimate reason is that Beijing does not have the wisdom of the former colonial government. It doesn't know how to show respect for the locals and uses repressive measures instead. But the Hong Kong people have also inherited the Cantonese rebel character in fighting against the Empire. Do not label Hong Kong people as colonial slaves; the problem lies with Beijing's governing tactics.
The 0-0 draw carries on in real life. Either side can't win and can't lose, either side won't give in. This is the karma coming to Hong Kong regarding China.