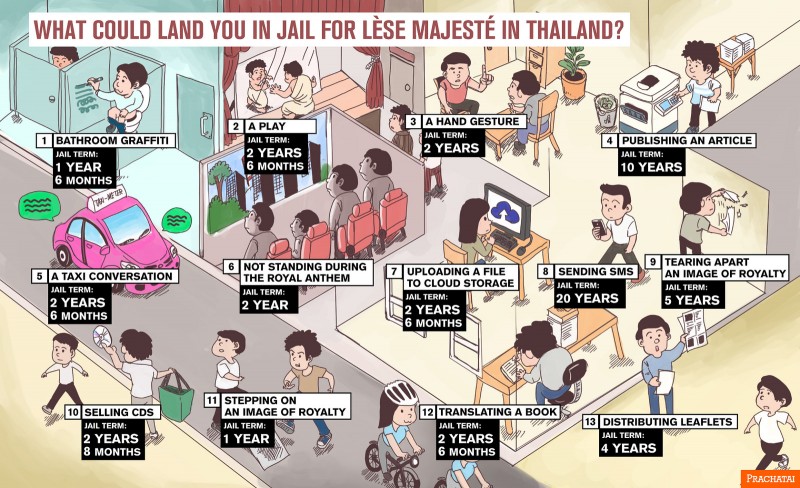 Summary of Lese Majeste cases in Thailand. Infographic from the Flickr page of Prachatai, a content partner of Global Voices

An infographic published by alternative news website Prachatai that summarizes the Lese Majeste (anti-royal insult law) cases in recent years in Thailand caught the attention of the country's junta, which immediately dispatched 10 officers to interrogate the English news editor of the website.

Thaweeporn Kummetha, editor of Prachatai English, confirmed that the army is unhappy over the infographic, which was “deemed overly broad in describing the kingdom’s strict law against defaming the monarchy.” The authorities added that the “graphic was too vague and might cause misunderstanding.”

Aside from highlighting the long prison sentences that accompany Lese Majeste convictions, the infographic also shows how an ordinary and seemingly harmless action can send someone to jail.

Thailand’s Lese Majeste law, or Article 112 of the Criminal Code, is considered by many human rights groups to be one of the harshest and obsolete in the world. Scholars and activists have been petitioning the government to reform the law for many years already.

Thailand’s king is a well-loved icon and a uniting force in the country. The government insists that the strict implementation of the Lese Majeste law is necessary to protect the monarchy and Thailand’s stability.

When the army grabbed power in 2014, the number of Lese Majeste-related cases spiked, which some attributed to the government’s tactic of using the law to silence critics and opposition leaders. The trend continued even though a military-appointed civilian government has been established already.

The infographic is posted in an article which links to specific Lese Majeste cases. For example, number one in the infographic refers to a musician who was arrested for writing an anti-monarchy graffiti in a mall bathroom. Number two is about a university play that ‘insulted’ the king.

But the most famous Lese Majeste case is number eight in the infographic, which refers to a senior citizen who was arrested for sending an SMS deemed offensive to the monarchy. His 20-year prison sentence and death while in detention sparked debate and intense criticism, not just in Thailand but in other countries as well.

Despite appeals from various human rights institutions, media organizations, and governments to reconsider its implementation of the Lese Majeste law, Thailand says the law is crucial to preserving national security. But free expression advocates continue to campaign for the review and even repeal of the law, which they think is being used by the junta as a tool of repression.

This is quite a relief because if Thaweeporn Kummetha were slapped with a Lese Majeste case, Prachatai would need to edit their infographic — to add that posting infographics can lead to a Lese Majeste detention in Thailand. 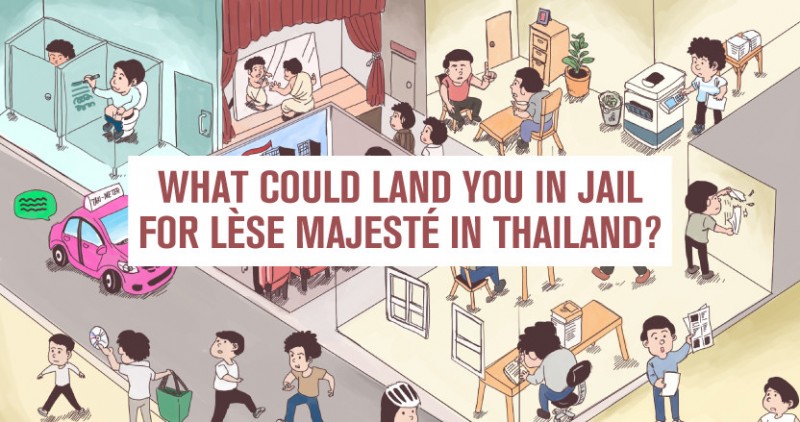