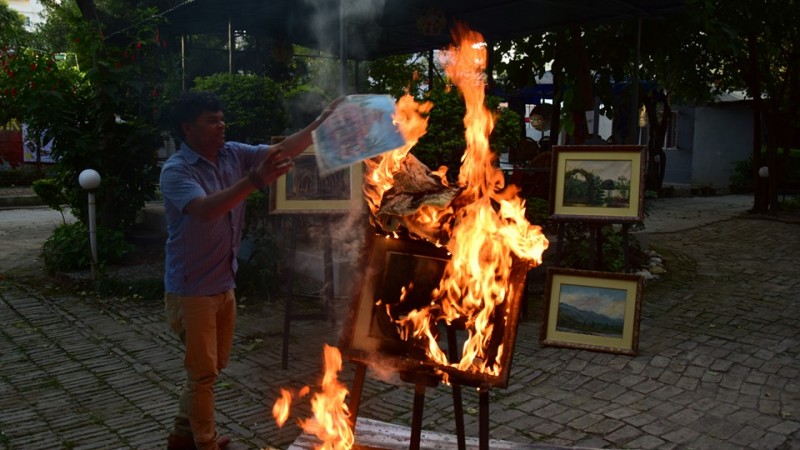 While Nepal has been pushed back to the days of yore, with Nepalese being compelled to cook food over firewood and pedal bicycles due to a lack of fuel stemming from India's so-called unofficial blockade, a Nepalese artist residing in London has burnt his valuable paintings in solidarity with innocent Madhesis killed amid the current conflict in Nepal.

Watch how one of the #Nepal‘s artists who is internationall renowned burnt his burden; Govinda Azad! – #peace! https://t.co/bsSRZEYLNK

Security forces have been brutal in their suppression of a popular movement in Madhes, the southern plains of Nepal; the unrest has to date claimed nearly 50 lives – most of them innocent civilians. The conflict erupted after the promulgation of a new constitution and escalated after the demands of protesters in the mid-western hills were met but the government turned a deaf ear to the demands of ethnic Tharus and Madhesis. The protests brought the nation to standstill once participants took to blocking points along Nepal's border. While India denies imposing any blockade of trade checkpoints, blaming the protesters instead for the hold-up, the halting of supplies has Nepal spinning into serious humanitarian crisis.

Govinda Sah ‘Azad’ is a man of moods and known for painting clouds, terming them nature’s emotions, to demonstrate invisible concepts like morality, the environment, the sublime and spirituality.

His emotions and intention to spread awareness of peace through art led him to embark on a cycle tour, “The 21st Century Is the Century of Art and Peace”, from east to west Nepal during the Maoist insurgency. From March until June 2000, Govinda pedalled across the country holding art shows, workshops and delivering lectures in schools and to community groups.

After 15 years, he returned to his country and burned his paintings from the cycle tour, dedicating them to the people who lost their lives for equality, respect and justice. The event, “Let’s Burn the Burden, Burn the Paintings: An Arts Protest for Peace and Humanity”, saw 28 of his oil paintings go up in flames in Kathmandu in October.

Here is a video of Govinda Sah uploaded by Katha Haru:

Sah hails from Rajbiraj, a small town in the southern plains. Coming from a middle class family, Govinda left for Delhi, India, just after his school and worked there as a signboard painter to nurture his childhood interest in drawing and sculpture. After few years he returned to Nepal, joined the Fine Arts College and later went to Dhaka, Bangladesh, and London, UK, to continue his further studies. 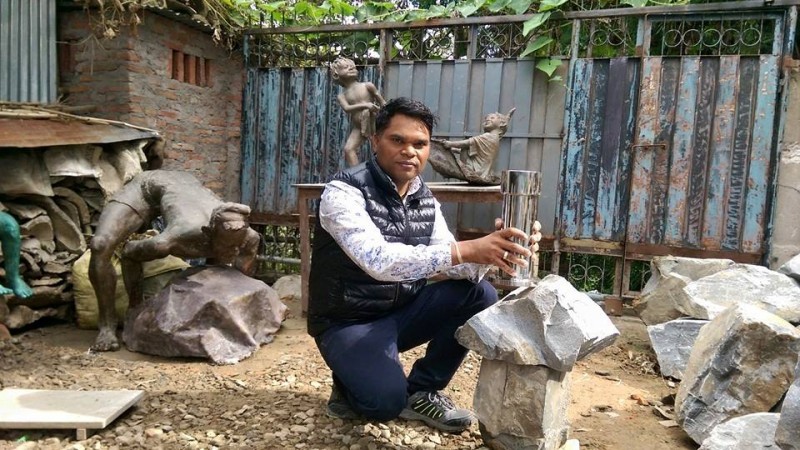 However, not everyone agreed with his form of protest. Krishna Adhikari wrote on Facebook:

Well things might change as hoped, and emotional state of hopelessness might change to hope as well. Like those who have already lost lives, the treasure of your work once burnt won’t be brought back. So find another way of expressing discontent than burning them. Artists have power to change pessimism to optimism, not the opposite.

Though people might criticise, he termed it a symbolic act to call upon not only fellow artists in Nepal and across the world, but also all Nepalese to support that the nation return to peace, where all citizens are able to live free of fear, violence, discrimination, injustice and division.

Sah isn't the first artist to destroy work to send a message. With his fiery stunt, he joins the likes of Italian painter Michelangelo, who had his own drawing burnt, American artist Robert Rauschenberg, who erased fellow countryman Willem de Kooning’s work, and Chinese artist Ai Wei Wei, who dropped an ancient Han dynasty vase.