Africans Wonder What Pope Francis’ Visit Will Achieve for the Continent 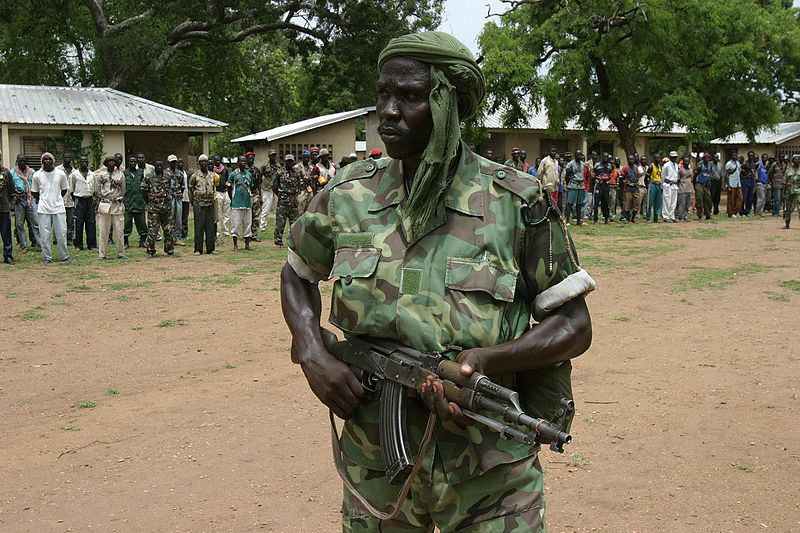 Rebel militia in Central African Republic. The pope hopes to bring peace and reconciliation to the country. Image released under Creative Commons by Flickr user hdptcar.

Pope Francis will make his first visit to Africa, travelling to Kenya, Uganda and the Central African Republic from November 25-30, 2015. During his trip, the pope is expected to deliver public masses, meet religious and political leaders, and visit a slum, a refugee camp and a mosque.

He is also expected to use the occasion to talk about reconciliation, unity and poverty. The Central African Republic is in a civil war waged between the predominantly Muslim Séléka rebel coalition and government forces, which began in late 2012. His visit there will make him the first pope to travel to an active war zone, according to Global Post.

France has described the pope's visit to the Central African Republic as risky as the French troops on a peacekeeping mission in the country cannot protect him. But despite security warnings, the visit to the country will go ahead.

The speculation over what the head of the Roman Catholic Church will achieve with his visit is running rampant online. Here are a few of the common themes that are circulating.

Some wondered how he could impact religious tensions, which have boiled over into bloody violence in recent years. Christian militias in the Central African Republic have carried out ethnic cleansing of the country's Muslims during the conflict, according to the United Nations, and in April 2015 members of militant group Al-Shabaab killed 147 people at Kenya's Garissa University College, allowing Muslims to go free and killing those who identified as Christian.

Peter Fabricius, a security consultant at the South African-based Institute for Security Studies, argued that the pope should have planned a joint visit with a Muslim leader:

And so it is a pity that Francis does not have a Muslim counterpart who could partner him on his missions of peace and reconciliation among religions. In an ideal world one could imagine the ‘popes’ of all faiths gathering in conclave to address and resolve all the horrible religious conflicts which continue to cause so much suffering to their own adherents and countless others caught in the cross-fire.

Nevertheless, by his highly active and increasingly visible political interventions around the world in the name of peace, reconciliation and mercy, Pope Francis may just still be inspiring and emboldening the leaders of other religions to follow his example.

If not, they will have something to answer for.

Kenya-based blogger Daniel Ominde identified how the pope might transform other areas with his message of peace:

The high profile visits which culminate with that of British Prime Minister David Cameron early 2016 will go a long way in returning confidence among tourists. Frequent terror attacks in Nairobi, Mombasa and most recently Garissa University where 147 people lost their lives significantly drove down Kenya’s earnings from the sector which was for a long time the country’s biggest foreign exchange earner.

It is my hope that the Pope will use this visit to remind the world that terror is a problem in Africa just like it is in the Western world where hundreds of lives have also been lost.

This visit comes at a time when religious tensions between Christians and Muslims are at an all-time high following increase in terrorism activities. Unlike his predecessors, the Pope is known for pushing a conciliatory agenda and visiting a region with a significant population of Muslims should provide him with an opportunity to reach out to Muslims and set the stone rolling for a process of inter-religious unity in the fight against extremism.

This approach will go a long way in defeating the Al-Shabaab propaganda that has been aimed at creating tension between Christian and Muslims. This I hope will be a key message during his public mass to be held at The University of Nairobi.

While we do not expect him to push for the legalization of homosexuality, Pope Francis will almost definitely encourage African governments to deal with homosexuals in more a humane manner. The Pope is on the record acknowledging that criminalizing homosexuality is extreme.

Homosexuality is a crime in Uganda, which can send gays and lesbians life imprisonment as well as jail anyone who did not report gay people to authorities.

However, according to the Library of Congress “public expression of love” between persons of the same sex is punishable by six months to two years of imprisonment or a fine, and there are no legal recognition of same-sex relationships.

Homosexuality is illegal in Kenya where same-sex activity is punishable with up to 14 years imprisonment, according to Kenya’s Penal Code.

In July 2013, Pope Francis showed understanding and compassion toward homosexuals when he said,“If someone is gay and searches for the Lord and has good will, who am I to judge?”

On the same issue, Emma Were Tinka in Uganda quoted the Archbishop of Gulu, Uganda:

Archbishop Odama: On homosexuality, ‘i don't think the Pope can divert from the teachings of the church’ #PopeInUganda

The plight of refugees

The Irish Jesuit Mission asked the pope to keep the plight of refugees in mind during his visit:

Civil war and other types of violence in Africa have forced many people to run away from countries such as the Democratic Republic of Congo, Central Africa Republic, Mali, South Sudan and Somalia. Figures released by the United Nations High Commissioner for Refugees (UNHCR) show that by mid-2014 there were 13 million refugees of concern to the organisation, 28% of them were fleeing conflicts in various African countries.

According the UNHCR, there are 460,000 refugees from Central African Republic, 10% of the country's population, living in Cameroon, Chad, Democratic Republic of the Congo and Republic of Congo.

Civil war in South Sudan has driven nearly half a million people into refugee camps in neighboring countries including Kenya and Uganda.

Dadaab, the site of the world's largest refugee camp, is located in Kenya where an estimated 332,455 refugees, mostly those running away from Al-Shabaab in Somalia, live.

Kenya-based Abdimalik Odowa shared a cartoon of Kenya's prayer requests to the pope:

Alvin Akoko in Nairobi pointed out three main issues he would like the Pope to discuss during his Kenyan visit:

Kenyan government removed homeless people and street vendors from the city during Obama's visit to Kenya. This will not be the case during Pope Francis’ visit.

In Uganda, however, vending will not be allowed during his visit.

Reflecting on the same subject of the visit by the two world leaders, Emmanuel Ngumbi remarked:

It is expected that 1.4 million people will attend his mass in Kenya alone.

Pope Francis’ visit to Uganda will make it the first African country to host three different reigning popes. Uganda was the only African country visited by Pope Paul VI in 1969. The next was Pope John Paul II in February 1993. Until 1969 no pope had ever visited Africa.