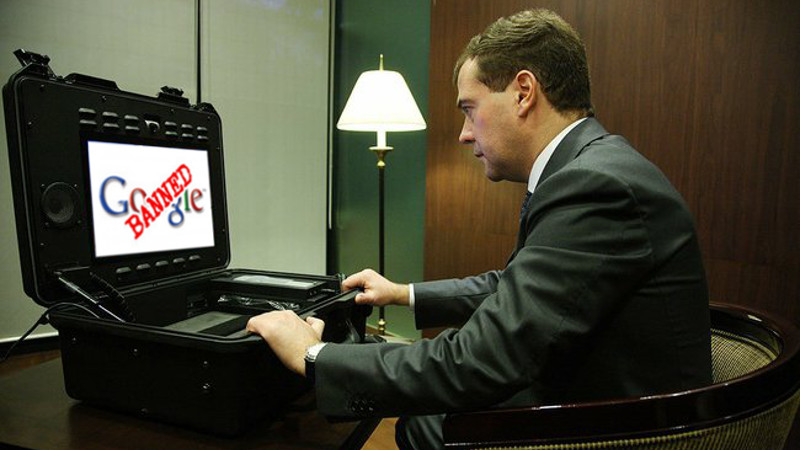 Prime Minister and social media aficionado Dmitry Medvedev and other Russian officials could face a ban on some online communications services. Images mixed by Tetyana Lokot.

According to Solovyov, many Russian officials “currently use software (such as Internet search engines and messaging apps) and communication tools (such as some phone models) through which foreign intelligence services can fairly easily access confidential and official information,” TASS news agency reports.

The draft bill suggests amendments to the Russian law “On state civil service in the Russian Federation,” namely Article 17 that defines activity prohibited for a state official. Solovyov proposes adding a ban on certain software and communication technology, though the proposal does not specify if the ban only applies to work-related communication, or to officials’ private conversations as well.

To [ban the] use [of] software products or means of communication technology that could be used for unsanctioned access to confidential or official information or data.

The text of the proposed draft bill does not provide a list of specific software applications covered by the law, but suggests such a list would be determined by a separate decree from the Russian President. The lawmaker himself told RBC news agency that his amendments are aimed at Western search engines Google and Yahoo!, as well as the WhatsApp messenger.

Solovyov explained that his initiative was motivated by the growing number of cyberattacks on the information systems used by Russian officials and said banning certain applications and communication devices would “help to greatly improve the security of confidential and official information.”

Violating the state civil service law (which Solovyov wants to amend) currently carries disciplinary and professional repercussions, but Solovyov believes that those who violate the suggested norm and continue to use foreign communication services could face administrative or even criminal responsibility, especially if their activity leads to information leaks and threatens national security.

Leonid Levin, head of the State Duma committee on information policy, told RBC news agency that he sees no need for such an amendment to the law. “There's a civil service law, the special services have their own guidelines. I see no point in additional regulation here,” Levin reportedly said.

On November 16, Russian lawmaker Aleksandr Ageyev appealed to the Russian state security service (FSB) to consider the possibility of restricting Russian users’ access to the Telegram messenger app, claiming the messenger was being used by the Islamic State group to coordinate attacks. Russian Communications Minister Nikolai Nikiforov disagreed and said the authorities shouldn't block Telegram or other messenger apps, but instead should “identify and prosecute those who engage in illegal activity.”

In July 2015, president of Russian communications provider Megafon, Ivan Tavrin, called for stricter legal regulations for WhatsApp, Viber, and Skype messengers. In June 2015, Alexandr Zharov, head of Russia's media watchdog Roscomnadzor, suggested Russia should develop its own national text messaging service, amid a drive to to replace foreign goods and services with native products and to boost national information security.