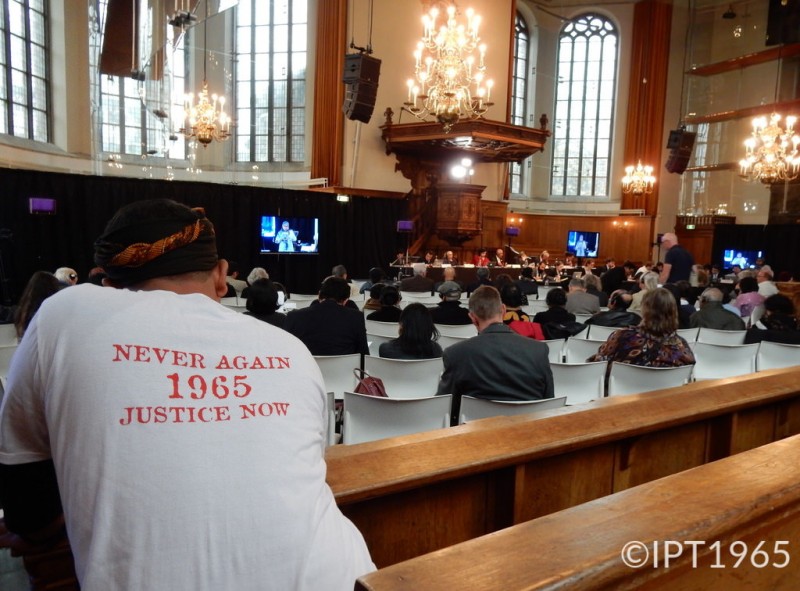 Opening day of the International People's Tribunal in The Hague about the 1965 mass killings in Indonesia. Photo from the Flickr page of the tribunal, CC 2.0.

An International People's Tribunal (IPT) was held in The Hague, last week, from November 10 to November 13, where testimonies were heard from survivors of the 1965 mass killings in Indonesia. The Indonesian government is accused of orchestrating an anti-communist purge that killed more than half a million people.

The majority killings took place in Java and Bali between 1965 and 1966. The victims were branded communists or sympathizers of the Indonesian Communist Party (PKI). Thousands were jailed without trial and many were tortured and forced to confess their involvement with the PKI. The most notorious prison was on Buru Island, where hundreds of political prisoners (including prominent Indonesian author Pramoedya Ananta Toer) were incarcerated. The island's prison system is often compared to the Soviet Union's Gulag.

Before the 1965 killings, the PKI was the largest communist party outside the USSR and the People's Republic of China.

Fifty years on, the government continues to deny that the state was was responsible for summarily executing innocent civilians, insisting that communists were the first to attack army officials.

Rather than acknowledge the atrocities committed by the army, the government has instead decorated many high-ranking officers during this period as heroes. In fact, the government once again announced its plan to name Commander Sarwo Edhie Wibowo, who led an elite unit of the Indonesian Army in 1965-67, a national hero. (Wibowo is also the father of former first lady Kristiani Yudhoyono.)

The period between 1965 and 1966 was a dark moment in the modern history of Indonesia. When General Suharto came to power in 1967, he prohibited any investigation of the killings. Even when Suharto resigned in 1998, succeeding governments have rejected appeals to review the role of the military in the 1965 mass killings.

The International People's Tribunal 1965 in The Hague is the latest attempt by human rights groups to make the Indonesian government accountable for the killings.

Dr. Soe Tjen Marching, British coordinator of the IPT 1965 and founder of non-profit Yayasan Bhinneka Nusantara, wrote a Facebook post summarizing one of the IPT's sessions. She was deeply affected by the story of one survivor in particular:

Yesterday in the International Tribunal Hearing of '65 case, a woman witness (Rahayu) narrated how she was raped and sexually assaulted. I was assigned to be the note-taker but ended up needing to distance myself, and eventually I asked for a replacement. Not only because my carpal tunnel hurts, but also because I couldn't contain my emotions, listening to the cases of rape committed by Soeharto's soldiers.

There were also reports that customers of a state-owned Internet service provider in Indonesia couldn't access the IPT's website, while the hearings were being held.

Do you know that CGMI, an organization associated with the PKI wasn't a branch of PKI? Timeline: IPT 1965 in Den Haag.

Involved in 1965 hearings, IPT 1965 Advocate Todung Mulya Lubis is ready to be branded a traitor.

In Bali post 30 Sep 1965 was horrifying. Especially in 1966. People who are disputing over inheritance can defeat an enemy by calling him/her “a PKI”

Gareth Evans: The Indonesian massacre of 1965 is the least talked-about #genocide of the last century https://t.co/DyTBA5Ncxg

In Indonesia, describing the 1965 violence as genocide can invited unwanted attention from the government. Last month, police revoked a permit belonging to the Ubud Writers’ Festival, which was planning to tackle the truth about the 1965 killings.

Read New York Times' survey of the recent crackdown on freedom of expression around the 1965 Indonesian genocide! https://t.co/QFCxw3DC0w

Also last October, the editor of Lentera, a university student magazine, was summoned by the police for publishing an article about the history of the PKI in Salatiga, a small town in Central Java. The police also ordered the editor to retrieve the distributed copies of the magazine.

Government will not apologize for 1965 killings

Indonesian President Joko Widodo included reconciliation for the victims of human rights violations on his nine-point agenda (“Nawa Cita”), but seems to have backtracked on this commitment. Luhut Panjaitan, the coordinating minister for political, legal, and security affairs, said the government will focus on reconciliation, but it will not apologize for the communist purge.

Reacting to the IPT, Vice President Jusuf Kalla claimed that it has no political significance:

JK: No need for the government to apologize for the 1965 event.

Dr. Ken Setiawan, a fellow at University of Melbourne and daughter of one of the people detained in 1965, asked in an opinion article on the school's website if reconciliation is possible without an apology:

An apology, however, requires looking back, to acknowledge the past and admit the truth. This is a very important process, particularly considering the deeply painful experiences of victims and survivors. But acknowledging the past and the role played by the state in serious violations of human rights challenges dominant historical and political narratives, and that guarantees resistance.

It remains to be seen how the Jokowi government will navigate these challenges and how it will give meaning to its promise to establish justice.