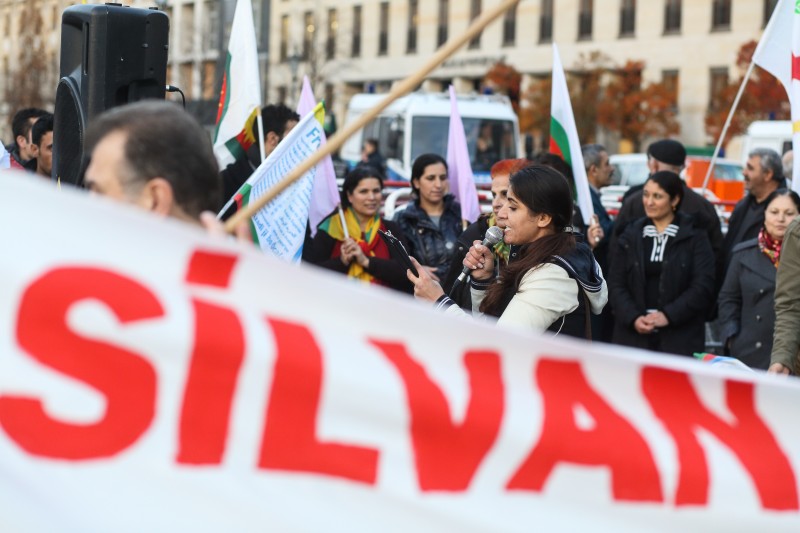 Berlin, Germany. 12th November 2015 — A woman gives a speech behind a banner remembering Silvan. — Dozens Kurds and Yazidi rally at Berlin's Brandenburg Gate to condemn Turkish attacks on and the siege of Kurdish Silvan in Turkey. They also remember the fate of the Yazidi in Iraq who are murdered and enslaved by the Islamic State (ISIS) . Demotix photo by Thomas Strasas.  ID: 9039057.

Pro-Kurdish internet users in Turkey are concerned the devastating blasts attributed to ISIS in Paris will undermine international media coverage of what they say is a daily campaign of terror being waged in eastern Turkey by the Turkish state.

For more than ten days before attacks in Paris left over 120 dead and France reeling, the city of Silvan has been under siege as government forces clash with militants from the independence-seeking Kurdistan Workers Party (PKK).

The #SilvanUnderAttack hashtag served as an instrument to mobilize the attentions of mainstream media during this period.

While expressing solidarity with Paris, many Twitter users are now using the hashtag in combination with #ParisUnderAttack to ensure their message is not drowned out in the pick and mix world of social media.

Our magnificent media, #ParisUnderAttack is unfortunately true, what about #SilvanUnderAttack?

After the Paris attack, Turkey has become completely alone in the region. Let's see what happens.

Thousands of residents have been forced to flee the city of Silvan in the Diyarbakir region of eastern Turkey amid a drawn-out government operation that has involved warplanes, helicopters and snipers. At least six civilians have been killed, according to the Human RIghts Foundation of Turkey, along with around a dozen militants and three soldiers in the Turkish army since the operation began on November 3.

That is in addition to over a hundred deaths as a result of terror blasts and other government operations since the first of two general elections held by Turkey this year in June.

Turkish Prime Minister Ahmet Davutoğlu has said the operation in the city with a catchment area of over 130,000 will continue “until not a single terrorist remains.” His government has also denied that the city is facing food, water and electricity shortages as schools and other crucial city infrastructure suffer from the fighting.

Ertuğrul Kürkçü, one of HDP's parliament members and a member of a delegation that visited Silvan November 12, called the operation “a war on people”:

There is a war being waged on people. People are being punished for rejecting [President Recep Tayyip] Erdoğan's regime, withstanding and resisting it.

Unable to re-secure its parliamentary majority in times of relative peace in June, the AKP (Justice and Development) party led by Davutoğlu and President Recep Tayyip Erdoğan wrested back control of Turkey's legislature at the second time of asking with a controversial electoral victory earlier this month.

Campaigning took place against a background of fear and repression of the media as Ankara's decades-old conflict with the PKK was reignited following the July Suruc bombing that claimed 33 lives and was claimed by ISIS.