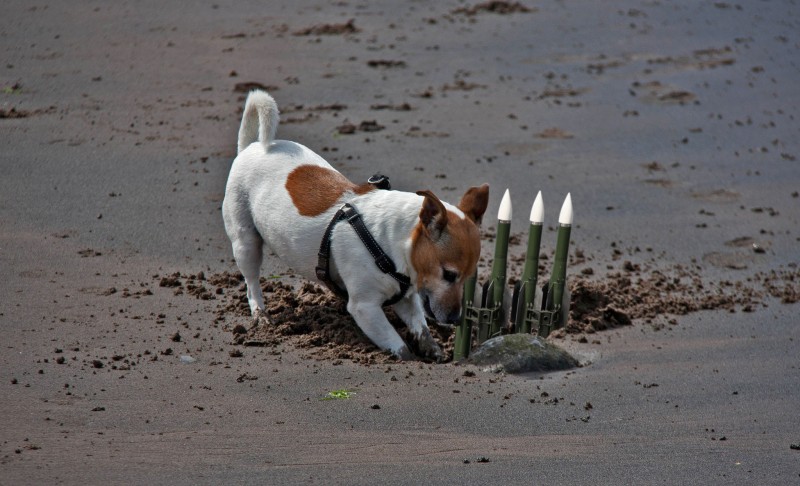 While a lot of open-source research on the RuNet is possible thanks to broad searches on Google, Vkontakte, Twitter, and other websites, sometimes it’s best to drill down to the narrowest sources available. This guide will instruct you on how to find local online communities on the Russian-language Internet. Oftentimes, eyewitness accounts, photographs, and videos that spread virally on the Internet originate in small, relatively unknown communities.

How do small groups make big waves on the Internet and in the media? Consider an example from September 2015, when a local online community for the Russian city of Novocherkassk garnered international attention after someone shared a photograph of a child being walked like a dog. 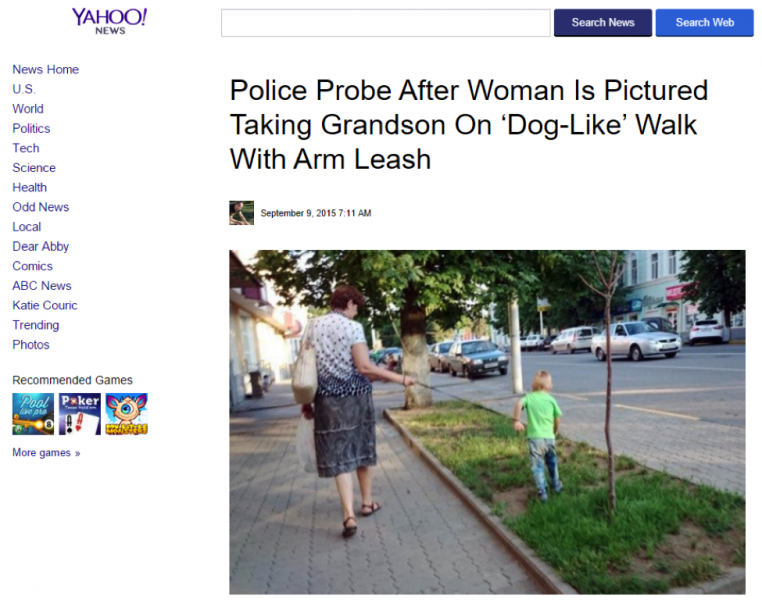 As we read the story, we see that the post was made in the “Overheard in Novocherkassk” group on the Russian social network Vkontakte:

Content that resonates online widely sometimes originates on such websites, and we as researchers can verify photographs and videos by tracking down the original source, or by investigating other claims through these pages.

For nearly every Russian and Ukrainian city and region, there is a local group on Vkontakte for residents to swap stories and chat. The two most popular groups are called “Подслушано в …” (“Overheard in…”) and “Типичный …” (“A Typical Day in…”). In the latter case, the word “typical” (типичный) may change endings to “типичная” or “типичное“, depending on the gender of the locality's name. A Google search, however, yields results for all spellings, regardless of the grammatical ending to the word in the community's name. Additionally, if these two methods do not produce useful results, you may try searching for the word “public” using the phrase: “паблик” + [city name].

Internet users primarily use these groups to chat with other locals or to find services available in town. Common queries you'll find in these communities are “Who can give me a ride to a neighboring town?” and “Does anyone know a good place to get my cell phone fixed?”

When news breaks in certain localities, however, these groups can transform into platforms for heated discussions. When war came to eastern Ukraine, some Vkontakte communities became digital spaces to talk about the conflict from local points of view. The topics in these groups include talk of troop movements, checking in on the safety of residents in certain apartment buildings, and sharing photographs and videos of the scenes from the conflict.

As you would imagine, these local groups can offer unique access to open-source information in the form of eyewitnesses and local reports. However, there are challenges, as these groups’ administrators often have strong political allegiances, particularly in conflict scenarios. In eastern Ukraine, for instance, many of the Vkontakte groups’ administrators sympathize with the pro-Russian separatists, leading to either outright censorship or self-censorship from locals who post in these groups.

You can find these local groups by searching the Internet for the words “Подслушано в” or “Типичный,” plus a city or region name. Providing the correct grammatical case of the word is not important, as websites like Google can bring relevant results for both “в Донецк” (to Donetsk) and “в Донецке” (in Donetsk), even if one is used incorrectly. The search results for “Подслушано в Донецке” reveal numerous groups, including mirrors for these communities hosted on LiveJournal and Ask.fm (where user-submitted questions are posted), as well as the addresses of the Vkontakte groups. 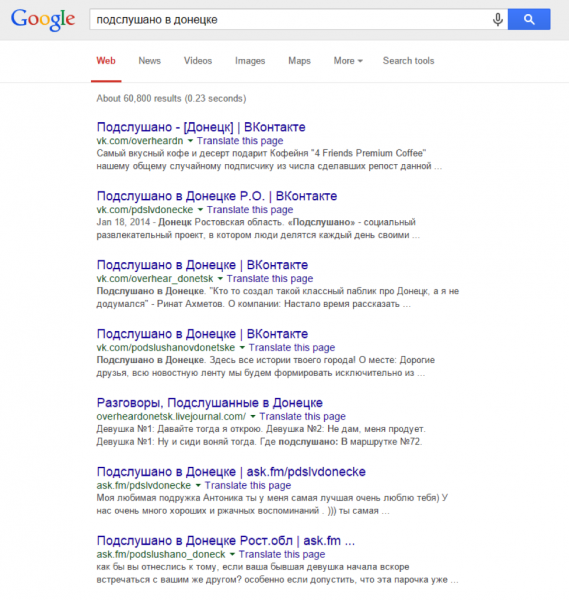 When you visit some groups, often there are thousands of posts, making it very difficult to find content published several months earlier. Thankfully, there is a quick way to find posts that are archived. First, click the link that lists how many posts there are in the group (see the red box below). 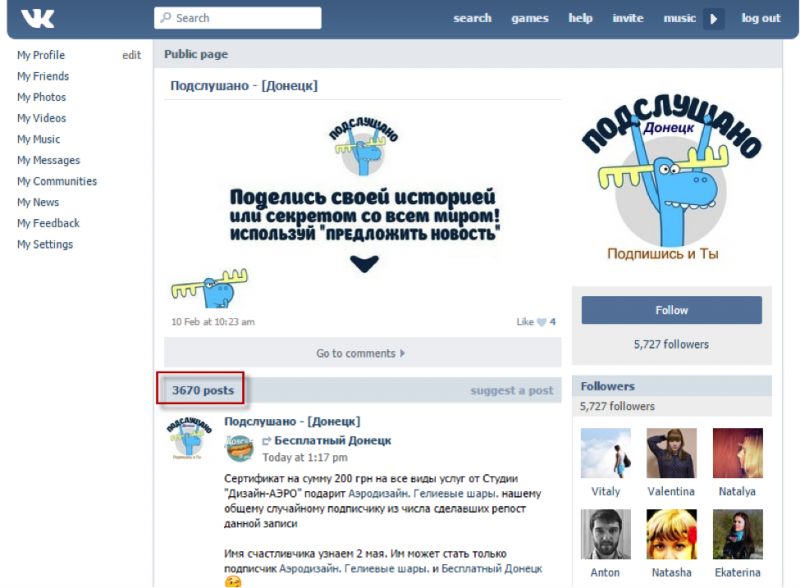 Scroll through a few pages of the group (see the new red box below), and notice the number next to “offset=” in the URL (highlighted in blue below). This number indicates the posts being displayed, with “1” being the most recent. There are 3,670 posts in the group displayed below, as indicated in the screenshot above, so we can determine the the chronology of posts based on that number. If you replace the number (120 below) with a larger number, you will be able to quickly navigate through old posts. It could take a while, but after entering a few numbers, you can find the correct period of time. For example, if you replace the number 120 above with 1680, then posts from July 17 and 18, 2014, will appear.

When Bellingcat [note to readers: the author of this guidebook is a contributor to Bellingcat] conducted research into the anti-aircraft system that shot down Malaysia Airlines Flight 17, the “Подслушано в Торезе” (Overheard in Torez) group provided essential information. Eyewitness reports of a military convoy moving through the cities of Torez and Snizhne were posted in this group on July 17, shortly before MH17 was shot down. 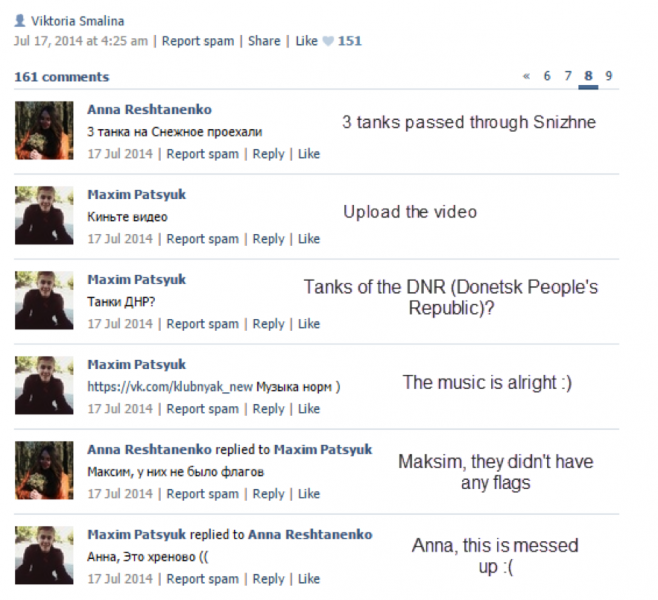 The screenshot above captures correspondence between two Vkontakte accounts that apprently belong to residents of Snizhne and Torez. They discuss how three tanks without flags passed through Snizhne at 1:14 p.m. (local time)—almost exactly three hours before MH17 was shot down near Snizhne. According to Ukrainian security services, a convoy of three tanks and two BTRs escorted the Buk system through Snizhne on July 17. Thus, we can use local communities to find eye witnesses who can verify—or refute—the official accounts of government officials.

Vkontakte is not the only online forum for local communities; there are several popular social networks and message boards for neighbors to meet and talk.

Many Russian Internet users turn to Odnoklassniki to organize discussion groups almost as often as thye use Vkontakte. With a simple Google search, you can find nearly every one of these groups without much trouble. Here is a search string that will identify numerous local groups on Odnoklassniki dedicated to the Russian city of Novosibirsk: 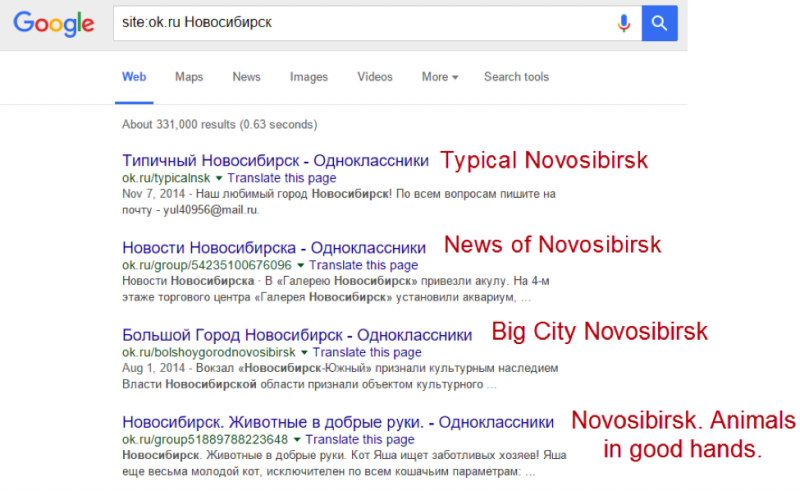 In some communities, public message boards and forums are still popular, though they are not nearly as widely used as groups on Vkontakte and Odnoklassniki. To find these less common communities, search the city name along with keywords that include the word “форум” (forum). In the search below, two unique message boards and two Vkontakte groups reveal the so-called “Kharkov Forum” (Харьков форум). The first result, Kharkov Forum, has hosted millions of messages over the past several years, addressing topics including politics, sports, and help for soldiers and wounded civilians in the war, and included local chatter about road conditions. 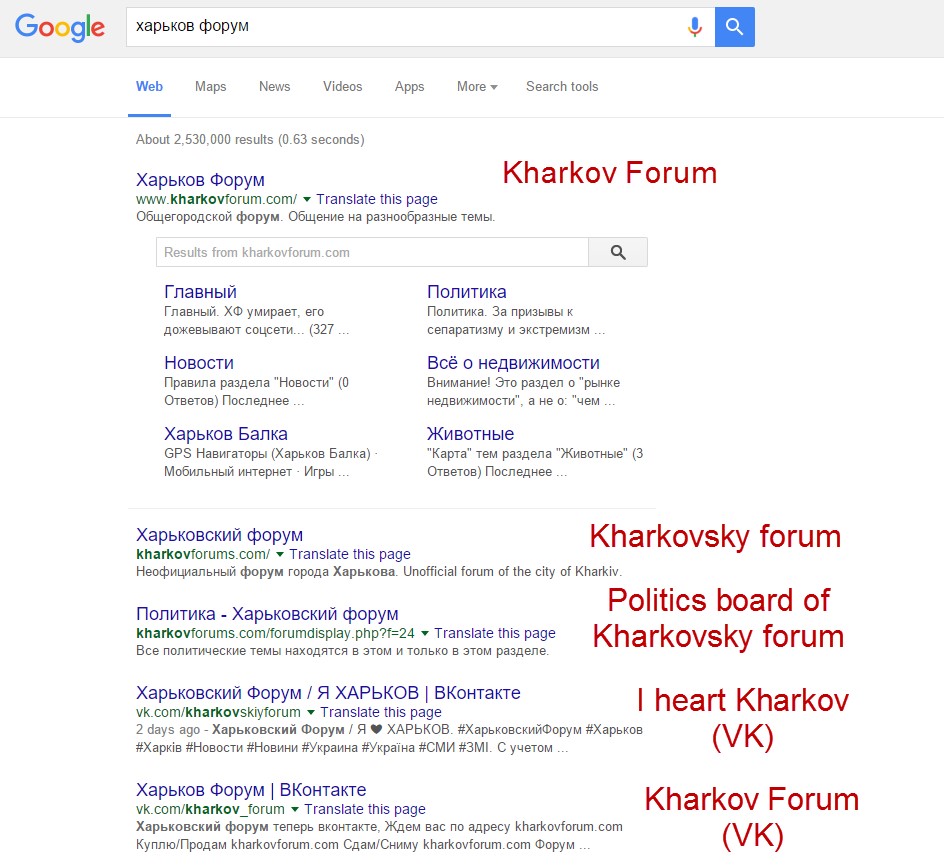 Additionally, in local communities, outside of the large public groups, there are often improvised communities set up during emergencies, designed to coordinate relief efforts. For example, during the devastating wildfires that swept across Siberia in April 2015, the “Volunteer Wildfire Firefighters of Zabaikalye” public Vkontakte group organized response efforts and distributed useful information to locals about avoiding the approaching forest fires. Additionally, locals wrote in this group to disseminate information and to organize volunteer and humanitarian efforts. 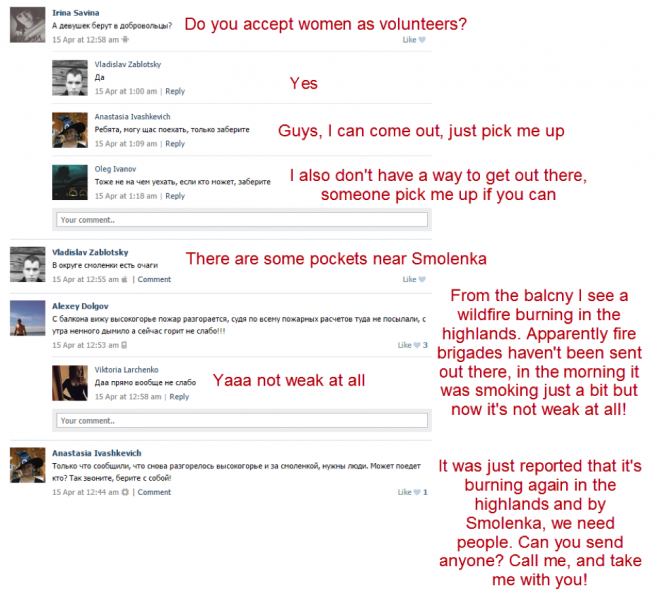 Researching the RuNet by broadly searching Google, Twitter, and Vkontakte searches can only get you so far. To get through to a more specific, localized stratum of information, you must be able to locate and navigate the groups described above. While much of the open-source research concerning Russia and Ukraine over the past 18 months has focused on the Ukrainian conflict, there are still seemingly endless pools of information on local networks for nearly any other topic of research, from wildfires to local oddities.