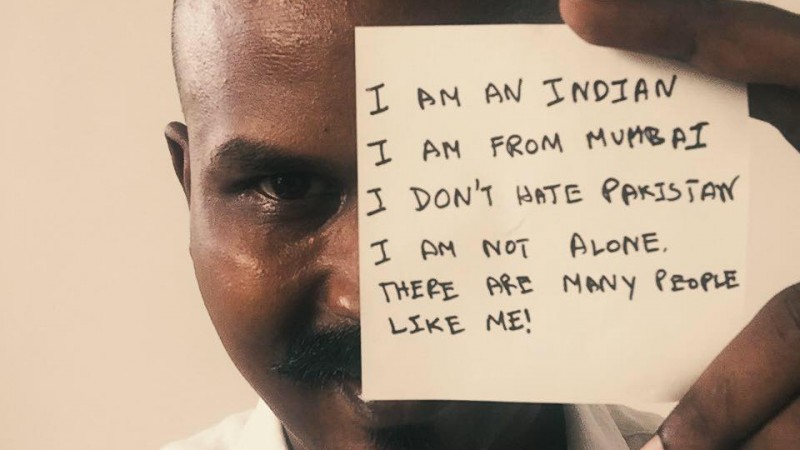 The relations between India and Pakistan are complex, traditionally characterized by rivalry and suspicion. However, every now and then you hear of initiatives to rekindle good relations at the personal level.

Recently, the hashtag #ProfileForPeace has trended both in India and Pakistan, where ordinary Indians and Pakistanis confront the hate with love.

The campaign was initiated by a tweet from Mumbai resident Ram Subramanian and has since gone viral:

The rocky relationship between India and Pakistan

We share a long border, similar food and culture. Pakistanis use a language, Urdu, which originated in an Indian court, Lucknow, and our histories were identical up to 1947. Indians have a strange feeling about Pakistan – most of us believe that we should drive all our Muslim citizens out of India and into Pakistan, and also that we should conquer Pakistan and undo the partition.

Because of Pakistan, India has a seize within. We remain a country in fear. We always see the world conspiring against us.

In 1947, India was partitioned by its British rulers into the Dominion of Pakistan (later Islamic Republic of Pakistan and People's Republic of Bangladesh) and the Union of India (later Republic of India) primarily along religious lines as an answer to tensions between the Hindu and Muslim communities. The partition forced people on both sides to migrate, and in some places riots and violence erupted. The trauma still looms large over today's India and Pakistan, and the relationship between the two remains delicate.

Maria Syed, a PhD scholar at the Centre for Arab and Islamic Studies at the Australian National University, talked about the war of words between the two countries in a piece for the Asia and the Pacific Policy Society:

Inflammatory statements from both sides have added fuel to the fire. India’s public pronouncements have highlighted its desire to push around its neighbour while Pakistan has responded by reminding the former of its nuclear credentials. A mutual blame game and finger-pointing exercise goes on unabatedly as neither side admits to provoking aggression on the border.

‘I am not alone, there are many people like me’

Subramanian said in an interview with Times of India about the impetus of such campaign:

It had been brewing in my head ever since I heard of a series of bans and attacks. Most of us common blokes don't feel such hate nor want these fights. And when you close the doors to art you open up a door for dark and unwanted things to come in.

And people from India and Pakistan chimed in:

I don't hate Pakistan and there are many more like me! #ProfileForPeace pic.twitter.com/BE5QM62SgY

Happy Diwali💞💞💞I'm a Pakistani and i don't hate India, I'm not alone there are more like me.. #profileforpeace #HappyDiwali

I am a Pakistani. I do not hate Indians. I am not alone, there are many people like me #profileforpeace #indianflag pic.twitter.com/gyPMhVd5va

Participants had high hopes for love and reconciliation:

Let us learn to support good causes for a positive outcome. Instead of just indulging in rivalry. #ProfileForPeace

#ProfileForPeace initiative is a major defeat for Pakistani, Indian media and right wing forces on both sides of the border

Hundreds & thousands of tweets frm across d globe, every hour proves there is more #Love on our planet, go for it! pic.twitter.com/oc7byF0xsl

According to Twitter analytics site Topsy, more than 12,000 tweets were sent using the hashtag. That's not much, considering the number of Twitter users in both the countries, but it is a start.

In this YouTube video, Subramanian speaks about this campaign:

A commenter on an article in Pakistani news site Dawn about the hashtag wished that those in power would listen:

Does it make difference to the hawks out there…No… people and place don't hate until told to do so and the hawks know the job….

Economically and socially Pakistan for sure and India may as well cannot afford a short or long war… not in the budget,..

I love the peace campaign…. But I hate the politics of hate from both side… But it is commendable initiative taken by the civil society of both countries. Let peace be spread everywhere…Long Live Peace…Long live peace lover of both countries….

And despite many initiatives like this before, success seems to be momentary as new rivalries at the political or personal level start again: