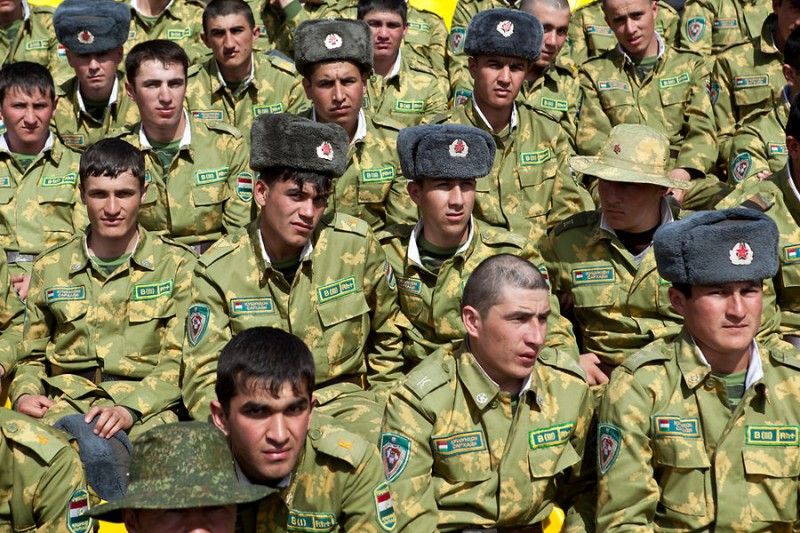 Conscripts watch a wrestling match in Tajikistan. Photo by Eurasianet and David Trilling, Used with permission.

The murder earlier this week of two recruitment officers in Tajikistan's capital Dushanbe is being viewed by local internet users as a consequence of oblava — the kidnapping of young conscripts of military age.

On November 9 a conflict took place between unknown assailants and four recruitment officers in Dushanbe. For reasons not disclosed by officials, the suspects stabbed the officers and their driver, resulting in two deaths.

Global Voices has written on the oblava phenomenon here, here and here. For many young Tajik men, the question of how to avoid compulsory military service is among the most salient they will ever face. Tajikistan's army offers recruits notoriously poor conditions, while exposing them to everyday hazing at the hands of older soldiers.

According to the statistics quoted by BBC in 2013, at least 40% of new conscripts in Tajikistan arrive at service in the army through the practice of kidnappings.

Tajik authorities have denied the deaths of the recruitment officers are an act of reprisal or self-defence by recruitment targets, citing the fact that the recruitment plan had been completed in Dushanbe on schedule for the first time since independence.

But few are convinced by their explanation.

Firstly, admitting the link between oblava and the deaths would imply that official structures use kidnappings in a systematic way to sustain a desperately underfunded and unpopular military.

Moreover, the threat of being forced to serve in the Tajik army is also an effective mechanism to sustain poorly-paid employees.

One commenter under an article about the incident on the local outlet Asia Plus hinted the recruitment officers that got attacked were doing just this:

November 1 was officially declared the end of the autumn recruitment drive, but these guys decided to improve their financial situation. Alas, they caught the wrong types. I am sure that our recruitment officers and the defense ministry will now think about their health and lives before taking such risks for just a few hundred somoni [local currency].

While a reader using the nickname MMY ventured:

It seems like oblava, that`s why the teenagers beat them up and ran away. I think they did the right thing because they shouldn`t chase guys and force them into serving in army where they turn them into handicapped people or even kill them there.

This last point is not an exaggeration.

Last year a military officer was sentenced to nine years by a Tajik court for beating a conscript to death. While the trial was seen as a potential landmark judgement, directing public attention towards violence in the army, reports of severe beatings remain widespread.

As another reader of the Asia Plus service wrote:

I personally regret that the recruitment officers got injured and even killed! Those who did it definitely should be held accountable before the law! From the other side, this is the echo of the system that has been working for more than 20 years during recruitment periods in Tajikistan. I hope this mournful incident will become a reason for recruitment officers to restrain themselves from using the “business of oblava.”

So far the Ministry of Internal Affairs has said it is willing to give $10,000 dollars as a reward to anyone that has information about the suspects’ whereabouts.