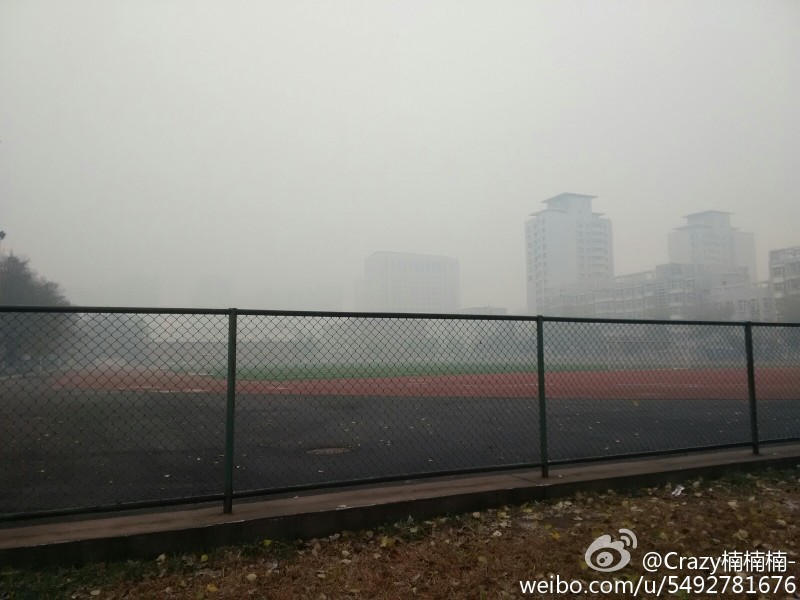 Liaoning is one of China's first industrial provinces. A merger of two provinces, Liaodong and Liaoxi, as well as five municipalities, the area has been fighting an economic slump. More recently, Liaoning has also confronted what's being called an “airpocalypse” of polluted air.

Since November 5, hazardous smoke has shrouded many of Liaoning's cities, including its capital, Shenyang, where air quality set a new record low on November 8, testing 130 times above levels considered safe by the World Health Organization (WHO).

Shenyang's air registered at PM2.5 index with the maximum figure 1326 μg/m3 on November 8. PM2.5 are particles smaller than 2.5 micrometers. In some districts of the city, the index was recorded as high as 1400 μg/m3. These pollutants can stay in the air for days or weeks and travel into human respiratory system, causing lung disease, emphysema, lung cancer, or premature death in individuals with existing heart or lung diseases. According to WHO's air quality guidelines, the air is considered hazardous when PM 2.5 is present in the air at 301-500 μg/m3 level.

Environmental experts suspect an increased burning of coal, straw and other materials for heat is partly causing the rising air pollution. As a result, Shenyang's Environmental Bureau has implemented its emergency response plan for the first time ever. 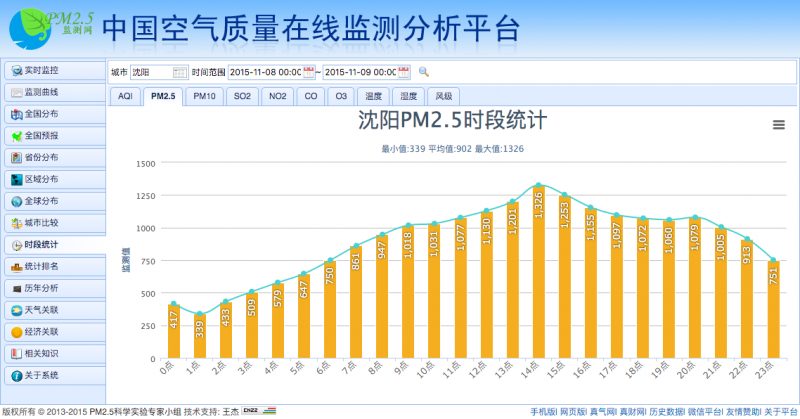 Screenshot: PM2.5 reading of Shenyang on November 8 from Aqistudy.cn, an air-quality monitor website.

The official emergency plan for heavy air pollution requires the temporary suspension of outdoor construction work and limiting the number of vehicles on the road, but a journalist from the news agency Xinhua found a construction site still running. The city's traffic department has also resisted limits on automobile traffic.

Growing increasingly annoyed, many in the public and the media are calling into question the effectiveness of the city's emergency plan.

The plan appears to solve every potential issue, but what about its operability? What about communication between official departments? In cases of severe pollution, if residents know little about the situation and come to learn about pollution levels and protection measures through rumors, the plan becomes useless. If communication channels [between official departments] hit a bottleneck and instructions can't be distributed or implemented, the issue would not be easy to resolve.

Some high schools continued instruction, also violating the city's emergency protocol. Instead of halting all classes, one school, for instance, merely told students to stop all activities outdoors. A student at the school reposted the administration's message, expressed her disappointment on China's microblogging service Weibo:

As a senior high school student in Shenyang, I was quite disappointed with the education department, after receiving this message.

Notice: Tomorrow Shenyang’s weather will be at Level 2. According to orders from the state, our students should suspend all outdoor activities, close windows, wear masks when coming to and leaving from the school, and take relevant measures to prevent injury. The school will halt all large-scale outdoor activities. We hope this notice has been delivered to all the students and teachers. [Signed] Administrator of the Managerial Office to No. 28 Middle School, November 8.

Another high school student criticized the Environment and Education Department:

There's severe pollution in Shenyang, so why hasn't the Environment and Education Department halted school instruction? This neglects students’ health and safety concerns, affecting students and faculty alike. I can't understand it. When smoke like this comes to Beijing and Shanghai, they'll halt all teaching. But here in Shenyang, it's just the outdoor activities that go. Do they want to endanger students’ health?

The suffocating smoke in Shenyang is a harsh reminder of the consequences of China's coal consumption, which reached 4.12 billion tons a year in 2012.

For northeastern areas of China, burning coal has long been the main way of supplying warmth. Last winter in Shenyang, almost 18 million tons of coal were fueled for supplying warmth to city residents. It was in this one season that the city managed 60 percent of its coal consumption in a year.

Early this year, the Shenyang government resolved to convert from a coal-based to power-based mode for heating in the coming future. This strategy is designed to lower the city's coal consumption per square meter from nearly 35kg to 22kg.

In China's 13th Five-Year Plan, the country's central government vowed to lower dependence on fossil energy and promote the development of clear energy. China has seen resolutions like this before, however, and a revolution in air quality still seems many years away.