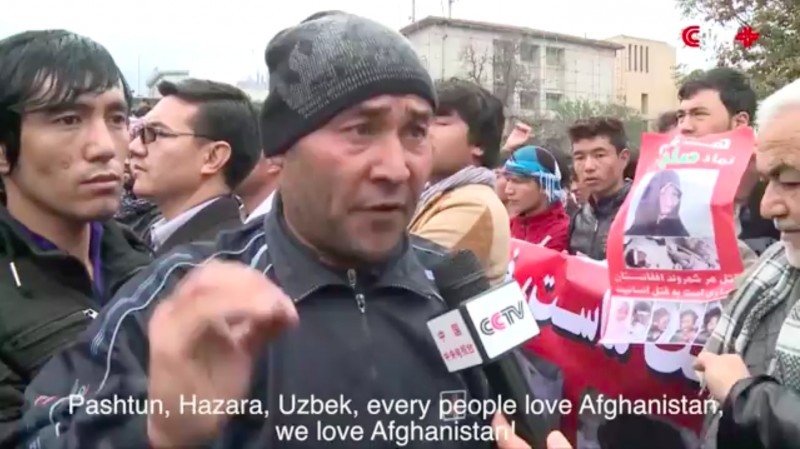 CCTV coverage of the protests. Image is a screenshot from CCTV's official You Tube Channel.

Thousands of people thronged in Kabul in a huge, unprecedented public stand against violence and insecurity in Afghanistan this week.

The protest triggered by the executions of seven ethnic Hazara at the hands of militants supposedly linked to ISIS was an enormous show of civic strength. It was also a wake-up call to President Ashraf Ghani's chronically weak government, which has watched the country unravel even further since it came to power last year.

The November 11 demonstration was led by ethnic Hazaras, historically one of Afghanistan's most marginalised and persecuted groups, but it soon crossed ethnic lines, drawing in Tajiks, Pashtuns, Uzbeks and Sikhs.

Carried by the protesters were the coffins of the seven Hazaras, all allegedly beheaded by loyalists of ISIS, a brutal Al Qaeda offshoot that has come to control swathes of Syria and Iraq, but maintains a presence in Afghanistan, too.

Four of those abducted from Ghazni province and killed were men, two were women, while one was a nine-year-old girl, whose image has been adopted on hundreds of Afghan Facebook profiles.

The violent deaths of the Hazaras quickly came to symbolise the increasingly brutal violence Ghani's government seems unable to stem, only weeks after the public stoning of a 19-year-old woman, Rokhshana, in Ghor province.

The protests stirred on November 10, when hundreds of civil society activists, people and students gathered in Park-e Zarnigar*, a park in central Kabul only five minutes walk from the ARG house of government.

A tent has been pitched in the park since February, when 31 Hazaras were abducted in a separate kidnapping, also alleged to have been carried out by ISIS.

The tent was originally pitched to call for government accountability following the first kidnapping, but government largely ignored its existence. Only Abdullah Abdullah, CEO of the National Unity Government, visited it last week, and his vague promises failed to satisfy the protesters.

While they gathered there, the relatives of the dead were carrying the beheaded corpses of their loved ones to Kabul in coffins.

The government had tried to dissuade the people from moving towards Kabul with the corpses, but they reached the capital on nightfall of November 10, accompanied by more than 300 cars. Thousands of people, almost all Hazaras to begin with, received them in Dasht-e Barchi, a Hazara ghetto in western Kabul woefully neglected by the state. 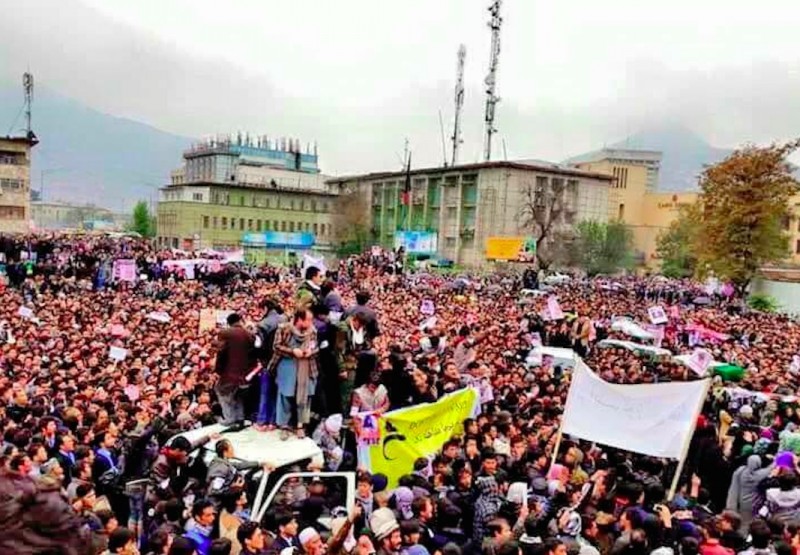 Photo of protest taken from Facebook user Abdullatif Dianatmadari and used with permission.

Some say the crescendo of the protests, when all protesters converged at the ARG, marked the biggest anti-government protest Afghanistan has witnessed in decades.

Kabul demonstration also defied the decaying Jihad era leaders, 4 them a dignified transition to irrelevance should be designed. NEW AFGH.

The government's response was weak and irresponsible. President Ghani spoke in broad agreement with the demands of protesters for less violence via state-run TV, while Mohammad Mohaqiq, who positions himself as a Hazara politician in the National Unity Government’s power-sharing arrangement, equated the protesters with street wanderers called to protest by “political losers”.

Thousands of demonstrators who had waited for the government to come out until midnight left the ARG’s southern gate angry and with tears in their eyes after Mohaqiq’s words.

Protesters may've achieved something big in demanding discussions with gov happen on TV. Mohaqiq really cracked under pressure. So did Ghani

Eventually the corpses were carried back to Dasht-e Barchi, with thousands of protesters accompanying them, angry but undeterred. This was not the end of a movement, but the beginning of one, with strong and legitimate demands for a safer Afghanistan.

*In Park-e Zarnigar is buried Abur Rahman Khan, King of Afghanistan (1880-1901) from whose reign the persecution of Hazaras started. He is believed to have killed around 60% percent of Hazara population in Afghanistan at the time.