Trinidad and Tobago’s Crime-Solving Facebook Users Are Back, and So Is the Controversy of Policing Domestic Violence 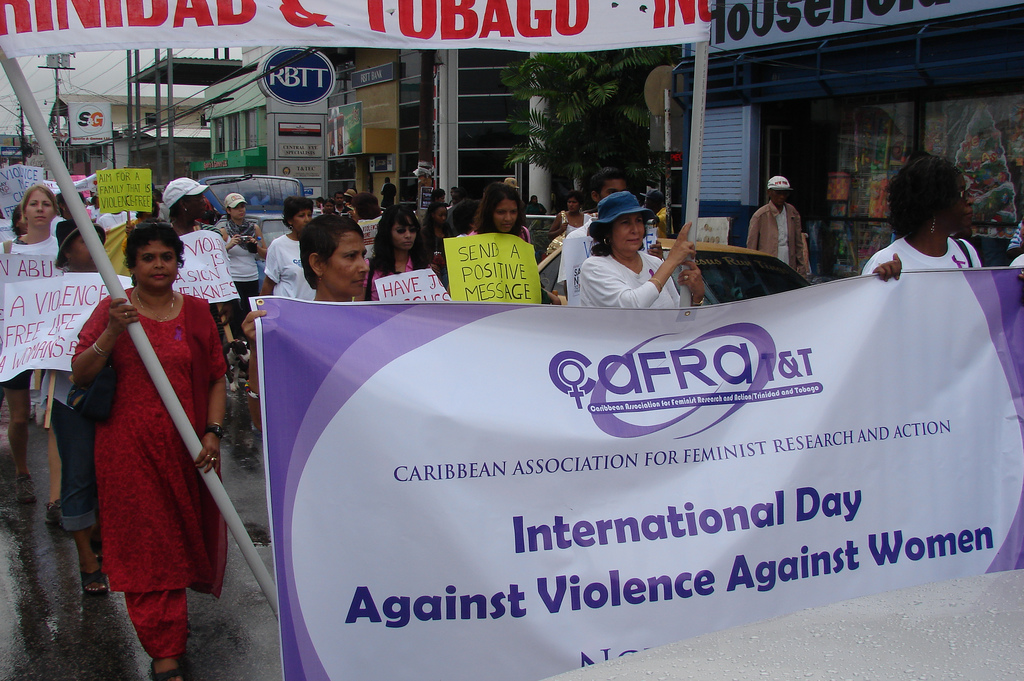 Walk against domestic violence and commemoration of International Day for the Elimination of Violence Against Women by the Caribbean Association for Feminist Research and Action, Trinidad and Tobago, November 2008. Photo by CWGL, CC 2.0.

They were at it again last week, on Friday, November 6, 2015. Back in action were the crime-solving citizens of what has become known as the ‘Facebook Division’ of Trinidad and Tobago's police force — netizens who circulate footage of abuse caught on video, until it goes viral and someone comes forward with information that helps identify any perpetrators.

This time, the video in question depicted a man severely beating a woman (allegedly with a steel pipe) at a bar in east Trinidad. Reports have confirmed that the couple have a child together.

Police acted quickly, but they were initially stymied by the fact that the woman refused to give a statement about the incident. In Trinidad and Tobago, convictions in domestic violence charges can be very difficult to achieve: police can generally only press charges if the victim goes on record about having been abused, or if a doctor can prove (usually through medical notes) that the victim admitted to being beaten. When cases do reach the courts, it's not unusual for victims to undermine the process out of fear of retaliation by their abusers.

Diaspora blogger Jumbie's Watch was not impressed with the police response to this incident:

I observed with great alarm the police inaction in the case of a woman beaten in a bar, kicked until she was sent skating across the floor like a busted football.

The police are saying that they cannot charge the perpetrator under the Domestic Violence Act if the victim is not making a complaint. That may be true under the Domestic Violence Act […] However, I looked at the Summary Offences Act, and it clearly states that ‘a complaint can be laid by or on behalf of the person aggrieved'… In other words, a complaint can be made by the police officer or other any other person, if the victim is not willing.

There is a lesson the police need to learn. Don’t be so myopic to look at a single view when it comes to the law. Just because a situation smacks of domestic violence does not mean you can’t be ‘creative’ within the law and charge the offender under other statutes.

But the police did just that. Because there were several eyewitnesses and video evidence of the beating, the offender, Ricardo Jerome, was taken to court to face charges of assault, possession of a weapon, and disorderly conduct. Jerome pleaded ‘not guilty’ on all counts.

“If a crime happens in Trinidad and Tobago and no one films it, did it happen at all?”

Despite the fact that Jerome was charged, netizens are still sceptical. Square Peg (Round Hole) quipped:

If a crime happens in Trinidad and Tobago and no one films it, did it happen at all?
I’ve had occasion to ask myself this question several times over the last few weeks as viral video after viral video emerged to prompt the police into uncharacteristically swift action.

Then came the video of the woman being brutally beaten by a man in an Arima bar.

As with all the other videos, this one spread like wildfire on Facebook, autoplaying all over my newsfeed and prompting the requisite outrage. Folks were understandably appalled at the sight of this man throwing a woman to the floor, kicking her and beating her with a metal object. They wanted him found and they wanted justice for that poor woman.

At least, most of them seemed to. Some of them were already laying odds that she wouldn’t cooperate with the investigation, that she’d go right back to her abuser, that this was all sound and fury signifying nothing.

“It is ridiculous to put the burden on a victim who is often unable to shoulder it,” the blogger wrote, adding:

This has to change, and not just in the legal sense. The problem here is incredibly pervasive and deeply embedded in our society. This is a place where women are often still treated as the property of their partners, expected to conform to patriarchal norms and often blamed for the crimes perpetrated against them. Just take a look at the backlash against the woman now that she has refused to cooperate.

The vitriol directed against the victim of this attack has been tremendous, and it's come from some unexpected sources, including Ricardo Jerome's defence attorney, who called the situation “a storm in a teacup”, raising the ire of many netizens. Jacqueline Scott wrote on Facebook:

I understand lawyers have to do their job and defend their clients but to call this a storm in a teacup?? I've read many of the comments that people have made via social media. I am horrified at the scale of disdain and abuse directed at that woman being beaten…….
She like it so.
she must like the weave and fake nails he giving her.
Why she doh leave?
She look for dat, she horn him.
This video and many of the others shown on social media recently, give us a tiny view into the violent society that we have become.
When did it become ok to kick and beat another human being? I have no interest in what this woman has done.
We are breeding angry, violent people and when a lawyer can go on record making light of such a horrific video…..we are fast becoming a society that is lost.

Man's comment on wife beating case:
“But den again, yuh have to see de odder side. Yuh eh know what she do!”
Because of course – the beating might have been justified!
‪#‎thekindofthingthatgivesasininityabadname

Fellow Facebook user Rhoda Bharath noted that “women in domestic situations here have very little recourse under our laws; and even less protection by state services”—a sentiment that was echoed by both an employee of a women and children's rights organisation and the blog Square Peg (Round Hole), which said:

It’s easy to watch that video and ask how she could take it, but what we should be asking is, where could she go? Where are the shelters that take a woman and her child in and protect them from her abuser? Where are the legal advocates to ensure that she doesn’t lose custody of her child to him if he should decide to fight? Where is the counselling to help her see that what she is living through isn’t love?

Most of all, where are the laws that allow the police officers to do their jobs? They have all the evidence they could want of the beating and still, without a statement from a woman likely terrified of reprisal from her abuser, they can do nothing about it until the beating that finally kills her. At that point, we’ll all shake our heads and murmur about how she should have left when she had the chance.

In the meantime, we engage in yet another round of victim-blaming (‘she mus-see like it so’) and equivocation (‘what happens between two consenting adults…’) and abusers nationwide feel even more emboldened to batter their victims wherever and whenever. Because, no matter how badly they’re beaten, they’re not victims unless they can stand up and say so.