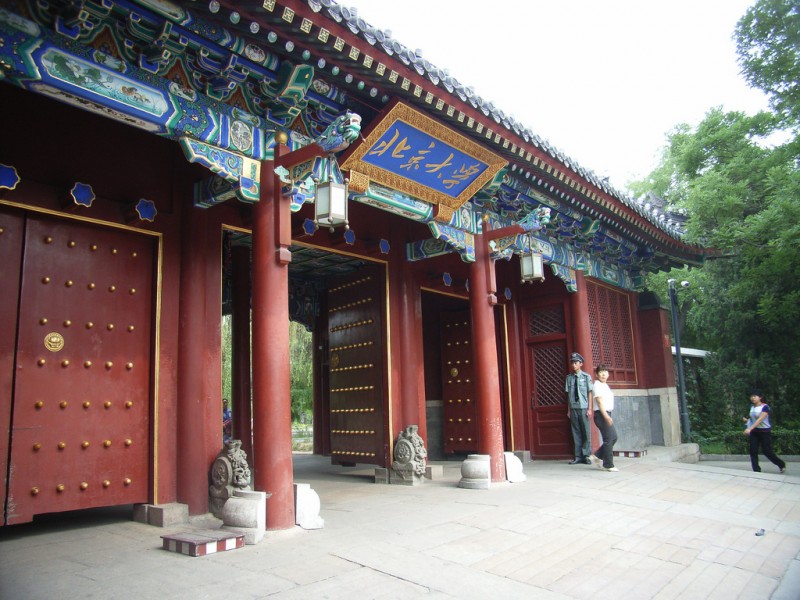 In China, it is quite common to see a flock of tourists taking “selfies” in front of the gate of well-known universities. To them, it's almost like a pilgrimage, a precious chance to associate themselves with one of nation’s most famous institutions of higher learning.

The enormous number of visitors has compelled some universities to impose limits on tourists during the summer holiday. Xiamen University, a leading Chinese university, is one of them, and it found itself in the spotlight after a recent visit by veteran Chinese columnist Jia Jia, who ended up literally climbing over the university's wall to gain access.

Jia stoked debate about the openness of Chinese universities, which further evolved into discussion on university reform in a response to a document issued by China’s State Council, vowing to build a group of world-class universities by 2020.

At the gate of Xiamen University, Jia was barred from entering because of the limitations on the number of daily tourists. He was then ushered over to a nearby fence by a 60-year-old nanny, who told him that he could spend 20 yuan to cross the fence with a ladder:

I was climbing the ladder while thinking, I’ve been to hundreds of domestic and foreign universities, but this is the first I've had to use the “illegal” method of climbing over the wall to enter a university, and a first-class Chinese one at that.

Jia described the management of domestic universities as resembling concentration camps, which goes against the values of openness that a university should stand for:

Many of our universities are highly fenced and strictly guarded. Students and lecturers need to be verified before entry into the campus, but off-campus people are banned or have to register their ID card number to get access. This managerial style, like a concentration camp, was imposed when SARS began spreading throughout Beijing and has continued to present day. Certainly I’ve known that some famous universities, especially Peking, Wuhan and Xiamen universities, have the picturesque scenery, but non-affiliated people consider campuses to be parks. These acts have plagued management and professors at some level, but is this the only way to limit daily tourists?

Not everyone agreed with Jia. One netizen believed visitor management is a necessary measure:

[You] should take a look at how squeezed Xiamen University is during the holiday: too many tourists occupy the cafeteria where students cannot eat; tourists sometimes interrupt students’ self-study, classes or noontime nap. This article did not take into consideration the students or the university at all. Bullshit! The university being open is okay, but it has no choice but to limit so many tourists. Last summer I went to Xiamen University where I spent over 10 minutes verifying my ID card to enter, but I understand and support the measure.

‘The truth is borderless’

Jia's experience climbing over the wall is very much a satirical allegory of the “closed door” policy of Chinese universities. What worried Jia was the Chinese government's stress on the development of domestic universities with Chinese characteristics, which is the guiding principle of the State Council document promising to build a group of world-class universities by 2020:

Under the current education system, universities in China are under the dual power structure of an administration managed by the school president, who is led by the Chinese Communist Party secretary. The bureaucracy is huge, which oftentimes interferes with academic development.

In a recent interview with party mouthpiece People’s Daily on the challenge of education reform to make local universities meet “world-class” standards as set by the newly released government document, Wang Feng, director of the research office for the educational system reform to the Ministry of Education, presented two cruxes of reform:

There are two issues of administration in higher education: First, the government sees universities as its subordinate departments, and regulates universities according to administrative regulations, so universities cannot develop in their own ways. Second, universities use the management of bureaucratic administrative institutes, and have to submit to the higher authorities for examination and approval, which go against the nature of academic development.

Jia believed that education reform should get back to the very basics of the spirit of university:

In the wake of centenary celebration of Peking University, other universities such as Nanjing University, Fudan University, Lanzhou University and Tsinghua University all celebrated their centenary. During the past ten years, the spirit of university was discussed nationwide. [Some people] focus on earning academic titles, some focus on building websites that provide university ranking service. But there is something unclear—why is there a huge gap between our universities and world-class ones? In other words, it never being clear–how on earth to develop an university? Put aside those unspoken political factors, there is a large space for reform in Chinese universities.