‘How Can We Believe Tomorrow It Is Not Our Turn?': Outrage Over 19-Year-Old Afghan Woman's Stoning 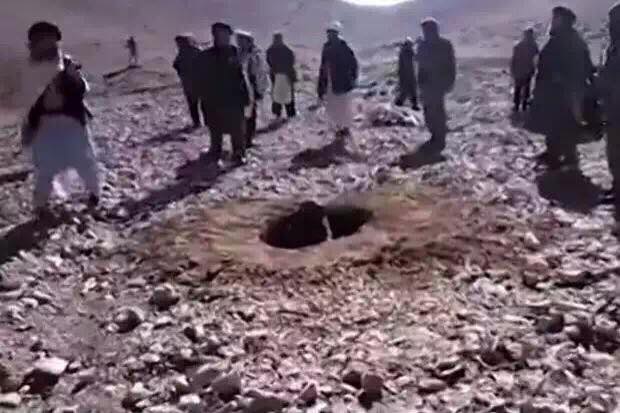 A screenshot from the RFE/RL video showing a young woman being stoned to death.

In late October a 19-year-old Afghan woman was stoned to death in Firozkoh, capital of Ghor province, after she was accused of adultery. A short video, obtained by Radio Free Europe, shows the young woman identified as Rokhshana buried up to her neck and screaming while men are hurling stones at her chanting: “There is no God except Allah.” (Footage extremely disturbing)

“Rokhshana was forced to marry an old man against her will, and she was stoned after she was caught eloping with another man in Ghor province,” Ghor's provincial police chief General Mustafa told Tolo News after the October 25 stoning.

Provincial Governor Seema Joyenda — one of the only two female governors in Afghanistan — said that Rokhshana’s family had married her off against her will.

“The man eloping with her is punished in a very lenient way and is fine without any harm,” she said. “This is not the first incident in this area and it will not be the last one.”

The stoning to death of 19 year old Afghan girl Rokhshana is a reminder of the old Afghan proverb “Women are made for homes or for graves”.

A local official, Mohammad Zaman Azimi blamed the Taliban, who control the village where the stoning took place, for the incident.

A local newspaper called 8am claimed that the order of Rokhshana’s stoning was issued by a cleric, Mullah Yosuf, who asked her to marry his brother many times despite her consistently refusing.

Abdul Hai Khatibi, the provincial governor's spokesman, said Rokhshana’s rejection of Yosuf's brother was the direct cause of the stoning.

According to research compiled by 8am, Rokhshana was a pretty woman and had only studied up to grade six. It was her second time running away from home because of an arranged marriage.

The first time she ran away with a man she liked, Muhammad Nabi, a few months after she was forced by her family to marry a local rich man.

However, they had no option except to return back to the village after her husband's family threatened Nabi's family and took them as hostages. When she came back, her husband was no longer interested in marrying her and instead married Nabi's sister.

Rokhshana's dark times continued. A 55-year-old man offered her father a huge amount of money to marry her. Even though she refused and warned her father that she would run away again, he accepted the offer.

She carried out her threat, this time escaping with Gul Mohammad, son of a powerful man in the village. While Rokhshana was stoned to death, Gul received the lesser punishment of 100 lashes and was sent home.

President Ashraf Ghani called the stoning non-Islamic and criminal, and ordered a thorough investigation of the incident. 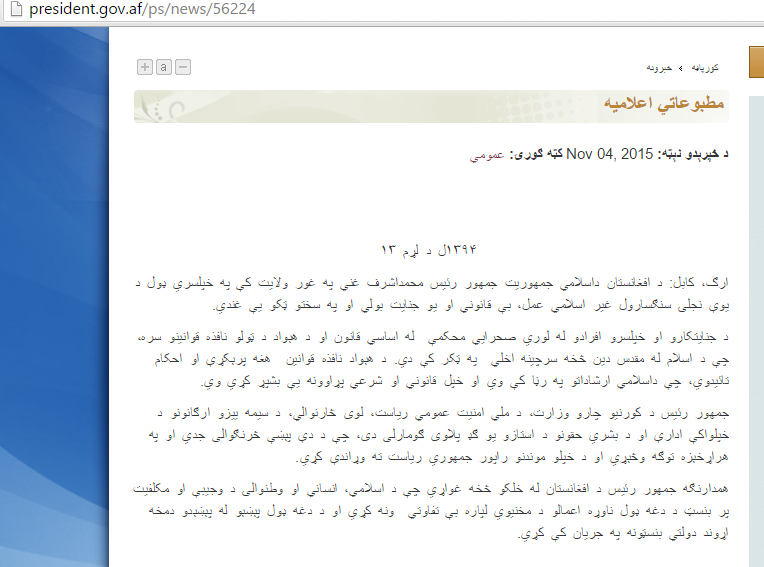 The president's statement ordering an investigation into the stoning.

Parliamentarians also condemned the incident. Fawzia Koofi, a female representative from Badakhshan, who in 2014 unsuccessfully tried to run for president said: “Since the beginning of the new government, this is the second most horrible crime in human history.” Earlier in March, a young woman — Farkhunda — was beaten to death and then burned by angry mobs in Kabul — following a false accusation that she burned the Quran.

The two minute-long video — most likely captured by an eyewitness’s cellphone — led to a surge of criticism on social media.

The incident sparked indignation against passive politicians as well as religious hardliners.

A Facebook user commented under a video in which parliamentarians condemned the stoning:

You useless politicians just keep talking as always. Shame on you all.

Afghan social media users compared the lives of two Afghan females in protest at new lows for gender-related violence in the post-Taliban era. 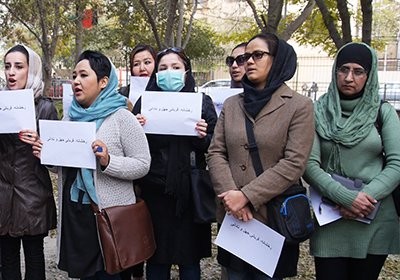 A number of women activists stood up to seek justice for Rokhshana. On November 6, they released a statement in which they asked the government for a serious investigation, identifying those who decreed the stoning.

Many, however, see these actions as ineffective.

The cases of Farkhunda and Rokhshana have caused many Afghan women to doubt if their lives, let alone liberties can be guaranteed in Afghanistan.

This girl #Rokhshana was stonned in #Afghanistan. How can we believe tommorow is not our turn? pic.twitter.com/a6R4hbJULN

How on earth can someone pick up a stone and throw it at a woman half buried in the ground? How can you live with yourself after doing that?

The Afghan penal code does not provide for stoning. However, in 2013, some religious hardliners in the lower house tried to legitimate it.

Luckily for Afghan women, international pressure forced then-President Hamid Karzai to reject the proposal and replace the provision with a ‘prolonged detention’ to punish adultery.