Why Is Taiwan President Ma Ying-Jeou Ending His Presidency With a Cross-Strait Summit? 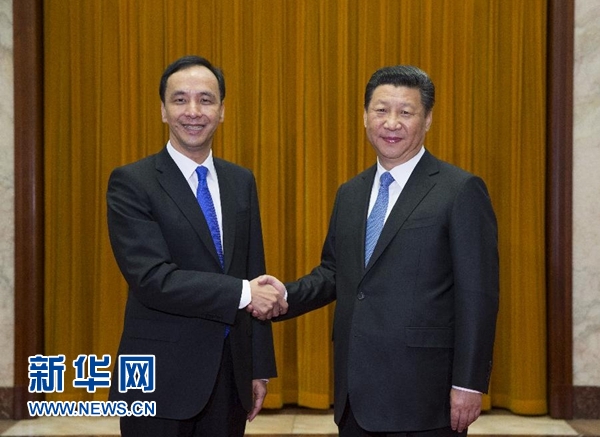 This article is written by New Bloom writer Brian Hioe, a M.A. student at Columbia University and freelance writer on politics and social activism. The original post, titled “The Beginning of the Ma-Xi Endgame? Calls For Action by Civil Society in Response to Planned Ma-Xi Summit“, was published on News Bloom on November 4 and is republished on Global Voices in accordance with a content partnership agreement.

“It feels like this is the beginning of the end,” someone commented to me after hearing of the Ma-Xi Summit scheduled to happen in Singapore on November 7th.

The eleventh-hour meeting between Chinese president Xi Jinping and Taiwanese president Ma Ying-Jeou comes like a curveball, given that Ma is perceived a lame-duck president and there is less than two months before presidential elections take place. Does the meeting represent the last, desperate attempt of the Ma administration to influence cross-strait relations before the end of Ma’s term? Certainly, that the meeting was announced with only a few days notice suggests that something very, very unusual is going on here.

If Ma’s meeting with Xi is a surprise, it follows in the footsteps of an earlier meeting between Xi and the ruling party Kuomingtang (KMT) chairman Eric Chu. Chu replaced Ma as KMT chairman last year, after the defeat of the KMT in the nine-in-one elections, with Ma resigning as a way of taking responsibility for the KMT’s defeat. But Chu is popularly seen as something of Ma’s puppet, in that he is a member of the Ma-led pro-China unification “Mainlander” faction of the KMT and is still subordinate to Ma, who remains a powerful figure within the KMT. In the meantime, of course, Chu has become the KMT's presidential candidate for the 2016 elections.

When Chu met with Xi, the KMT attempted to play this up as a historic breakthrough in cross-strait relations—one which only the KMT, and not the oppositional Democratic Progressive party (DPP), could have accomplished, given the special historical relation between the KMT and the Chinese Communist Party (CCP). Yet, as it had been one of Ma's long-term goal's to become the first standing Taiwanese president since the end of the Chinese Civil War and the founding of the PRC to meet with a sitting Chinese president, the Chu-Xi meeting was seen then as something of a failure on Ma’s part — suggesting that Ma would end his presidency having failed to achieve this goal and having squandered his popularity by pushing for unpopular cross-strait policies.

The other incident in the past year of a Taiwanese high official visiting China was, of course, Lien Chan’s visit to China on the occasion of the large military parade held in September 2015. Lien’s visit to China was, in fact, condemned by even the KMT—it appears that Lien decided on his own to go to China, in a sense taking Taiwanese foreign policy into his own hands.

Both Lien’s and Chu’s visits to China were likely to provoke strong reactions from the Taiwanese public. Which raises the question: What exactly does Ma  intend to accomplish here? It is merely that, as a lame-duck president with less than two months left in his term, Ma believes he can behave with complete abandon and total disregard for public opinion?

Why is Ma ignoring public outrage?

Even if Ma and Xi have both vowed that no real policy decisions would come out of this meeting, it is also true that the meeting is probably meant more for show than anything else. Ma and Xi can be in communication anytime they want—there is no need to broadcast this publicly. It seems likely that Ma’s meeting with Xi is to further demonstrate that the KMT has a special ability to manage cross-strait relations which the DPP lacks, especially as this moment of crisis for the KMT, before elections in which the KMT not only stands to lose the presidency, but is also more unpopular than ever before in history, with even asked its continued viability in question.

Probably KMT’s hope is that the meeting would demonstrate, once again, the special ability of the KMT to conduct negotiations with the CCP in order to maintain cross-strait stability. In this way, Ma and Xi's meeting would offer a rational for the KMT's continued existence. That is, even if the KMT looks very unlikely to win the presidency, the existence of the party remains a critical factor in Taiwan's maintaining cross-strait stability. For while members of the international press will descend upon the event from afar—with little knowledge of the past year’s events—and probably report quite wrongly that this meeting is a sign of improving China-Taiwan relations, the meeting will in fact influence how cross-strait relations between Taiwan and China are perceived by the international world.

It is also very likely that the historic nature of the Ma-Xi meeting would help stablize the KMT's internal crisis. As evidenced in Hung Hsiu-chu's bid for the presidency and the struggle to oust her as the candidate of the KMT, it would appear that dangerous pro-unification deep-blue extremists are threatening to take control of the KMT. But the historic nature of a Taiwanese KMT president meeting with a Chinese president might be viewed as a victory for the party as a whole, and in that way consolidate the internal divisions which have emerged within the “mainland faction” of the KMT in wake of the rise and fall of Hung Hsiu-Chu. This, however, might well aggravate the “Taiwanese faction” of the KMT, at a moment where there is tension over whether the leader of the “Taiwanese faction”, Wang Jinpyng, would be allowed to seek another term as legislator. So there would also seem to be something complicated going on with the KMT internally in the run-up to this meeting.

But Taiwanese civil society will not take this sitting down. Ma seems to have learned few lessons about continuing to push through unpopular cross-strait policies in the past year, post-Sunflower Movement, and we have seen eruptions of spontaneous protest every time he has done this. In the run-up to this summer’s Ministry of Education occupation, for example, we saw spontaneous outbursts of protest against the Ma administration's decision to have Taiwan apply for the China-led Asian Infrastructure Investment Bank on March 31st—with over a thousand protesters gathering outside the presidential residence. This time will be no different—and no doubt, after the past year of continual protests, even the Ma administration realizes this at this point. It's just that it does not care, or is laboring under the delusion it can shrug off mass protests from Taiwan’s youth as being of little consequence.

Calls for action have already come from leading figures of civil society such as Huang Kuo-Chang of the Sunflower Movement fame and rock star Freddy Lim, both members of the New Power Party, and condemnations from the Social Democratic Party and Free Taiwan Party. Huang Kuo-Chang and Freddy Lim called for a mobilization to be held on the morning November 4 outside of the Legislative Yuan. Regardless of what happened there, as Ma’s meeting with Xi is slated to happen over the weekend, there's no doubt that protests will take place over the weekend as well.

The heat is on. Two months after July's textbook protests there's been a lull in action, likely due to exhaustion. But it may be time for activists to mobilize once again. Taiwanese civil society will not go down without a fight.