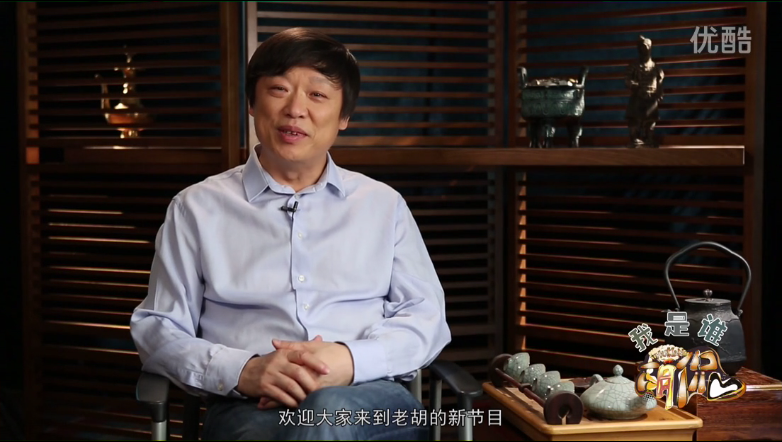 Hu is publicly regarded as a flamboyant, ultra-leftist character who makes use of the Global Times to court the government by fueling zealous brands of patriotism and nationalism — two ideas endorsed by Chinese Communist Party officials in recent years. His controversial views have also boosted the publication's circulation.

Recently, Hu decided to further promote himself and his views using another medium — online talk show. His first try came in September 2015, when he made an appearance in a short video defending communism in response to Chinese real estate tycoon Ren Zhiqiang's criticism of the Communist Youth League's assertion that “we are successors of communism.”

Now Hu has debuted a new talk show online — “Hu’s Talking” or Hu Kan in Chinese. He proudly claims it is “the first Chinese talk show that comments on global current affairs,” and in the first episode he knocked the use of disparaging terms for “patriotic” Chinese.

‘What kind of people invented this terrible word?’

Hu launched his debut episode on Chinese Twitter-like Weibo with the following message:

Since I have spent my time in the realm of opinion, I won't leave it. The Global Times has been a “manhood” [meaning a man forcibly enlisted in the army for the ideological battle] serving this era. Only if I were old would I have the right to step away. Today I return to Weibo with my video program “Hu Kan,” the visualization of the values of Global Times and me. The era we live in bestows a role on us all, and I must do my utmost to responsibly perform it. Just see me as “Hu Kan.” Cherish diversity and long live unity.

He kickstarted the show, which opens with a professionally animated sequence featuring a cartoon version of himself, by addressing the political labels that have been attached to him. He then attempted to present the “real Hu Xijin“ by reminiscing about when he entered college following the turbulent Cultural Revolution — the violent campaign led by Chairman Mao to rid Chinese society of elements deemed anti-communist — and his time working as a war correspondent in Bosnia-Herzegovina.

During the latter topic, he made use of his foreign linguistic knowledge to condemn the popular use of the term “patriotic thief” on China’s Internet to refer to those who are overzealous or inappropriate in their love of country:

For a while, a certain word on the Internet has been making people angry. That word is “patriotic thief.” The first time I saw this word, it astonished me. What kind of people invented this terrible word? But there it is, just circulating on the Internet… I know that in English, Russian and Serbian, you can't stick the words “patriot” and “thief” together. [Some people] even feel proud. Only the Chinese created this kind of people! Now some people constantly ridicule patriotism. In the ideological or political struggle, they claim, “I love the country but do not love the government” or such and such. [They] have fabricated a lot of reasons.

There is also the term “patrioteer” in English, referring to “a person who gains personal interest in the name of patriotism.” I never heard of this term being deemed “the shame of English.” Words can't be “shameful” or “shameless.” Only when describing a person do they take on that distinction. In other words, labeling some words “the shame of Chinese” is indeed the shame of Chinese.

In 2012, Hu wrote an editorial suggesting that people should be “understanding of the moderate corruption of Chinese officials.” Only a year later, he seemed to betray his patriotism and put those words into practice.

In September, a photo of an official document circulating online showed that the editorial board of the People’s Daily issued a disciplinary warning to Hu, who had attended a Chinese-German media forum and had spent the budget he received to arrange his guests for a three-day tour in Poland in the summer of 2013.

One Weibo user considered Hu’s words contradictory to his behavior in real life:

Singing a patriotic tune while touring on the public's dime, patriotism is just a business. [Hu] is a typical patriotic thief.

Another Weibo user advised Hu to use his position to become one of the critical voices that Chinese society so needs:

[Hu] did not change his subservience [to the government] and should sing its praises less than he does. The nation needs critical voices. Every era’s emperor needs useful advice, as well as President Xi, it is useless to flatter him. I never heard of a person who made progress by flattering and singing praises [to the top leader]. I hope you see my suggestion.

Since his talk show was uploaded to Youku, the largest Chinese video site, it has been played over 200,000 times in two days, despite netizens flooding the comments section with negative remarks.