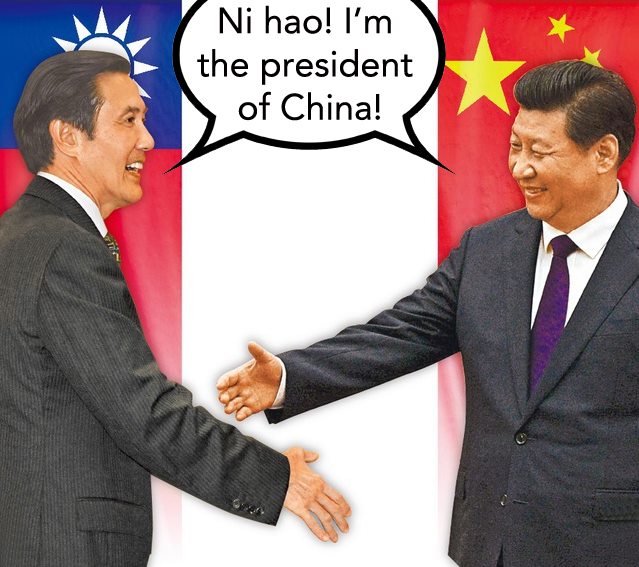 The buzz online has been non-stop since the announcement of a meeting between President Ma Ying-Jeou of Taiwan (R.O.C.) and President Xi Jinping of the People’s Republic of China (P.R.C.) to take place on Saturday, November 7, in Singapore.

While Ma's government stressed that the two presidents would address each other with the title “Mr.”, which implies the two are on equal footing in the meeting, reactions online show that netizens aren't buying such political camouflage as the diplomatic and military power imbalance between the two is so obvious.

In contrast with the positive reactions from Taiwanese political parties and international media, the majority of Taiwanese views online expressed concerns over the perceived threat that China represents to Taiwan’s much cherished sovereignty and democratic processes. Taiwan has made great effort to better its relations with China for economic benefit over the past decade, but without much payoff, observers argue. China hasn't made any indication that it's willing to recognize Taiwan as sovereign, while Taiwan's gross domestic product (GDP) is forecast to continue contracting [2] and wealth inequality remains a pressing issue.

China claims Taiwan as a rogue territory ever since the Kuomintang (KMT) retreated to the island following defeat at the hands of the communists in the Chinese civil war during the late 1940s, although the mainland has no control over the self-ruling state of Taiwan. Beijing has threatened [3] using force to retake Taiwan if it were to ever make a formal bid for independence.

The leaders of the Chinese Communist Party and the KMT haven't met together since 1945. Some reactions to the historic meeting took the form of satirical caricatures, drawing on the public's reactions and predicting the possible scenarios and conditions for the cross-strait summit. On Facebook, TaiwanExplorer made fun of the claim that both presidents are the rightful leaders of China (see image on top). 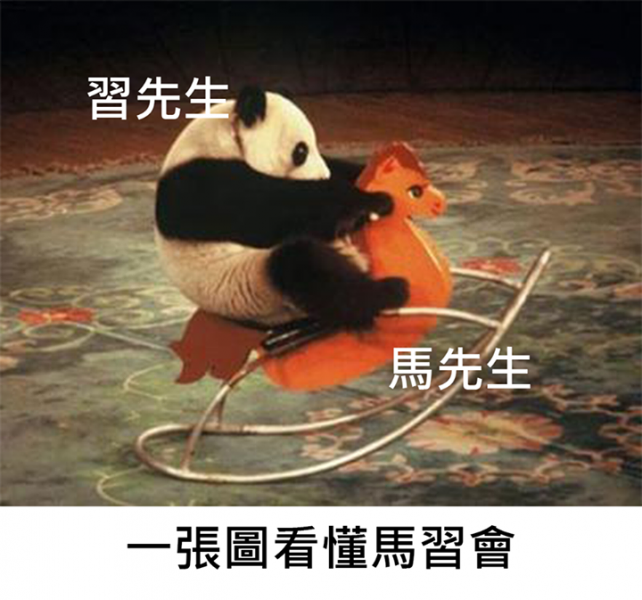 Netizens also shared a video [5] showing President Ma back in 2011 when he made a public promise not to meet with any Chinese officials during his term as president.

Calls for his impeachment have also circulated, as many accuse Ma, who belongs to the Kuomintang (KMT) party, of trying one last attempt to put himself into the history books without caring for Taiwan’s democratic process. But such views have been repressed by pro-government media. A professor wrote on the opinion page of Taiwanese publication CommonWealth Magazine, which is an advocate of the current government's policy on forging closer economic ties with China, criticizing the meeting and calling for President Ma's impeachment, but the piece was taken down [6] by the editorial board for being inappropriate.

Lin Feifan, a former student activist, raised a number of questions [7] on his Facebook page immediately after the news of the meeting was announced:

We all know that Ma Ying-jeou is trying to fulfill his dream of a Ma-Xi meeting and [it is now] the most important moment for this dream, but why has he been holding these cards for so long? Why did they suddenly become visible [to the public]?

We want to know what the benefits of cross-strait exchanges are. What sort of outcome is hoped to be accomplished with the Ma-Xi meeting? Are the expectations of the Ma government the same as those of the Taiwanese people?

Without public opinion as the basis and without having gone through the people’s consent to carry out cross-strait exchanges, they have not only again and again received public opposition, but they have also gone as far as to create a constitutional crisis… In regards to Ma Ying-jeou, there is nothing more to say.

Also widely distributed on the web was commentary [8] written by Assistant Professor Tao Yi-fen from National Taiwan University, published on The Initium, an online media outlet based in Hong Kong. Tao explained why President Xi agreed to meet with President Ma:

The fact is that Beijing does not consider the Taiwan issue from the context of cross-strait relations but rather from the perspective of China-U.S. and China-Japan relations. Recent Chinese actions, from building artificial reefs in the South China Sea to creating the Asian Infrastructure Investment Bank, have made the U.S. and regional neighbors become apprehensive, thus gradually causing a new containment strategy seen through the rapid establishment of the Trans-Pacific Partnership and the U.S. Navy navigating the 12 nautical miles of the South China Sea in order to test the rights of freedom of navigation.

Tao went on to emphasize that Taiwan’s democratic assets must be cherished collectively not just by the people of Taiwan, but also Hong Kong and China:

Democratization in Taiwan has already taken place for more than 20 years, and Taiwan has already spent much of its time on cross-strait relations. Originally, the 2016 elections was going to become an election about issues, such as governance abilities, education, employment, taxes, social welfare, etc. The raid-like timing of the Ma-Xi meeting will change the progress of Taiwan politics in a dramatic way. This will become a collective point of concern for the people of Taiwan, Hong Kong and China. Especially, the Ma-Xi meeting could tie up Taiwan to the Chinese track to a great degree, and this would influence regional stability and security in East Asia.

‘There is already an answer to a problem, why discuss it again?’

Nevertheless, online indignation has also turned towards the U.S. and to the main opposition party in Taiwan, the Democratic Progressive Party (DPP), for not voicing any opposition for the meeting to be held.

A blogger known as Subing [9] was quoted in the PPT bulletin board system predicting the response by the DPP and its chairwoman and presidential candidate Tsai Ing-wen:

I foresee that the Tsai camp will not voice substantial opposition to the Ma-Xi meeting if the U.S. is not to make too much of a reaction either. This only represents that there is already equilibrium between the four sides, which are the KMT, DPP, China and the U.S. This also explains why Taiwan was not incorporated into the Obama-Xi meeting agenda because as there is already an answer to a problem, why discuss it again?

In public opinion polls, the percentages against the meeting taking place varied. A popular blogger [10], who writes about Taiwan news in English, combined many articles about the Ma-Xi meeting discussing why the poll numbers differed between the media outlets. He also conducted an informal poll himself, explaining:

I polled a couple of my classes anonymously. My students were fairly divided with majority not in favor of this meeting, and a clear majority thinking it would not help the KMT, so I suspect Froze is right and there might well be majority support, though the reasons will vary across groups (lots of us support this meeting because we see it as bad for the KMT).