Iran Has Departed From Quranic Punishments Before, Despite What Hardliners Say 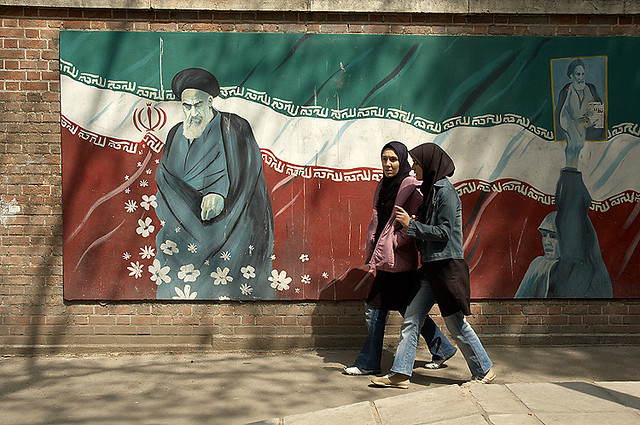 A mural of the founder of the Islamic Republic, Ayatollah Ruhollah Khomeini, outside of the former U.S. Embassy in Tehran. Khomeini eventually agreed that there could be divergence from strict Sharia law that abides by punishments the U.N. deems as torture. Image by Kamyar Adl (CC BY 2.0).

A battle over the necessity of strict adherence to Islamic law, including Quranic punishments designated by the UN as tantamount to torture, has been underway in Iran since the founding of the Islamic Republic in 1979. The heated debate continues to the present day. Yet the views of leading clerics on the need for flexibility to meet modern standards would surprise some of the hardliners advocating for strict adherence.

In fact, Iranian Chief Justice Ayatollah Sadegh Larijani’s rejection of any departure from strict Islamic law is in direct contradiction to the views and practices of the founder of the Islamic Republic of Iran, Ayatollah Ruhollah Khomeini, who explicitly allowed for flexibility in adherence to Islamic law in accordance with contemporary circumstances.

In particular, Larijani has rejected any criticism of, or departure from, qisas, or retributive punishments, which allow victims’ families to request punishments from the perpetrator equivalent to the crime, including death in cases of murder. This is commonly known as the so-called “eye-for-an-eye” principle.

Larijani was quoted as saying on the Judiciary’s official website:

Human rights pressures have again started against the Islamic Republic of Iran and they are bringing up the issue of qisas. But we have reminded them many times that it is not the West’s business to comment on how Islamic countries run their affairs [according to] Islamic laws. Qisas is a Quranic right and the Islamic Republic of Iran will never retreat from its divine values.

Larijani’s refusal to retreat from retributive criminal punishments, which have contributed to the record number of executions in Iran, has been a common theme in recent years. In February 2014 he said, “Human rights controversies regarding issues such as qisas have roots in certain Western political philosophies aimed at imposing secular values on us.”

That same year, Larijani launched an attack on religious intellectuals who have argued that some religious laws could be put on hold. “When we remind these pseudo-intellectuals about Islamic principles, they say Islam has many interpretations. But in fact Islam is nothing other that what the Imam [Khomeini] described as ‘pure Mohammedan Islam’,” the chief justice said.

One prominent religious intellectual who has been a harsh critic of Larijani is Mohammad Mojtahed Shabestari. In his December 2013 commentary addressed to Sadegh Larijani, he wrote:

They argue that today’s Muslims are obliged to carry out punishments by execution because qisas exists as part of the Quran. This argument is false because the existence of a law in the Quran does not require Muslims to act upon it forever. That is where basic differences begin between new religious thinkers and the likes of Mr. Chief Justice.

“If Mr. Larijani had said that he would not allow new interpretations of Islam taking shape, that would have been completely understandable. But he digresses and says there are no variations in interpreting Islam!” Shabestari added.

Following the August 2014 release of the U.N. secretary general’s highly critical report on the state of human rights in Iran and, in particular, the secretary general’s criticism of the wave of executions, Larijani’s reaction was to lash out at the international community.

“No one has the right to tell us to stop believing in the only Truth in the whole world [Islam]. Who does the U.N. secretary general think he is to tell us we must stop executions?” Larijani angrily asked.

‘No room for mercy in implementing divine laws’

The chief justice represents a faction within the ruling establishment that believes religious laws must be carried out without any modification. Among those who see themselves as the last word on Islamic law, Ayatollah Mesbah Yazdi in Qom is considered to be the most extreme. “There’s no room for mercy in implementing divine laws. You can neither go beyond Islamic laws nor come up short in carrying them out,” he said in November 2009.

In a later speech Yazdi reiterated, “There are those in our Islamic society who we did not expect would speak against divine laws. But even though God’s work is based on love and mercy, we must realize that God is not just merciful. He also takes revenge.”

Iran’s Supreme Leader Ayatollah Khamenei has expressed similar views in opposition to what is known as “Merciful Islam.” 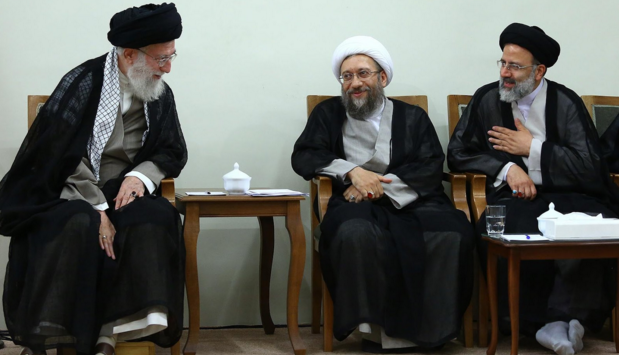 The Supreme Leader Ayatallah Khamenei sits in discussion with other prominent clerical figures, including Sadegh Larijani, the head of the Judiciary. Both men do not believe in “merciful Islam” and do not wish to change the country's Islamic punishments. Image from ICHRI.

One of the biggest clashes in this debate took place in the spring of 1981, when political groups opposed to religious rule criticized the Qisas Bill (or law of retribution), which had been introduced into the Iranian Parliament. This essentially codified the doctrine of “an eye-for-an-eye” punishment in the judicial process, replacing the the Public Punishment Laws that were used since 1924. They said it was against humanitarian principles. The National Front political party, which led the opposition against the Bill, even tried to organize a protest rally in Tehran.

In an angry response, Ayatollah Khomeini rejected any criticism of the implementation of Islamic laws and said: “The Qisas Bill is the same as what is in the Quran. Those who are calling for demonstrations are in fact inviting people to rise against the Quran and obligatory Islamic laws!” Setting a new precedent, Khomeini declared that the National Front was guilty of “heresy,” and qisas became one of the ideological pillars of the Islamic Republic.

However, over time problems in implementing some Islamic laws eventually led Khomeini to change his view and declare that the state had the authority to stop implementation of an Islamic law if deemed necessary. In a letter to then President Ali Khamenei, Khomeini wrote: “I declare that the State is an extension of the absolute rule of the Prophet of God, May Peace Be Upon Him. This is among the first ordinances of Islam, and has precedence over all secondary ordinances, even prayer, fasting or pilgrimage.”

Khomeini then ordered the formation of the Expediency Discernment Council to finalize disputes between Parliament and the Council of Guardians, the two legislative bodies which were locked in an endless dispute over adherence to Islamic laws. In resolving these disputes, the new council was given the authority to make decisions contrary to traditional Sharia, or Islamic law. In essence, Khomeini’s solution was an admission that Sharia could be modified in the face of modern realities and necessities.

Former senior Judiciary official Hossein Mousavi Tabrizi recalled in a February 22, 1998, article in the Khordad newspaper a meeting he held with Khomeini in which the founder of the Islamic Republic expressed his opposition to stoning. “In one of my meetings with Imam Khomeini regarding punishing adulterers by stoning, [Khomeini] said stoning is not in our interest at this time because we have many enemies who are promoting propaganda against us and we should not be helping them with our own actions.”

In another example of the Islamic Republic’s willingness to depart from Quranic law in the interest of the state, former Chief Justice Ayatollah Hashemi Shahroudi issued a directive on January 30, 2007, to put a stop to public executions. Shahroudi also ordered an end to stonings.

The history of the ideological battles regarding adherence to Quranic law in the Islamic Republic does not support Chief Justice Larijani’s view that all Islamic laws must always be fully followed. Yet the Judiciary and other hardline institutions continue to use repressive laws and unyielding adherence to Quranic principles as a political tool against reformist factions and other ideological foes, including religious individuals.

When strict adherence to Islamic law contradicts Iran’s compliance with international rights covenants to which it has freely signed, or directly violates international standards of basic human rights, the international community should speak out against such practices and support the voices of those inside Iran who seek to persuade the authorities to find alternatives to Islamic laws that are in line with basic humanitarian principles.