Protest Activity On the Rise In Russia, Study Finds 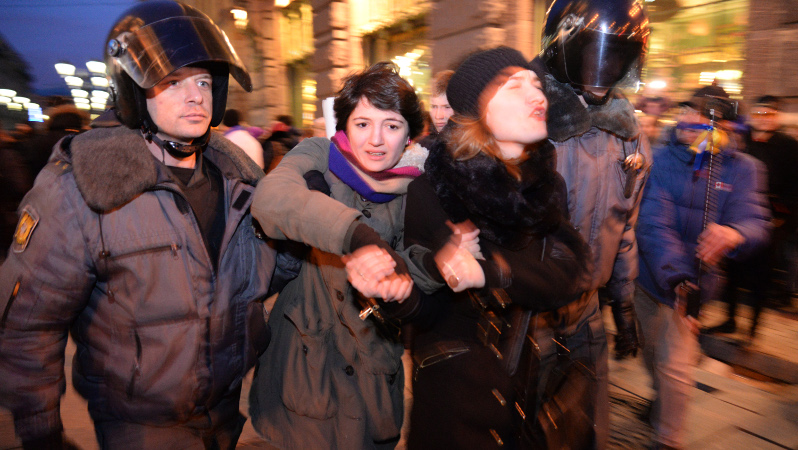 Protesters detained at rally in support of Bolotnaya prisoners held in St. Petersburg on February 24, 2014. Photo by Yury Goldenshtein for Demotix.

Russians are becoming more vocal in their criticism of the authorities, according to the findings of a monitoring study by the Committee of Civic Initiatives. During the first half of 2015 (January 1 to June 1), the overall protest activity in Russia recorded by the experts grew almost 15 percent compared to the first half of 2014.

The Committee of Civic Initiatives monitors the social-economic and political tensions in all of Russia's regions and uses reports from mainstream media and wire services about public protest actions to assess the level of dissent. Together with protest activity, the Committee's sociologists, political scientists, and economists also rank the regions by socio-economic status (salaries, benefits, welfare) and the internal political context (local political systems and events).

The protest activities recorded by the the monitors include “political protests,” but also social issues, labor rights, transportation and other urban matters, and environmental issues. Experts note that internal political matters won over external and international politics in 2015 (including the Ukrainian conflict), while social issues were as important to Russians in 2015 as a year ago.

Alexey Titkov, a senior researcher at the Higher School of Economics and one of the authors of the monitoring report, told RBC news agency that the 15-percent increase was a relative figure. “It's not like we counted the number of people participating in each protest action,” Titkov said. “The growth in the volume of protest activity simply means that this year the regions have seen an increase in the number of protest actions and that people are voicing their discontent with certain issues more often and are more vocal about it. These two indicators were added up in our analysis.” 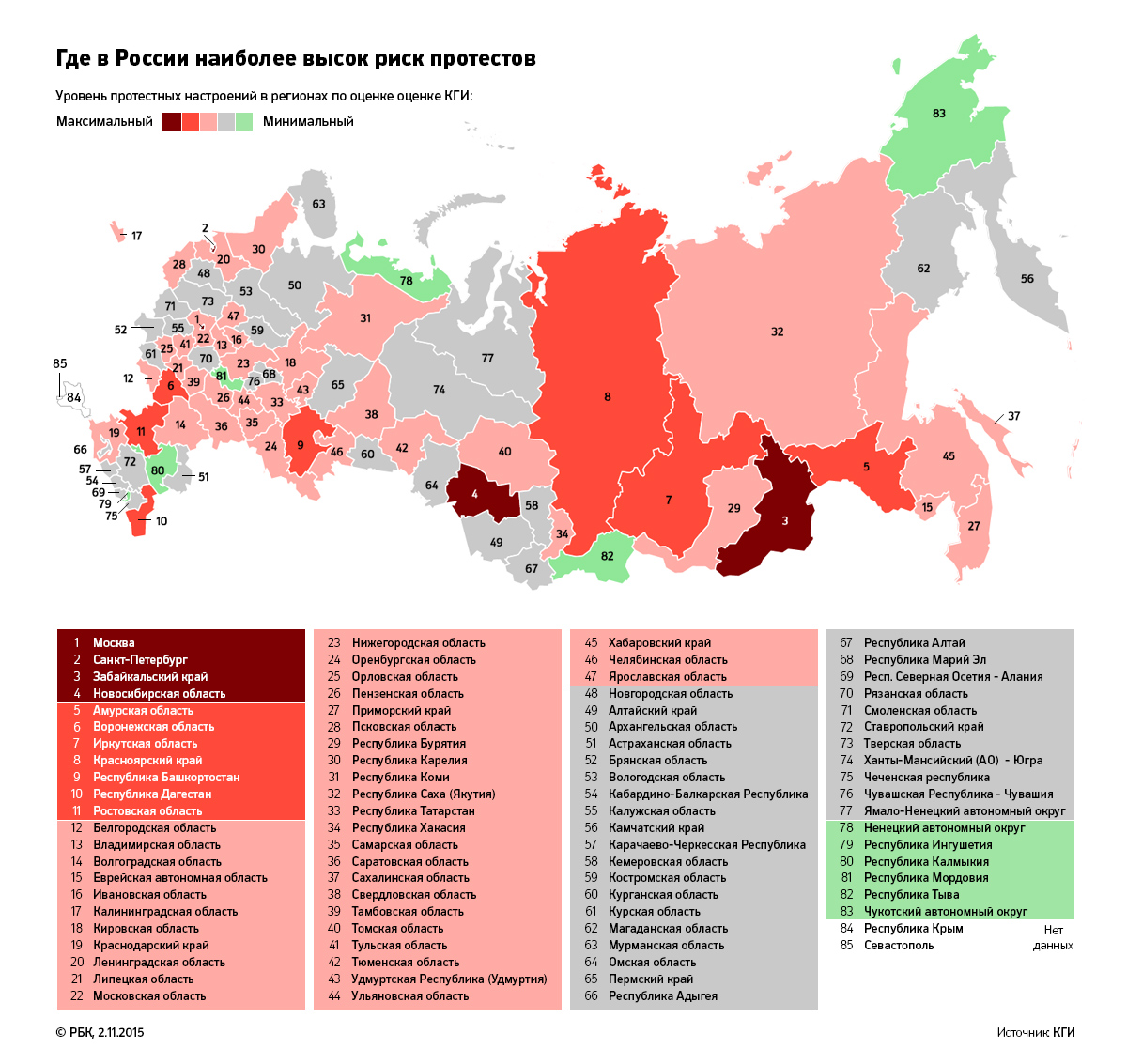 “Risk of protests most likely occurring in Russia by region.” Infographic by RBC news agency.

This infographic made by RBC breaks down the protest moods and activity by region and shows where in Russia protests are more likely to occur at any given time. The areas marked in dark red—Moscow, St. Petersburg, Novosibirsk region and Zabaykalsky region—lead in the list of regions most at risk of protest.

In many Russian regions there is no tradition of reacting to unsatisfactory social policies with mass protests, according to political scientist Aleksandr Kynev, who also co-authored the study. Instead, Kynev told RBC, the reaction takes the form of “protest voting,” when citizens go to the polls to express their dissatisfaction with their votes. The report's authors conclude that the overall rise in protest sentiment will also lead to an increase in protest voting in the 38 regions that are set to hold local elections in December of 2016. And, if local authorities try to use administrative pressure to stifle dissent among voters, that could lead to protest spilling out into the streets.

Despite the growing protest activity in Russia, the experts at the Committee of Civic Initiatives don't yet see a pretext for mass protests like the ones that shook Moscow after the State Duma elections in December 2011. Although the study didn't attempt to construct a detailed forecast of the probability of mass socio-economic protest, Titkov explains that the groups protesting in the regions due to dissatisfaction with their socio-economic status and the groups that protested during the Winter of Discontent in 2011-2012 don't really overlap, so it's unlikely that mass protests of the same scale could occur for socio-economic reasons.

The Committee on Civic Initiatives is a Russian non-profit organization that bills itself as a “non-political union of professionals in economics, science, education, healthcare, culture and other spheres of life” working for the development of Russia. It was founded in 2012 by Alexey Kudrin (former Russian finance minister, 2000-2011) and a number of other political and civic personalities.