One Man's Revenge Against Russian Propaganda 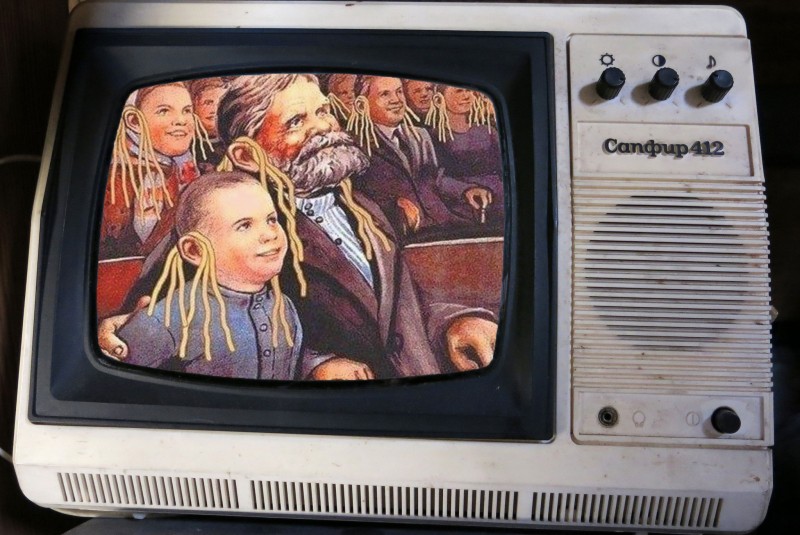 “Noodleremover” on the boob tube. Photo of Soviet television from Flickr. CC 2.0. Edited by Kevin Rothrock.

He used to work for the Russian state media, heading RIA Novosti’s inoSMI.ru project, which translates the foreign-language media into Russian. Today, Alexey Kovalev is taking revenge on the people he says destroyed his country’s state media. His weapon is a new website called Noodleremover.news, a play on the Russian phrase “noodles on your ears,” which translates loosely to “a cock-and-bull story.”

The project (which Kovalev says began as Facebook posts and graduated to Medium.com, before he bought his own domain) takes aim at false and misleading reports in the Russian media—particularly stories about popular and expert opinion in the West about Russia.

One of Kovalev’s recent texts addressed how the Russian Defense Ministry’s TV network invented a fake interview with the Ukrainian Prime Minister, where Arseniy Yatsenyuk supposedly accused former Prime Minister Yulia Tymoshenko of sexual harassment. Another post looked at how American evangelicals have helped shape Russia’s crackdown on gay rights, while praising Vladimir Putin along the way. “In order to gain access to new markets and sponsors,” Kovalev writes, “[homophobic evangelicals] need to rave about whatever local tsar there is, whose people go hungry, while they blather on TV about spiritual values and 90-percent approval ratings.”

Noodleremover made its biggest splash yet with a text published on September 18, titled “Russia Today, Information War, and Billions of Views: How They Get Their Stats,” where Kovalev reviewed information published in English by The Daily Beast about how the Russian state network RT intentionally misinterprets data about the size of its audience to inflate claims about its influence. Kovavlev told RuNet Echo that the piece attracted more than 60,000 readers. That was the moment, he says, when he decided his new website “is really something worth doing.”

Though he says the website is “worth it,” Kovalev is still somewhat hesitant to describe Noodleremover as an effort to bring media literacy to Russians. “You can’t even translate ‘media literacy’ into Russian,” he told RuNet Echo. “‘Media gramotnost’”? It doesn’t make any sense to a Russian speaker. But I think it’s important to teach people how to consume news. Every news outlet has an agenda.”

Kovalev makes no secret of his own agenda, either. “I despise [Margarita] Simonyan [chief editor of RT and Rossiya Segodnya] for what she did to RIA,” he says. “After all, my name is on the website, and now it’s filled with all kinds of shit. And it’s really shameful to see my name next to some stupid story about how Obama is a bad dancer. If that kind of story appeared on RIA a couple of years ago, the editor would have been fired.”

Noodleremover may have started as an act of revenge, but it’s grown into something bigger. The project already has more than a thousand followers on Twitter, after launching in October 2015 and tweeting just 19 times. Kovalev says the public’s reaction has greatly encouraged his work:

I’m getting all this feedback and people are telling me, “Wow this is so fantastic. Nobody has ever done anything like this.” And I realize that it’s true. Nobody in Russia has ever even thought about how we approach a piece of news. Why did a particular story appear? Why is it being aired? What agenda does the outlet saying this have? What kind of agenda might an anonymous source have? Where does it come from? Why is it even out there?

When the first news of Russian troops in Syria broke out, I started noticing these weird little websites with next-to-zero readership (sites with maybe 100 visitors a day), but they end up being quoted by Sputnik or RT, and then they’re requoted somewhere else, and this becomes a kind of chain of legitimation. You throw something out there through an obscure website, and it’s requoted so many times that everyone forgets what the original news was. And it’s just out there. And there is this network of weird little obscure websites that just throws stuff out there. And it’s being quoted and requoted hundreds of times.

Not everyone thinks Kovalev’s project is “fantastic,” of course. Most Russians will never hear about Noodleremover, but it’s a fair guess that they’d be disinclined to embrace it, given prevailing attitudes in Russia about information. According to a national survey conducted last month by the independent polling agency the Levada Center, not only do radically more Russians trust television over the Internet (59 percent versus 37 percent), but faith in information disseminated on TV, the radio, and in newspapers is rising. Over the past three years, significantly fewer Russians have come to believe that these mass media are deceiving them. In September 2012, for instance, 55 percent of the country said it thought the media deliberately reported half truths. Three years later, that number is down to 42 percent.

Kovalev told RuNet Echo that he thinks Russians might be responding to an overload of information in the world, and turning to the outlets that offer the most comfort. The need to stay sane, he says, allows people to accept ideas and information that often amount to nonsense:

When confronted with a deluge of information, people instinctively cling to just one source (however biased it may be) just because it’s “ours.” There is a certain degree of doublethink in Russia. How much contradiction can Russians absorb without going crazy? At any point in time, they believe two opposite things. For instance, there are no Russian troops in Ukraine, but we are winning the war. Because we cannot lose. Because Russians can never lose. But there are no Russian troops in Ukraine. So whatever is broadcast, they will believe, because it’s instinctive. Even if it’s lies, we’ll believe them because it’s our guys who are telling the lies. Because everyone is lying, and we’re going to stick to our lies.

What can we expect with Russians’ loyalty to home-brewed “lies”? It’s probably here to stay. Eastern Ukraine’s war has cooled, but Moscow now finds itself in a far messier conflict in Syria, where the government’s need to control information (and the public’s “instinct” to let it) is as strong as ever. Noodleremover is a one-man campaign against this trend. Can it succeed? Kovalev says he’s not under any illusions, and acknowledges the enormous clout of the people running the Kremlin’s media empire. Still, though, here goes nothing.