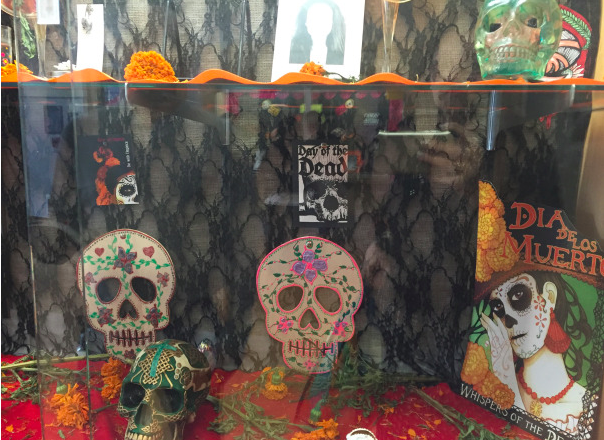 Altar made by a student at City College of San Francisco. Photo by Lupita Peimbert.

Across the United States people commemorate November 2 as the Day of the Dead (Día de Muertos), a Mexican celebration that honors people who have passed away and makes death something to think differently about.

The exquisite aesthetic of this tradition — decorated skulls, flowers, elaborate altars — have seduced Americans, becoming one of the most popular costumes during Halloween. Pop culture has also endorsed this holiday with movies like “The Book of Life” by Mexican filmmaker Guillermo del Toro and the upcoming “Coco” from Pixar studio.

Various companies interested in the large Hispanic market in the US have been adding the November 2 celebration to their marketing and community relations efforts. For example, the supermarket chain Trader Joe's decorates some of their stores with calaveritas (decorated skulls) and sells zempazuchitl flowers (marigolds), among other products.

Google's doodle on the day was made with papel picado, a typical decoration for Mexican festivities.

Not before or after.

2. It is a very important tradition in Mexico.

We grew up bringing flowers, food, and drinks to the cemetery to honor our departed loved ones. Drinking was all about them. Really.

But only a few countries in South America do.

San Francisco’s Mission District (home of the large Mexican community in the city) adopted the tradition in the 1970s, adding to it and transforming it over the years into a mix of jazzy processions New Orleans style with painted faces and costumes, and blessings by means of Aztec rituals and dancers.

5. It offers a different outlook on death.

With this Mexican-Latino festivity, people learn to not fear death and the dead, but instead to play with the concepts and to laugh about our mortality.