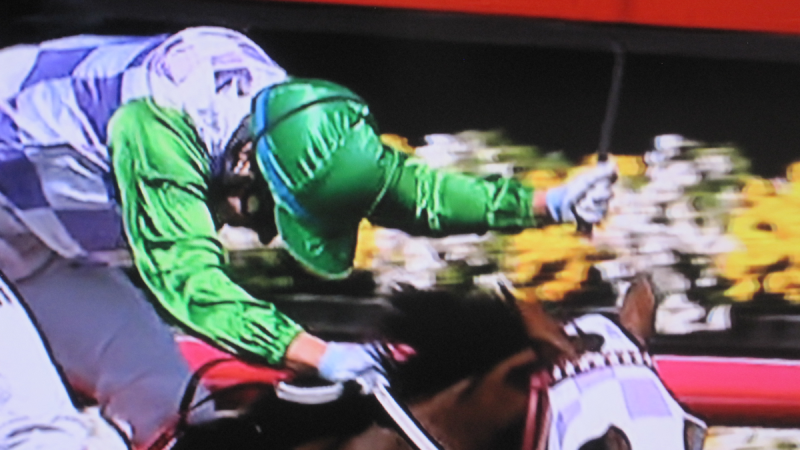 Michelle Payne has made history by being the first female jockey to win the prestigious Melbourne Cup. Her horse, Prince of Penzance, was a 100 to 1 outsider.

Where were you when the first female won the Melbourne Cup? Well done Michelle Payne. One for the ages #MelbCup

The Melbourne Cup is Australia's top race, worth over A$ 6 million (US $4.5 million). In the local cliché, it's ‘the race that stops a nation’. It is even a public holiday in Melbourne itself.

Australia-based Twitter user Red Under the Beds was jubilant:

Immediately after the race, Payne was quick to see the win as a triumph over chauvinism, saying, “But I gave it everything I got. I want to say to everyone else get stuffed, they think women aren't strong enough but we just beat the world.” Her words were picked up worldwide.

Within minutes, Payne's Twitter followers jumped by 2,000 to over 12,000. This included the Victorian State Health minister Jill Hennessy, who tweeted:

I don't think we could feel more pride & joy for you & your supporters. @mj_payne #getstuffed #MelbourneCup

It was also a very personal, family moment for Payne. Her brother Stevie, who has Down syndrome, is the horse's strapper (the person who grooms and looks after racehorses). Prior to the race, she uploaded a photo to Instagram of her brother at the barrier draw:

BuzzFeed published photos of the duo trophy in hand:

Michelle Payne @mj_payne and her brother Stevie take out the biggest race in Australia: https://t.co/ieFG0Frr5m pic.twitter.com/ht7JbXNnuR

The win overshadowed animal rights issues such as the use of the whip and the life threatening injury to three-time runner-up horse Red Cadeaux, who was last reported to be “alive and well” after surgery on its leg. Some even looked for positives:

Despite opinions on horse racing as a ‘sport’, I'm so happy for Michelle Payne and her family. She didn't needlessly whip the horse either.

Zoe Norton Lodge seemed to sum up the feelings of those conflicted:

Do horses really have to die just because you need an excuse to get drunk and wear a hat? It's a disgrace. #MelbourneCup #RedCadeaux

Payne's last tweet before the race congratulated record-breaking race caller Greg Miles. She used a hashtag that seems appropriate for her:

Awesome story on @Racing on Greg Miles! Such a gentleman and what a great caller! #sohumble

Payne's milestone comes two years after that of Gai Waterhouse, who was the first woman trainer of a Melbourne Cup winner in 2013.