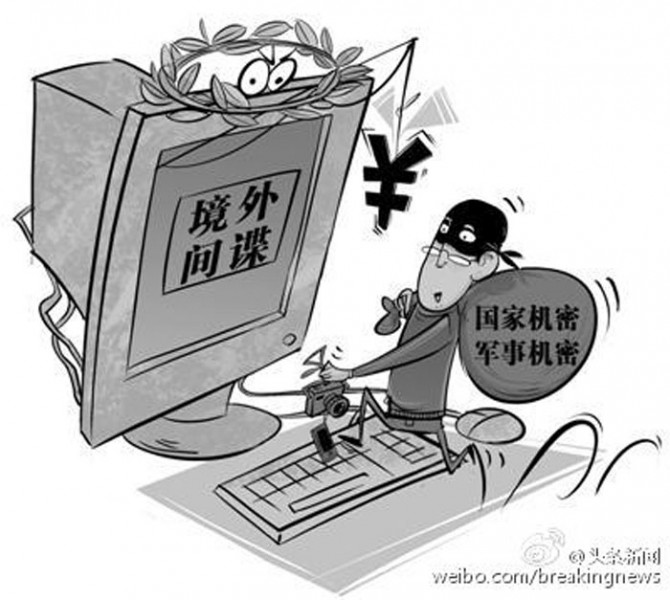 On the anniversary of the passage of a counter-espionage law in China, the National Security Bureau of the northeast province Jilin launched a national hotline — 12339 — for ordinary people to report those suspected of endangering national security.

Local hotlines have been set up in other provinces since the the counter-espionage law was approved on November 1, 2014, but the establishment of national hotline could imply the central government's endorsement of a countrywide witch hunt for “spies”.

Yet, according to news reports, the national hotline was set up by a provincial national security bureau rather than directly by central authorities. It raises a few questions. If the decision was not made by Beijing, why was the news of the national hotline promoted on major news portals which are all under the Chinese Communist Party's control? Does the provincial national security bureau have the power to run a hotline without the approval of central authorities?

Chinese netizens, for their part, looked beyond the technical aspects of the politics involved. They wondered, can ordinary people really identify a spy?

‘Big brother watching you in the streets’

The majority didn't seem to think so. Others theorized that the hotline is simply a mechanism to sow the seeds of distrust among people or even encourage people to attack each other, like what happened during the Cultural Revolution of the 1960s and 70s, when Chairman Mao led a violent campaign to rid society of those deemed anti-communist. In a news thread within the headlines section of popular Chinese social media site Weibo, some referred to the situation as “white terror”, a tactic to instigate fear and keep people in silence:

It is so easy to find an excuse to put someone in jail.

Prelude to the Cultural Revolution

White terror, big brother watching you in the streets. Encourage reporting on each others to threaten people.

Some offered up satirical remarks:

I have a feeling that the chengguan (City Urban Administrative and Law Enforcement Bureau) are spies, they were sent by foreign enemy forces to suppress ordinary people! Click “like” if you agree.

Should report on the Birth Planning Department, it attempted to make the Han race go extinct [by killing so many unborn with the One-Child Policy].

I am spy, anyone going to report me?

‘What really harms this country is corruption’

However, some people expressed their support for the reporting system. A post on “How to identify spy around you”, published by an Internet analyst with the anonymous screen name “Between coming and going”, went viral on major social media platforms, including Weibo and WeChat:

The hotline for reporting spies, 12339, has been launched. Please pay attention to suspicious people around you, including and not limited to spies, traitors, instigators, informants and foreign agents. The description below can help you identify [a suspect]:
1. Nature of their work isn't clear; has several job titles and is resourceful.
2. Those who like to put forward controversial issues and observe others’ response in gatherings. They would then make contact according to an individual's stance and solicit him or her for anti-government activities.
3. Overseas correspondents and reporters, or journalists with overseas connection; members of family churches; some NGO organizers.
4. The person has a proper job on their name card, but their working hours are irregular. The company on their name card is a shell or a newly registered company or has other suspicious traits.
5. Those who studied overseas several times, or his or her age does not match his overseas educational background.
6. Those who pay attention to sensitive topics, including but not limited to politics, military affairs, public opinion or business.
7. Those who travel to meet certain people and exchange packages or documents with them.
8. Those who attend academic conferences and business meetings regularly, talk about anti-government issues and exaggerate the advantages of foreign countries.

Yang Hengjun, a prominent current affairs commentator and a former Chinese government official who has migrated to Australia, saw the above message online and criticized it as encouraging a witch hunt:

The real spies and instigators would not have the above characteristics. On the other hand, during the Culture Revolution, such traits were used to take down spies. Everyone knows what the result of that was. According to these traits, intellectuals who are familiar with China and international affairs, online opinion leaders, public intellectuals and active netizens would fit in the profile. What the point of setting up the hotline and publicizing such profiling? You really want to return to the time when big brother was watching you on every street corner?

As far as I know, what really harms this country is corruption, and we are surrounded by it. Some of us have even been hurt. But there isn't any hotline for corruption announced with such fanfare. No one tells us how to profile the corrupt, but instead “spies” are the hot issue now. Let's put aside the fact that the identification of spies should be conducted by powerful government authorities. For ordinary people, unless they have concrete evidence, they should not report others. Everyone knows the authorities wouldn't lift a finger to clear a person's name after they were labeled a “spy”; on the other hand, the label is meant to torture the person for a lengthy period of time.

Wang pointed out that he actually fits the profile and invited others to report him:

Turns out that I fit the description entirely. Well, you can just report me. As a writer, everything becomes sensitive to write about. All posts are censored completely. I can't live like that anymore. It's better to live in jail, where you have food and a place to stay. Very likely I could win some awards [referring to overseas human right awards].