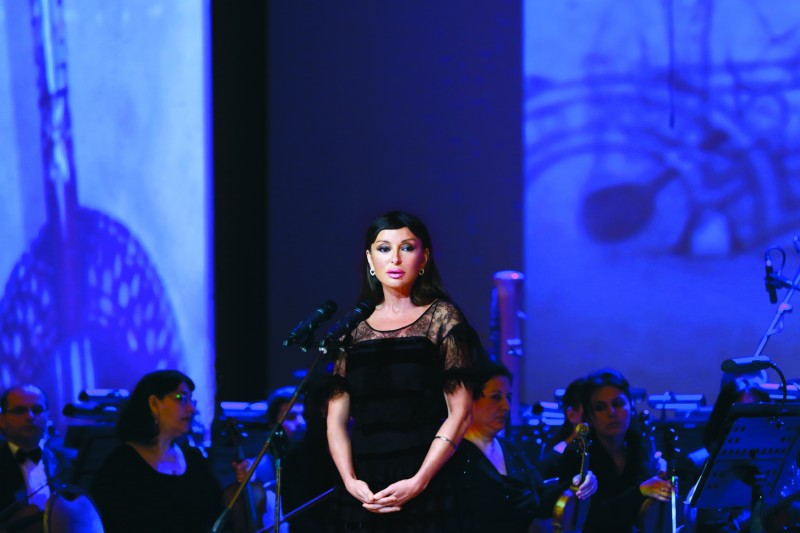 Mehriban Aliyeva, First Lady of Azerbaijan, does not make much use of her seat in parliament. Wikipedia image.

In a result that surprised nobody, the ruling party belonging to the ruling family cruised to a comfortable majority in Azerbaijan's November 1 parliamentary election.

Nevertheless, while there is nothing new about the New Azerbaijan Party loyal to President Ilham Aliyev recording a crushing electoral victory, there were some interesting features that marked this vote out from others in the past.

For one, ballot stuffing was no longer a hurried affair taking place in the final hours of election day. Already in the morning, independent observers were reporting serious violations:

Fraud. Precinct 12, at both polling stations 30 and 23, ballot stuffing. [Tweet from early on in the vote].

Carousel voting was also more efficient and better organised than in previous years. Women, students, and other mixed groups were responsible for going from one polling station to another and casting multiple votes:

This video footage below shows another dose of ballot stuffing in Surakhani's 3rd precinct. This time with the precinct chairman caught in the act.

Some Azeri officials even laughed as they cheated the citizenry, according to local reporters. Certainly the shame factor vis-a-vis vote rigging has long ago disappeared.

It has been replaced by a brute determination and confidence, embodied in the claim of newly elected MP Aflatun Amashov that “if there were violations then they were minuscule, and they wont have impact on the outcome of the elections.”

These were moreover the first elections that were not observed by any credible international monitoring mission. OSCE’s ODIHR, OSCEPA and the European Parliament all cancelled their missions ahead of the election.

The only international observers present were the representatives of the Parliamentary Assembly of the Council of Europe. But PACE’s past relations with Azerbaijan have been overshadowed by ‘caviar diplomacy’ and the compromised reports of prior monitoring missions.

Thus it was disappointing if not shocking when a PACE representative made the following statement:

Despite over 1,200 registered candidates, some 500 pulled out of the parliamentary race leaving 767 candidates running for the 125-seat parliament. Key opposition parties withdrew candidates from the race. The opposition bloc of the National Council boycotted the vote completely.

Perhaps the safest seat in the house went to President Iliyev's glamour-obsessed wife First Lady Mehriban Aliyeva, who ended up returning to office with 96.7% of votes.

Except that returning to office is a misnomer. Aliyeva has been an MP since 2005 but has rarely been seen in the legislature at her nominal place of work. No changes are expected.

According to the results announced by the Central Election Committee (CEC), New Azerbaijan did old Azerbaijan proud, securing 71 seats, while so-called independent parties and candidates — described by opposition parties outside the parliament as “fake opposition” — took the remaining seats.

The CIS observation mission — composed of representatives of other former Soviet states that also have problems holding free and fair elections — was satisfied with the outcome, noting the vote had been ‘organised well':

That is one way of describing the process. Another was coined by a local Twitter user:

[President Aliyev pictured] No! Stay home, we will fill [the ballots] out ourselves!