Why Montenegro's Opposition Leaders Want to Topple the Government 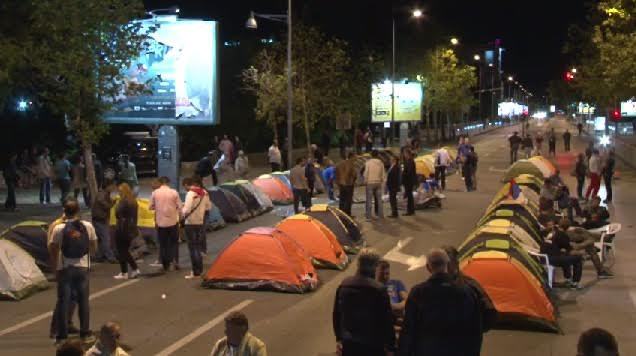 Tents set up on the street in front of the Parliament building in Podgorica. Photo by Sloboda Traži Ljude Facebook page, used with permission.

Montenegro, a small country on the Adriatic coast that has remained fairly mysterious and somewhat unnoticed throughout the recent turbulent history of the Balkans, has been making headlines in international media during the month of October.

Led by political opposition leaders, thousands of Montenegrin citizens took to the streets over the weekend of October 17, 2015, to voice their dissatisfaction with a government that has been in power for almost three decades, only to be met with police violence.

But what might appear to be a sudden turn of events to the rest of the world are no surprise to those in the region.

Prime Minister Milo Djukanovic has been running things in the country — in one way or another — since 1991. Some say Djukanovic has de facto been in power for a full 26 years, since he and Communist League members Momir Bulatović and Svetozar Marović ascended to power and took full institutional control in Montenegro in January 1989.

By some counts, he's Europe's longest-ruling non-royal leader. Djukanovic served as prime minister from 1991 to 1998, then as president of Montenegro from 1998 to 2002, and as prime minister again from 2003 to 2006, after which he announced that he was retiring from politics. He quickly came back from retirement and assumed the office of prime minister again in 2008, although skepticism that he didn't have a hand in political decisions during his short-lived retirement is rampant. 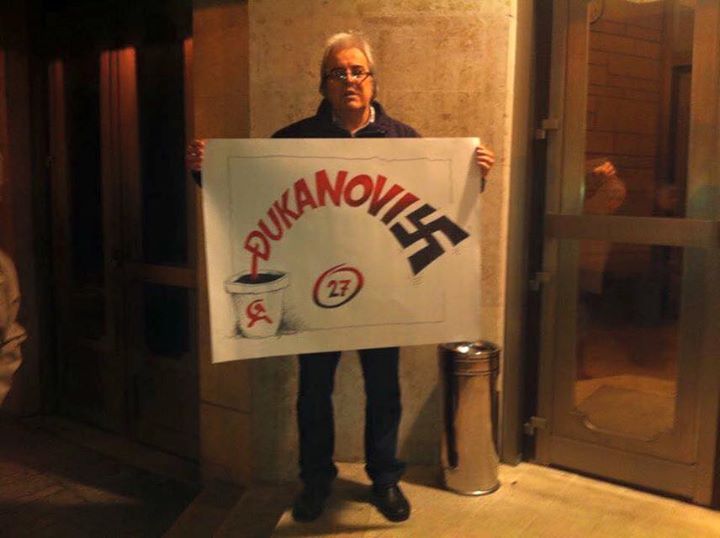 A protester in Montenegro holds an illustration that symbolizes Djukanović's almost 27 years of rule in the country – from his beginnings in the former Yugoslavia's communist party to the stronghold he has on the country today that many have called fascist. Photo by Sloboda Traži Ljude Facebook page, used with permission.

He was an ally of Slobodan Milošević, the ironfisted “Butcher of the Balkans” who ruled Serbia, then the former Yugoslavia throughout the 1990s, though he would eventually fall out with Milošević.

Djukanovic and members of his regime have also been linked to facilitating illegal activities such as smuggling, car theft rings throughout Europe, money laundering, racketeering and more, accusations that they deny. In a recent piece, Balkanist magazine describes some of the activities that Djukanovic and his associates were allegedly involved in:

When harsh war sanctions befell Montenegro, Djukanovic’s solution for rescuing the country’s exchequer was to facilitate an international cigarette-smuggling ring, in collaboration with the Italian mafia. In the process, he and his crew of crooks took a substantial share of the spoils, amassing millions offshore.

While the country's GDP has been constantly growing over the past decade and it is the only non-European Union country to introduce the euro as its official currency, Montenegro also presents one of the most corrupt governments in Europe. According to World Bank data, over 11% of the country's population officially lives below the poverty line and most people are generally unhappy with the quality of life in the country.

On October 17, led by opposition leaders, people peacefully gathered by the hundreds in downtown Podgorica and other cities to protest. The organizers set up a website and Facebook page that serve not only to call on people to join the protests, but also provide up-to-date information about the protests and incidents of police brutality during the protests. Because media in the region are often politically influenced or state-run, the organizers have also provided live YouTube coverage of the protests, saying on their website, “Don't allow the media to serve up information, watch live video coverage of the protests or follow the live blog.”

Within hours, special police forces cracked down on the protesters, leaving over 120 people injured. Official police statements and state-owned media reported that the police action had been a response to attacks on police officers by some of the protesters.

The protests continued, however, and participants set up tents on the street and in the park across from the parliament building in Podgorica.

On the night of October 24, police cracked down on protesters again, this time using what many eyewitnesses have called excessive amounts of tear gas and physical force. Many protesters were arrested, while dozens were injured.

To counter official reports that the force used by police was provoked by protesters’ attacks on officers, individuals filmed some of those who “provoked” attacks on police and posted the video to YouTube. This particular video shows several men in casual attire and hoodies, getting out of police jeeps on a parking lot in downtown Podgorica, and then heading in the direction of the protests. The claim made by organizers of the protests is that these men are police officers or hired by police to infiltrate the demonstrations and incite violence, so that police forces might have cause to react more harshly.

Other similar videos are available on the organizers’ YouTube channel, along with recordings collected showing beatings and damage of private property by police forces.

Another video, which has garnered over 150,000 views, shows some two dozen police officers surrounding a vehicle at a traffic light, beating the vehicle, then pulling its driver out onto the street and beating and kicking him. The man's name is Milorad Martinović, who happens to be the chairman of Montenegro's professional boxing association; and he was admitted to a local hospital with “serious physical injuries” after the beating.

Protesters were set on returning to the streets, however, and protests continued on October 31 . According to information being shared on social networks, demonstrations were scheduled not only in Podgorica but also for other cities across Montenegro. Protesters gathered to hear opposition leaders speak in a concert hall in Herceg Novi, while others continued to protest on the streets of Podgorica, Herceg Novi and other locations.

Seems there is no fear among the demonstrators in #Podgorica, maybe for the very first time for 25 years of Djukanovic rule #protesticg 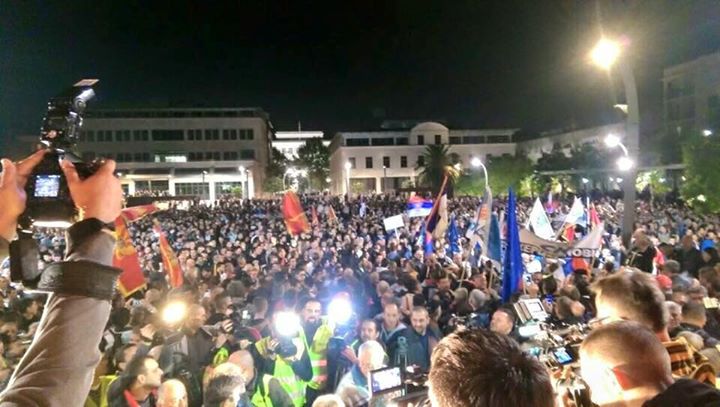 People gathered in Hergec Novi on October 31 to support weeks of protests in the capital of Podgorica. Photo by Sloboda Traži Ljude Facebook page, used with permission.