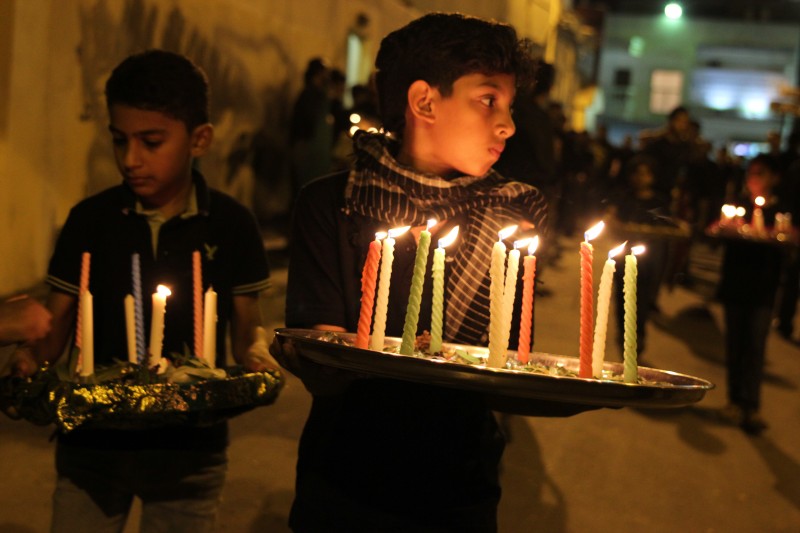 Bilad Alqadeem, Bahrain. 11th November 2013 — Ashura ceremony in Bilad alqadeem 11. — Ashura is commemorated by Shi'a Muslims as a day of mourning for the martyrdom of Husayn ibn Ali, the grandson of Muhammad at the Battle of Karbala on 10 Muharram in the year 61 AH. Photograph by bahrain14feb bilad. Copyright: Demotix. Used with permission.

Millions of people around the world gathered to commemorate the anniversary of the martyrdom of Imam Hussain bin Ali, grandson of the Prophet Mohammed. Participants took part in art galleries, blood donations and lectures, and as hundreds of thousands lined up in huge processions marking Ashura, as the day is called, the coverage of international media outlets like AFP, Yahoo, Daily Mail, RT and others, focused on a disputed bloody tradition called tatbir, which involves cutting slits in the scalps of participants.

On social media, they were criticized for portraying the story in “biased” news reports instead of showing the full picture of rituals that took place mainly in Iraq, Iran, Lebanon and Bahrain, which have large Shia communities.

Ashura is an annual remembrance of the martyrdom of Imam Hussain, marked on the 10th of the Islamic month of Muharram. Shia Muslims around the world mark this day by attending sermons on the lessons of Imam Hussain's sacrifice for justice and mourning the martyrs of the Karbala massacre that took place some 1,300 years ago.

Covering the event, AFP in particular came under fire after tweeting a picture of graphic content without prior warning. The picture showed Iraqi men who practiced self-flagellation (tatbir in Arabic) as their way of mourning.

@AFP Disturbing. And why should these be released without an advisory? What's the point?

Others, who said they related to the religious belief, described the coverage as “biased”.

@AFP I'm a shiite , this is my response to this very biased and coordinated coverage pic.twitter.com/RB3raVtX0u

@AFP If you are going to do a report on something, educate yourself properly. It's a shame with what you are doing with your power.

The tweet seems to have sparked anger over a practice that has long been disputed among Shia Muslims themselves after prominent clergymen like Iran's Supreme Leader Ayatollah Sayed Ali Khamenie said it was forbidden and against Islam.

Has the AFP not done its homework on the news story? Some replies couldn't help but to blame that this was intentional unfair coverage of a category of believers.

@AFP you showed pictures of 100 people who does this, why don't you show pictures for millions of shia who disagree with it! shame on you

@AFP all Sunnis and most Shias agree this is not Islamic.

Other media outlets have not escaped the criticism, too.

@RT_com you people need to do some research because Shias do not believe in tatbir it is forbidden in our religion!!! Understand that!

Maybe mention its largest peaceful gathering in world, people of all faiths commemorate but no they focus on tatbir. https://t.co/u7ph5kN9Y2

As the conversation went on and drifted in different directions, some thought doing AFP's homework might help in giving viewers a clearer picture of the Ashura processions.

This is also from karbala @AFP Or r u blinded by hate At the shrine of Abu Fadhil Al-Abbas (AS) today.. Ya Abbas 💚 pic.twitter.com/ydSXoEaDIc

Hashtags like #Ashura and #HussainInspires also provide a better view into the cultural and religious sides of the anniversary.

The lessons of Imam #Hussain (as)'s sacrifice in Karbala. Imp to know; even more imp to embody. #muharram1437 pic.twitter.com/ugLViIZavY

The art gallery in the Holy Shrine of Imam Hussain, [located in Karbala, Iraq].

The Enlightenment Society opens its infographic gallery in the capital Manama on Saturday evening [Bahrain].

Some shared pictures of non-Muslims who participated in activities marking Ashura.

A Thai artist in the Imam Hussain Art Gallery in Bahrain draws a marvelous symbolic picture of Imam Hussain in the 7th night of Muharram.

The processions will be held again at the start of December to mark the passing of 40 days from the death of Imam Hussain, during which the holy city of Karbala, Iran, is expected to welcome over 20 million people from across the globe. Can we expect news agencies to do a better job by showing the whole picture of the event or does selective reporting make a better story?

You can see the reports below (Warning: Graphic content)