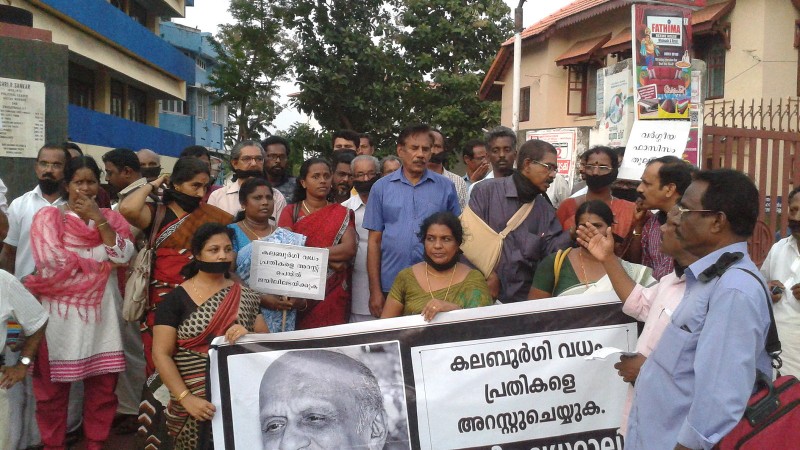 Protest at Kollam against the murder of M M Kalburgi. Image by Fotokannan via Wikimedia Commons. (5/9/2015) CC BY-SA

More than 40 writers have returned their prestigious awards from India's national academy of letters, called the Sahitya Akademi [2], to protest what they perceive as a spike in intolerance in the country. Formed in 1954, the Sahitya Akademi Award honours literary scholars from all 24 Indian languages (including English) for their exceptional contribution in the field.

Renowned writer Nayantara Sahgal was among those who gave up the award in response to the state of free expression and tolerance in India. Many noted scholars like Ashok Vajpayee, a Hindi poet, have followed the suit. Novelist Salman Rushdie took to social media, extending his support to this protest:

I support #NayantaraSahgal [3] and the many other writers protesting to the Sahitya Akademi. Alarming times for free expression in India.

India has had a long and complex history of limiting free expression, but conversations on the rise of religious intolerance have especially swirled since the 2014 election of Bharatiya Janata Party [5] (BJP), led by Prime Minister Narendra Modi.

Several high-profile cases of communal violence have fed fears that the country has indeed become more intolerant. In February 2015, Govind Pansare [6], a communist leader and intellectual who had been critical of religious fundamentalism, was shot and killed. An activist for hard-line Hindu group Sanatan Sanstha was arrested in connection with the murder.

In August 2015, M. M. Kalburgi, himself a recipient of the Sahitya Akademi award, was shot dead [7] by an unidentified man, who along with an accomplice entered his house posing as his student.

It is not unheard of for literary scholars in India to receive death threats [8]from fundamentalist groups, and Kalburgi previously had been a target. There were [9] conflicting reports as to whether state authorities [10] (with the centre-left coalition UPA government at the helm) had provided him [11] with protection following the most recent threats. Most recently for speaking out against idol worship in 2014 [12], he had angered some in the Hindu community.

Nearly 80% of India is Hindu, while a sizable minority adheres to Islam as well as other religions.

A few days after Kalburgi's murder, a 52-year-old man named Mohammed Ishlaq [13] died and his 20-year-old son was injured after they were dragged out of their home and beaten by a mob over alleged rumours of committing cow slaughter and consuming beef in Bisada, Uttar Pradesh (cows are considered sacred in the Hindu religion). Uttar Pradesh is currently under the governance of the democratic socialist Samajwadi Party [14]. Even before this government, the state had seen Hindu-Muslim clashes under the UPA government [15].

Several states in India have long had either partial or complete laws against cow slaughter or beef consumption. Meat bans have even been imposed under the UPA administration. But many of these laws haven't been completely enforced, and slaughter houses had been running unaware of the penalties that could have been imposed. With the current BJP majority, authorities across states have moved to impose the ban more aggressively [16].

In the state of Maharashtra, the law for banning beef [17] dates back to 1976, but it was then amended in 1995 to increase its scope to prohibit the slaughter of cow, bull or bullock. That amendment only received approval from the President of India in 2015 under BJP.

Rationalists argue that a beef ban threatens the foundations of secular values in a democracy. The severity of the bans directly affects religious and tribal communities in India who do consume beef.

‘Conscience keepers at threat in democracy’

These reactions from the intelligentsia community were also fuelled by the silence of Prime Minister Modi and Sahitya Akademi on the matter. Communal violence isn't new to India; however, fundamentalist groups have a certain amount of leverage under the BJP administration.

Right-wing allied groups and fundamentalists have increasingly tried to posit rationalists and people of other faiths as anti-nationalists, thereby suggesting that only ardent Hindus can truly be Indian nationalists. Currently, the BJP government struggles to maintain its relations with right-wing parties groups like Shiv Sena and Rashtriya Swayamsevak Sangh, while simultaneously juggling its own bleak stance [18] on religious intolerance. Amidst the raging controversies, Prime Minister Modi has reprimanded [19] other BJP party leaders from making any statements that might ignite any form of violence.

In a solidarity march [20] outside of the Sahitya Akademi, on 23 October 2015, writers and their supporters tied black bands around their mouths as a sign of rising intolerance in this country.

Meanwhile, Sahitya Akademi President Vishwanath Prasad Tiwari said in a press release dated 10 October 2015 [28] that he can't comment publicly until his remarks are approved by the institution's executive board. But, he added, Sahitya Akademi “condemns the attack on and murder of any writer or artist anywhere”. He further urged the writers to protect the dignity of this high standing autonomous institution and not return their awards.

On the other hand, some on social media have criticised those who returned their award, thus, questioning their credibility:

Giving Sahitya award back is the attack on Hindus ! Why didn't they gave back their award on Terrorist attacks ? #YoLiteraturesSoSecular [30]

They have encashed all they could from award and now discard it to wring even more “former Sahitya….” https://t.co/55SKhh4tle [32]

‘What’s happening in the country now is sad’

Filmmaker and poet Gulzar defended the Sahitya Akademi [34], saying that the outrage at the writers fraternity is wrongly placed as the flaw lies in the “system” or the “government”. He further said:

What’s happening in the country now is sad, but the uncertain fear it creates is also disturbing. We have never seen an atmosphere like this in India before. There never was any fear to freely voice one’s opinions. Never really thought a day would come that someone’s religion would be asked before his name.

A statement [35] signed by more than 300 artists, curators and critics in India condemned the killings and protested against the “climate of rising intolerance in India”.

As in the past, we must challenge the divisive forces through varied forms of appeal and protest, articulation and refusal. Our demand can be nothing less than that the entire range of constitutional rights and freedoms of the citizens of this country – freedom of expression and speech, right to dissent and exert difference in life choices including culture and religion – be ensured.

As of October 29 [36], almost 107 senior scientists have signed a separate statement online, protesting the attacks on rationalism and reason.